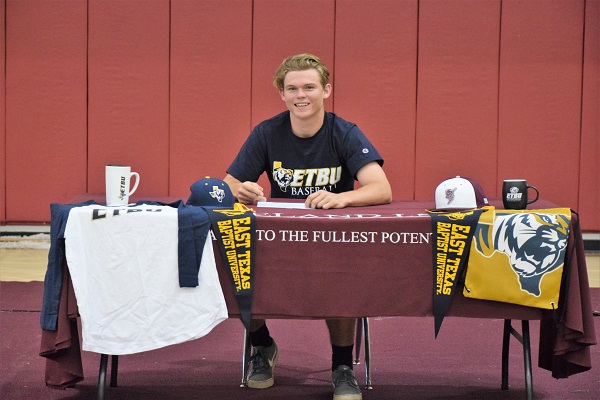 GRAPELAND – Grapeland Sandie Josh “Bear” Ackley took the next step in his educational and athletic career on Friday, May 17 as he signed his National Letter of Intent to play baseball for the East Texas Baptist University (ETBU) Tigers.

“I love the program there. The atmosphere was real nice and the coaches seemed to be great people. They were also very welcoming,” Ackley said.

Located in Marshall, ETBU is a Division III university and is a member of the American Southwest Conference. In addition, ETBU was ranked twelfth among forty-eight schools in the category of Best Baccalaureate Colleges in the West Region by U.S. News & World Report.

Ackley lettered in five sports while in high school – football, basketball, track, baseball and golf – and was asked if any programs had considered him in another sport.

“I was looked at by a couple of schools for track and then one or two for football. I had a couple of invites to go to their camps, but ETBU showed the most interest in me,” Ackley explained.

During his high school career, the newest ETBU Tiger said the biggest influences on getting to the next level were his dad and several coaches on the GHS staff.

He was also asked to recall some of his favorite moments from his stellar career as a Grapeland Sandie.

“I think one was winning state in golf. Another was hitting a homerun against Centerville to give us the lead, getting to state in basketball and going three rounds deep, twice, in football,” he said.

Once he sets foot on the ETBU campus, Ackley said his goal was not to give up and to make it through.

Specifically asked what he was recruited for, Ackley said ETBU was interested in his pitching ability.

He said he currently has four pitches in his arsenal comprised of a fastball, a curveball, a change-up and a knuckle-ball.

Questioned about his knuckler, Ackley stressed he wasn’t trying to brag but recounted a story about the pitch.

“When I played there (at ETBU) over the summer, the head coach was up in the press box. After I threw it, the home plate umpire turned around and talked to the head coach and asked him, ‘Did you just see that?’ So, I guess it does do something,” he said with a laugh.

While his knuckle-ball may fool the hitters, when questioned about his go-to pitch, Ackley didn’t hesitate and said it was his fastball.

As to what he would tell other Grapeland Sandies or Sandiettes, Ackley said it was important to work hard and to “… put yourself out there.”

He hopes to study kinesiology or biology while attending ETBU.

From all of us at The Messenger Sports, we would like to say congratulations and wish you the best of luck in your future endeavors. 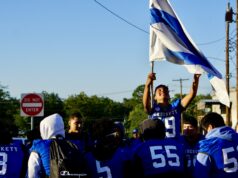 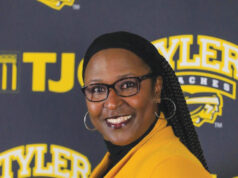 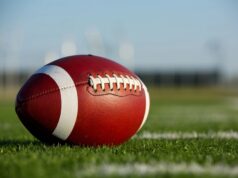