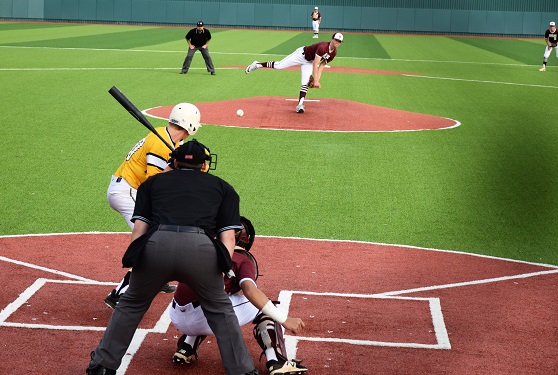 RUSK – After several changes as to where and when the Grapeland Sandies Bi-District matchup with the Alto Yellow Jackets would occur, the Sandies and Yellow Jackets decided to lock horns on the turf field at Rusk High School.

The changes were necessitated by the ever changing spring weather but when the two teams finally took the field on Friday, May 3, fans were treated to an exciting, extra-innings game. Originally scheduled as a best-of-three series, the format was also changed to a one game, winner-take-all contest.

Unfortunately for the Grapeland faithful, it was the Yellow Jackets who prevailed in a 6-5 win in the eighth inning of play. 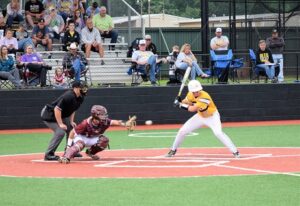 The game started out with the Sandies taking a 1-0 lead in the first inning. Foster Hall got the start for Alto and walked Justin Bobbitt to open things up. Hall managed to strike out Austin Driskell but after Bobbitt stole second, Josh Ackley delivered a run scoring single to give Grapeland the early 1-0 lead.

Grapeland could have expanded the lead after Bobbitt scored but failed to take advantage of the situation. After Ackley’s hit, he stole second and Blake Howard drew a walk. A wild pitch advanced the runners, but then Hall seemed to settle down as he caught both Cooper Sheridan and Cooper Ward looking as strike three settled into the catcher’s mitt.

Driskell got the nod for the Sandies and worked a fairly easy first inning. He got Will Dixon to ground into a 5-3 force but Hall reached safely on a dropped third strike. Todd Duplichain was up next and flew out to center while Lane Jackson struck out to end the inning.

The Sandies went quietly in the top of the second but when the Yellow Jackets came in from the field they tied the game at one.

Josh Castillo led off with a single into right field. Harmon West followed with a fly ball out and then Ryan Griffith reached on an infield error which moved Castillo to second. Cody Watson was up next and grounded out, but on the play, the runners moved to third and second.

Logan Rogers followed with a single to center which scored Castillo and moved Griffith to third. Driskell hit Dixon with a pitch but Hall grounded out to short to end the Alto threat and send the game into the third inning with score tied, 1-1.

After a scoreless third, the Sandies erupted for three runs in the top of the fourth. Ward singled and moved to second when Jonathan Luce ripped a single into left.

Lane Dreher was up next and reached on a fielder’s choice to load the bases with no outs. An error by Hall allowed Ward to scamper home to give the Sandies a 2-1 lead. Colten Franklin grounded into a fielder’s choice which caught Luce at third and then Bobbitt did the same thing as Dreher was thrown out at third.

A Driskell line drive to right plated Franklin and pushed the lead out to 3-1. An error on the play also allowed Bobbitt to score.  Howard drew a walk while Sheridan struck out to end the inning. However, the Sandies had opened up a 4-1 lead and chased Hall from the mound by the time Alto came up to bat in the bottom of the fourth.

Driskell worked an easy fourth inning as he struck out West and Griffith, gave up a single to Watson and then coaxed a pop up to second from Rogers to end the frame.

The Sandies were unable to generate any offense in the top of the fifth, but when the Yellow Jackets came in to bat, they seized the lead. Dixon led off with a single to left, but Foster Hall struck out swinging. Dixon moved to second on a Duplichain single to left but his hit was followed by a foul out from Jackson. 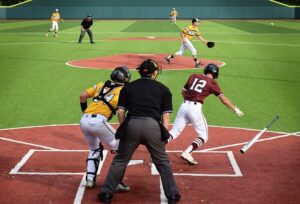 Castillo followed with a liner to center which drove in Dixon and made the score 4-2. West was up next and when Driskell made a mistake, West made him pay with a blast which cleared the wall in center by a good 50 feet. The homer also put Alto ahead 5-4.

Griffith followed with a double but Driskell finally got out of the inning when Watson struck out.

Grapeland struck back in the top of the sixth. Bobbitt led off with a triple but stayed at third when Driskell flew out to right. Ackley followed with a deep fly ball to center for the second out, but on the play, Bobbitt was able to tag up and sprint home to make the score 5-5.

The Sandies threatened to add more to their total as they loaded the bases with two outs but couldn’t get anyone home before their at-bat ended.

That was all the offense until the bottom of the eighth inning when Dixon doubled and then scored on a two out single from Jackson.