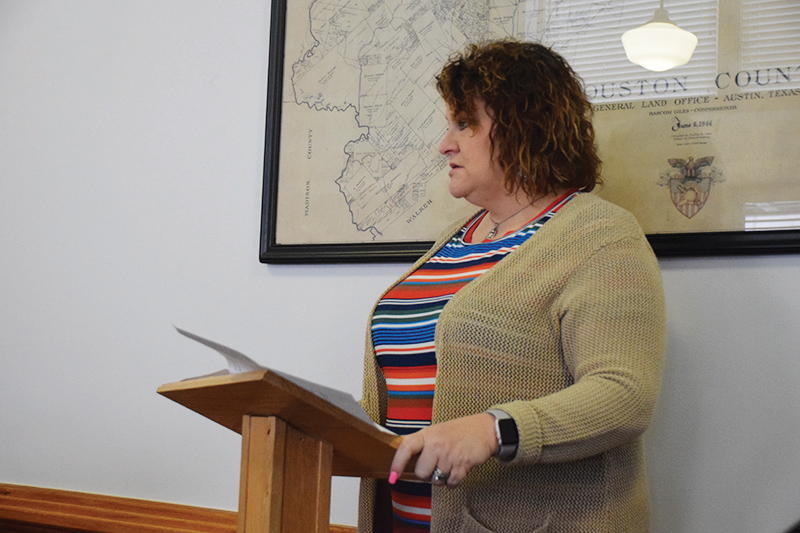 HOUSTON COUNTY – There are 254 counties in the state of Texas with 254 ideas on how to manage county government. Some of the ideas are remarkably similar while some are radically different.

One thing all 254 counties can probably agree upon, however, is their opposition to unfunded mandates. It is the bane of commissioners’ courts throughout the state and Houston County is no exception.

An unfunded mandate is a requirement set forth by a governing agency that does not provide any type of funding to facilitate the requirement.

During the most recent meeting of the Houston County Commissioners Court, held on Tuesday, Feb. 26, a resolution of opposition was unanimously passed by the court in regard to these mandates.

County Auditor Melissa Jeter explained this was a standard resolution “… circulated throughout the state by the judges and commissioners.”

The auditor said there were a few areas she wanted to highlight in this measure.

“One is the appointment of attorneys in criminal cases. These are our court-appointed attorneys funded by the jury fund,” Jeter said.

Jeter said this cost the county $238,896.75, in the most recent year. She also highlighted the cost to support the appointment of attorneys in Child Protective Services cases in the amount of $120,992.39.

In addition, Jeter explained the county was also on the hook for $274,226.94 “… to support and maintain state prisoners in county jails pending transfer to TDCJ, according to resolutions imposed by the Texas Jail Standards Commission.”

“These and other state mandatory services require $2,291,970.32 from Houston County property taxpayers and amount to 32.78 percent of the county tax rate,” the resolution stated.

The resolution of opposition was passed by a unanimous margin.

• The commissioners approved the minutes from previous meetings.

• The payment of bills and expenses incurred by the county were approved.

• The Houston County Treasurer’s report and Compensatory report were received as information by the commissioners.

• Salaries for new and/or transfer employees were approved.

• A package of resolutions and policies required by TxCDBG Contract #7218219 was approved by the court.

• The waste report from Pineywoods Sanitation was accepted as information by the court.

• Two applications for the usage of the Hotel Occupancy Tax fund were approved.