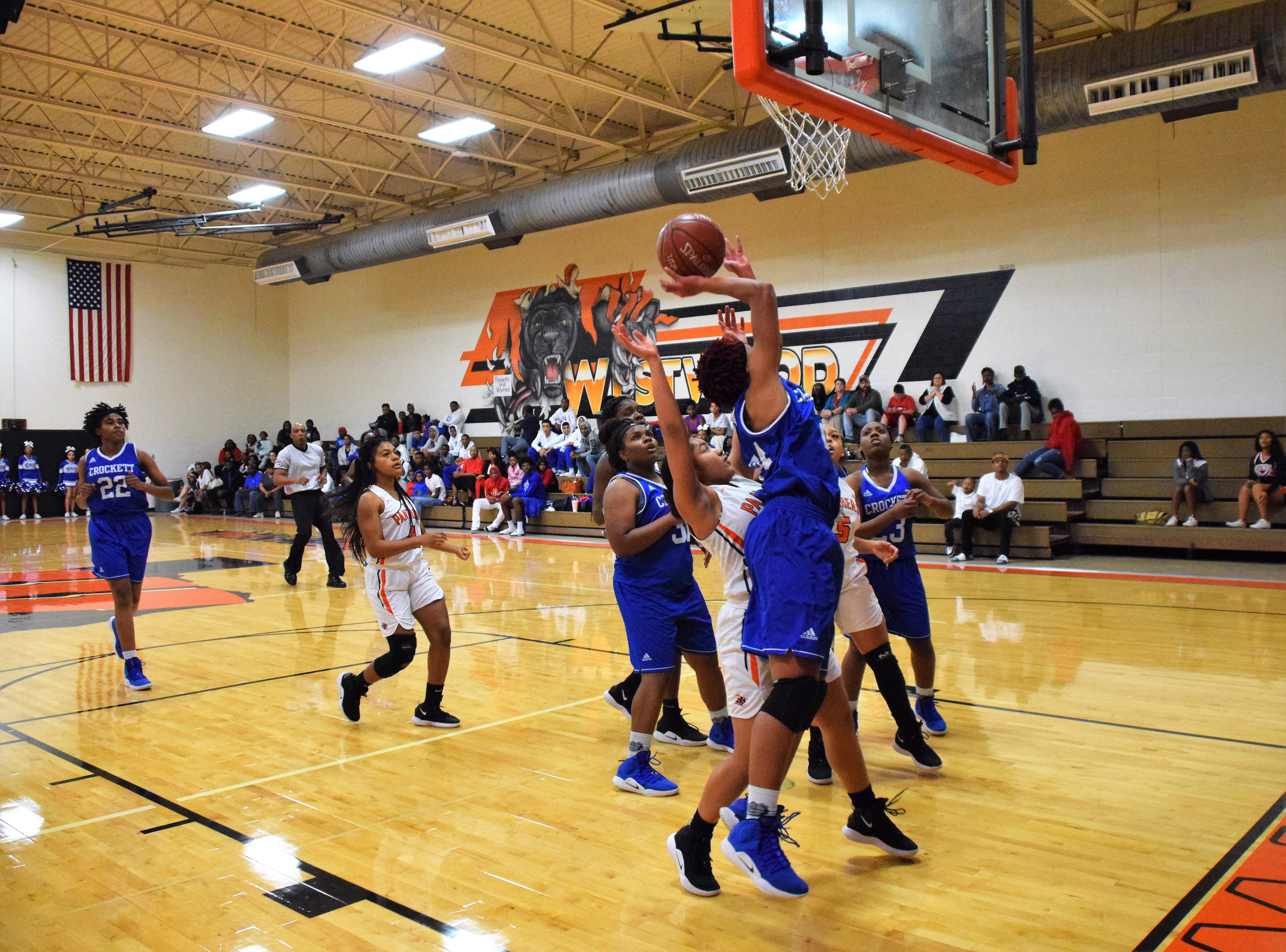 WESTWOOD – The Crockett Lady Bulldogs seemed to get some chemistry going late in the second half of their game against Frankston last Friday and it appeared to carry over when they traveled to Westwood for a tilt with the Lady Panthers on Tuesday.

The Lady Bulldogs knew if they wanted to make the playoffs, their push need to start on Tuesday night and they did just what they needed to do as they jumped out to an 18-8 lead, kept the Lady Panthers at bay and rolled to a 67-48 win.

Shots that were not falling in the previous weeks found the bottom of the net for the Lady Bulldogs in the first quarter as both Shabess Johnson and Tynaisha McKnight had six apiece. Alinjah McKnight netted four and Katelin Holmes had two as Crockett took an 18-8 lead after the first eight minutes of play.

Westwood’s Tommiana Calhoun kept the Lady Panthers in the game with a pair of three-pointers while Jyyah Godley and Monica Wilson both had one.

The second quarter saw the two teams play to a draw as both scored 14 points. Holmes took over in the period as she hit seven shots from the line to go along with a two from inside. Walker put in three and A. McKnight made a pair of free throws to give the Lady Bulldogs a 32-22 lead at halftime.

The Lady Panthers’ points came from Wilson with nine, Destiny Ellis and Anondria Mitchell with two apiece and Calhoun with one.

After the break, Johnson took over for the Lady Bulldogs as she poured in nine points in the third quarter. Jaida Lockhart broke into the scoring column with six, Walker had four and Holmes made one of two from the line to give Crockett a 52-29 lead after three periods of play.

The fourth quarter saw the Lady Panthers try and mount a comeback, but the deficit was too great for them to overcome. Calhoun paced Westwood with five while Hatten and Stephens each had four. Godley, Wilson and Destiny Ellis all had two points to close out the Westwood scoring.

Holmes led the way for Crockett with five points in the fourth while A. McKnight had four. Lockhart, Keaton Crabtree and Alexis Frias all had two as the Lady Bulldogs clawed their way to a 67-48 win.

On the game, the Lady Panthers were led by Monica Wilson with 15 points and Tommiana Calhoun with 12. Tia Hatten and Tori Stephens both had six while Destiny Ellis had four, Jyyah Godley had three and Anondria Mitchell had two.

The Lady Bulldogs were led in scoring by Katelin Holmes with a game-high 17 points. Shabess Johnson dropped in 15 and Alinjah McKnight had 10. Jaida Lockhart netted eight, Chelsea Walker had seven, Tynaisha McKnight went for six while both Keaton Crabtree and Alexis Frias both had two.

Around the Rim – Boys’ Area Basketball
Lovelady Blows Out Normangee, 66-15
Batter Up!