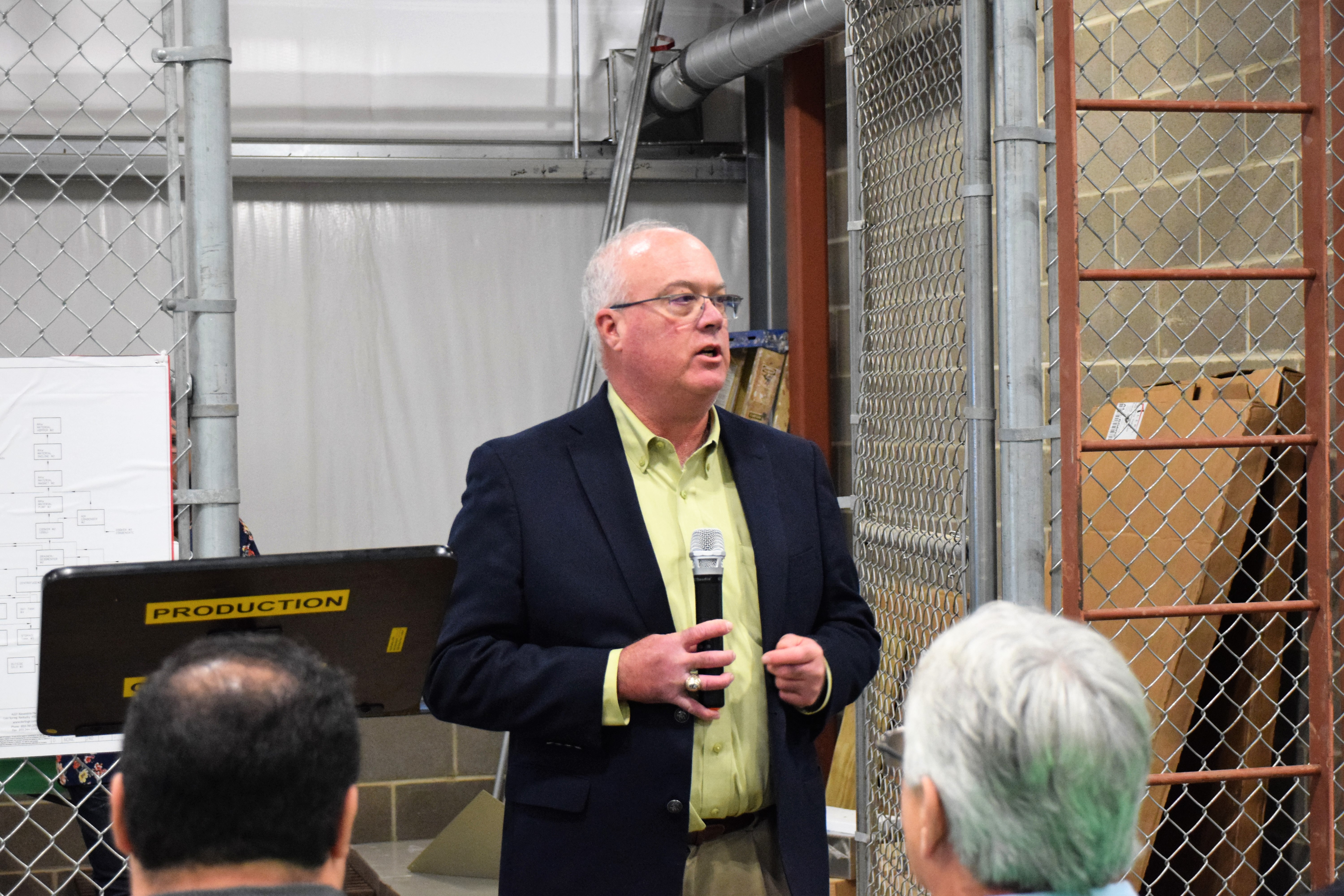 Sr. VP of Engineering and Construction for Darling Ingredients

GRAPELAND – As many of those in attendance at the Darling Ingredients, Inc. ribbon cutting began to depart, The Messenger was able to catch up with two of the key Darling Ingredients executives who helped bring the project to fruition.

The first of the two was Mike Hudlow, the Sr. Vice President of Engineering and Construction. Hudlow discussed where the facility stood operations-wise and several of the different components which went into the plant’s end products

“We are commissioning equipment as we speak,” the Sr. VP began. “Production – full production – won’t be until later in January. We will be bringing the plant online, one piece of a time over the next three or four weeks.”

Prior to the ribbon cutting, Hudlow had commented he hoped to see the facility reach a state of “business-as-usual” by the end of the first quarter of 2019.

Asked specifically what he meant, Hudlow said the Grapeland facility would be helping to support a Sanderson Farms facility in Smith County.

“We will go along with the ramp up of Sanderson Farms. Sanderson is starting on Feb. 4 with their processing plant in Tyler. They are only going to run at 20 or 25 percent capacity (initially.) Our plan is to have everything in place as they ramp up and correlate with them to process all the material,” he said.

Hudlow was also questioned as to how Grapeland first appeared on the Darling Ingredients’ radar and he replied it was because of Sanderson Farms.

“We were asked by Sanderson to build a processing plant near them. They have three facilities in this part of the state. This particular county (Houston County) fit us geographically. After we started to look at the geography, we started to look at places that had labor pools and all the resources needed to staff the facility,” he explained.

A ready supply of electricity and natural gas for the machinery were essential in the decision and Grapeland fit the bill.

“Grapeland came into play,” Hudlow continued, “because it had all of the assets to put the plant on the ground. Plus, the people of Grapeland had a wonderful attitude towards wanting business here and they were very welcoming.”

When asked what other locations were in the running to host the facility, Hudlow said other parts of Houston County were considered but the positivity and welcoming nature found in Grapeland swayed the decision “… and that was the bottom line.”

The initial start will see the Darling Ingredients facility with approximately 50 employees, but Hudlow added when “… we get going full-tilt there will be about 65. All of the truck drivers needed for the Grapeland location have been hired and several of the operators have also been hired.”

Changing gears somewhat, Hudlow was asked specifically what the Grapeland facility would produce.

“We will do a lot of things. We are going to make three products here. The first is we will make chicken meal. Chicken meal is made of parts which could have gone in to the human edible chain such as backs, necks and breast frames. We will cook them and then we’ll separate the fat and the protein meal. That protein meal goes on a pet food label as chicken meal. The fat is called chicken fat. It’s a super light – like broth. We will produce it in such a volume that it will go to the pet food business,” he said.

The third product, he said, is called feather meal.

“We take the chicken feathers and blood and pressure cook them, just like grandma used to can vegetables. It comes in as a whole feather that we turn into an ‘oatmeal.’ From the ‘oatmeal,’ they are dried down to about six percent water. They are 83 percent protein. That material goes into protein blends and fertilizer,” Hudlow indicated.

It is a slow-release nitrogen process which is often used in the growth of organic foods, he said.

“They will blend it for an animal protein source in various blends or use it in fertilizer,” he added.

“For example,” he said, “I came from Tyson Foods, the world’s largest poultry producer. If you take Tyson and Pilgrim – combined – you would have a daily pit 20 miles long by 10 feet wide to get rid of all the feathers.”

In regard to the feathers, Hudlow said they were initially used in slow release fertilizer but it was soon learned the blends could be used in cattle production.