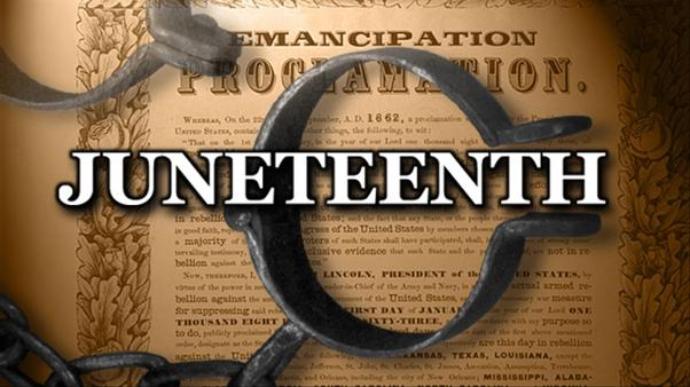 TEXAS – This Tuesday, June 19, marks the 153rd anniversary of Juneteenth. This was the date in 1865, when word of the Emancipation Proclamation finally reached the state of Texas.

It was nearly two and a half years after the U.S. abolishment of slavery in 1863, when Union Gen. Gordon Granger read the Emancipation Proclamation from a balcony in Galveston and African Americans in Texas were finally freed.

Since then, the date has become an international day of celebration and was officially declared a state holiday in 1980. Today, a Juneteenth monument on the Galveston grounds commemorates the occasion, while Galveston’s Juneteenth parade and festivities draw visitors from around the world.

Juneteenth commemorates African American freedom and emphasizes education and achievement. It is a day, a week, and in some areas a month marked with celebrations, guest speakers, picnics and family gatherings.

This year’s national theme is “Together we will see Juneteenth Independence Day become a National Day of Observance in America!” as the city of Crockett holds its 33rd Annual Juneteenth celebration on Tuesday.

The Grand Marshal of this year’s parade and celebration will be Mrs. Lynda Warfield.

The parade is scheduled for Tuesday, June 19th with the line-up starting at 9 a.m. and the parade roaring to life at 10 a.m., according to event organizer – Dr. Ianthia Fisher.

“Then, we will go to the Groves Center (on Martin Luther King Jr. Boulevard) for the opening ceremony. It will be right at 11 o’clock when we have the ceremony. During that time, we will have a proclamation and we will introduce the girls who participated in the Miss Juneteenth Pageant. We will also introduce the Women of Wisdom who are there. The Grand Marshal, Lynda Warfield will have a few words and then we will hand out some community awards,” she said.

Cliff Robinson, creator of the Juneteenth.com website wrote Juneteenth is “…. a time for reflection and rejoicing. It (Juneteenth) is a time for assessment, self-improvement and for planning the future. Its growing popularity signifies a level of maturity and dignity in America long overdue. In cities across the country, people of all races, nationalities and religions are joining hands to truthfully acknowledge a period in our history that shaped and continues to influence our society today. Sensitized to the conditions and experiences of others, only then can we make significant and lasting improvements in our society.”

N'Awlins Crawfish Festival Looks to 'Connect With the Community'
DPS to Increase Enforcement for the Holidays
Raising Blind Awareness: Percilla resident walks from Crockett to Grapeland
Please follow and like us: