HOUSTON COUNTY – A capacity crowd greeted the Houston County Hospital District (HCHD) Board of Directors as they opened their scheduled meeting on Tuesday, July 25.

Many of those in attendance were hoping to receive an update on the status of the former Timberlands Healthcare facility, the rural health clinic and to learn the progress of securing another healthcare provider to administer the hospital. 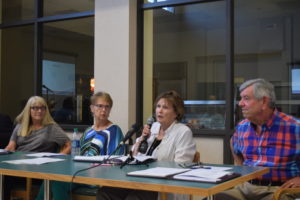 Following the reading of the previous meetings’ minutes and the approval of the HCHD financial report, Board President Deborah Porth Blackwell addressed the overflow audience.

“First of all, I’m going to start by talking about a few of the rules that have come into play. The Texas Administrative rules require that a change of ownership application must be submitted within 10 days of a facility’s closure. As you know, Timberlands gave us eight days’ notice,” Blackwell said.

Because of this, on July 18, a meeting was arranged for Blackwell, HCHD board member Dr. Bob Grier, and former U.S. Congressman Jim Turner to meet with State Rep. Trent Ashby and officials from the Texas Department of Health and Human Services “… to request a waiver on that 10 day requirement.”

“Two days later,” Blackwell continued, “the HCHD received a letter from John Hellerstedt, M.D., the Commissioner of the Department of Texas State Health Services, stating their intent to grant a waiver of the 10 day requirement for change of ownership, if a new operator can be located and submits a proper application for change of ownership and an application for waiver by Sept. 30, 2017.”

Blackwell informed the crowd the process was amazing and ended with a positive result. However, she cautioned the biggest challenges to re-establish healthcare in Houston County were still yet to be faced.

“This gives the HCHD and our community the hope of re-opening our hospital. I want to repeat, it’s only a hope. The HCHD still needs to find a partner and the financial resources to move forward in 60 days, but this is good news,” she said.

Once Schmidly’s presentation and the discussion which followed concluded – and as was first reported in the Thursday, July 27 edition of The Messenger – a motion was made, seconded and unanimously approved to allow the HCHD Finance Committee to enter into lease negotiations with CHRISTUS Trinity Mother Frances Health System with the goal of re-opening the rural health clinic.

Before the floor was opened to p 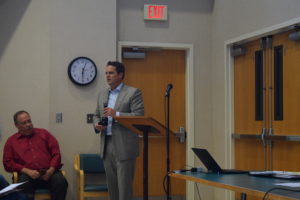 ublic comments, board member Barbara Crowson commented on a possible timeframe for the re-opening.

“No one has given a timeline, but we are talking about possibly within 15 days or so,” Crowson said.

Prior to the discussion concerning the rural health clinic, an agenda item pertaining to independent contractor agreements was brought forward.

“With the board’s approval, I would recommend we enter into an independent contractor agreement with Jeff Perry – the former CEO of Timberlands Healthcare – to aid with the administration of hospital business and with Glenn Lehman for the facilities management,” Blackwell said.

A motion was made and approved to enter into the contracts.

Blackwell next initiated a board discussion concerning the custodianship of medical records.

“We have a choice to allow Timberlands to maintain the custodianship of medical records or to take back that responsibility. This will require a secure storage site and a person to retrieve the patient records when requested,” she explained.

“With the hope of re-opening the hospital, I recommend that we notify Timberlands that we want to be responsible for the custodianship of the medical records,” Blackwell said.

Perry, who was in attendance, informed the board a secure facility for the records was currently on site at the hospital facility. As he started to continue, an audience member questioned why the HCHD would enter into a contract with the former Timberlands CEO. 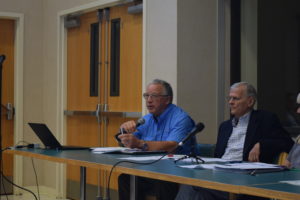 Following a few more minutes of discussion, the board voted unanimously to assume custodianship of the records.

After the vote was taken, the issue of indigent care was addressed by Blackwell.

“The Texas Health and Safety Code defines one of the responsibilities of hospital districts as providing healthcare for to eligible residents who are considered indigent. This is probably one of the most important issues a district has to take care of. At this time, we don’t have any ability to take care of our indigent residents,” she said.

“I want to assure you we will be working to establish some kind of application procedure to provide healthcare to eligible residents who reside in the hospital district service area and met the minimum resource income limits,” Blackwell explained.

As the public comments portion of the meeting got underway, several audience members praised the HCHD for their efforts in the attempt to find a new healthcare service provider along with the work done by Perry while he served as the Timberlands CEO.

Not all the comments were positive, however. One audience member made an incoherent analogy to the Jonestown Massacre of 1978 while another audience member called for the resignation of all board members who were serving when Little River Healthcare (LRH) was brought in. LRH was the parent company of Timberlands.

A question was also asked about the possibility of suing LRH.

“On the advice of our attorneys, we have decided not to sue LRH, at this time. We are hoping that they will be able to negotiate with all of the vendors they have not paid, without having to force them into bankruptcy,” Blackwell replied.

An inquiry was made about any future plans the HCHD might have.

“Remember,” Blackwell replied, “we are less than a month into this. We just found out last week we have the ability – in the next 60 days – to come up with a plan. All I can say is we are going to work our hardest to first get some emergency services (an emergency room) back in our community and then a hospital. It will be a challenge.”

Board member Dr. Bob Grier added it was a continuing struggle.

“At this point, we can’t engage an emergency room or hospital at this time. We have 60 days and we 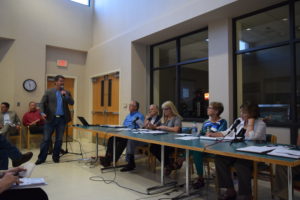 are going to use them. Please understand what we are dealing with. CHRISTUS has come to us with a plan for a clinic and by golly, we are going to work that plan. If we can work a plan where we can get an emergency room or other facilities in those 60 days, we are going to do that,” he said.

A follow up question was directed to the board about any ongoing hospital negotiations.

“There are no negotiations at this time. We are still talking with people,” Blackwell said.

Towards the end of the public comments, the question was asked if the community could afford a hospital.

Grier responded and said no, not in the previous operational state.

“It will have to be smaller and leaner. You might think of it as almost an urgent care facility, although the laboratory and imaging services we would keep. The discussion we have had among the board members and those providers who have come to us has been a full-fledged, great big hospital is not going to happen. It will be a much scaled down enterprise, if we can get there,” Grier said.

Board member Barbara Crowson added “… we are not taking baby steps, but small steps to ensure we can bring as much viable healthcare to our community as we possibly can, within the resources we have available to us and what we can approve.”