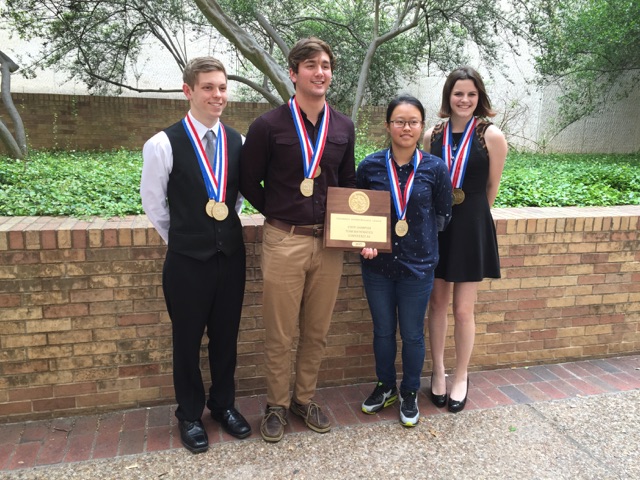 LATEXO – There is a dynasty in progress in Houston County. It doesn’t involve high school athletic competition, but it does involve an area high school and is highly competitive. And, it’s probably not where you might expect it.

You see, the Latexo High School math team captured its sixth straight state title in mathematics earlier this year at the Class 2A level. Let al
l of that sink in for just a moment.

Think of it this way, Highland Park High School in Dallas is one of the more affluent, well-respected high schools across the state and the nation and yes, HPHS did win the Class 5A mathematics completion.

Leading the Tigers’ math team is Audrey Cravens who commented the UIL state championship wasn’t the only title the team has under its belt this year for six consecutive years.

“We won the TMSCA, the Texas Math and Science Coaches Association, competition in March. It’s done with a group of math, science, calculator and number sense folks who usually compete at the state level. It’s in San Antonio and we won it for the sixth
straight year and then we won the UIL competition, in Austin, for the sixth consecutive year,” she said.

Having won the state title six years in a row means at least once, there was a 100 percent turnover. Asked how she was able to keep the math program competing at the highest levels, Cravens said it takes a lot of hard work and dedication.

“It takes many, many hours of work,” she explained. “It helps that we have won before because then the kids will listen to what I have to say. They know that it’s possible to win and they know we are on target to win. It makes them believe we can win.”

Sophomore Camryn Cr aven said this is her second year to be on the team.

“I joined the team last year and it was four to five hours a day of work because I had to get up to the expected score to compete for state,” she said.

When asked what led to her interest in competing for a spot on the math team, Craven said she was better academically than athletically.

“At the same time, Mrs. Cravens picks out the students she thinks will be good at math and says, ‘You’re either going to be on my math team or you can get out of my class,’” she laughed. “I was branded pretty early. When I got into high school, I thought it would be pretty cool to be successful in this.”

Junior Sony Townsend was asked since he now has three state championships to his name, did he plan to make it four?

“Oh, definitely,” he said without hesitation. “This is always what I’ve been good at. I’m terrible in English and other subjects and this is probably going to be what I do in college. All this math I’ve been doing will definitely help me in college.”

Townsend is also a member of the Tigers basketball and track teams and was asked how he was able to strike a balance between the court/track and the classroom competition.

“It was tough. The coaches would compete to see who could have the most hours, but they finally came to an agreement. I would usually go to basketball practice right after school and then go to math practice when that was done,” he said.

Kase Miller, a sophomore, serves as the alternate for the team and recalls how he got involved with the math team.

“I didn’t even know who she (Cravens) was. She walked up to me and said she heard I did well on the math part of the STAAR test. She asked me if I wanted to try and did UIL math and I didn’t know what to say so I said sure and I’ve stuck with it since then.”

The newest team member is Phoebe Zheng, a junior exchange student from China.

Zheng said she enjoyed math and felt she was really good at it.

“I will say, we don’t just let people come up and say, ‘I want to be on the math team.’ They get picked out and singled out. It is a really prestigious thing. We know Phoebe was in a high calculus class when she got here, so that interested me,” Cravens said.

“One day,” she continued, “we were sitting together working on a problem, out loud, that we hadn’t been able to solve. Phoebe told us the answer to it. We said we wanted to try her out. I explained what the UIL was and she said she wanted to try out for it. Originally, we thought she was only going to be able to compete with us at the TMSCA, but I called the UIL and they said she could compete with us.”

“I’m a senior this year so this is it for me. It was definitely sentimental. I remember doing this as a freshman and a sophomore. My sister was on the team and when she left, it fell on me to lead us to winning state. Having won and being a part of that was very satisfying,” he said.

Not only was Rothrock part of the state championship team, he was also the high scoring individual with a score of 310. The second place score was 252.

“Our whole team scored lower than we did at regional. I’m glad we won, but I was disappointed in our scores. We really can score higher than that,” Cravens said.

The team, as a whole, scored a combined 780 (the top three scores). Rothrock scored a 310 to finish first individually, Craven scored a 240 for third place, Townsend scored a 230 for fourth and Zheng scored a 212 for seventh. Second place went to John Michael Fuhrman from Lindsay High School.

The math teacher explained Zheng had a bad test day and had actually scored a 270 at the regional competition.

As six time state champions, the team was asked if they felt they brought an air of intimidation with them when they walked into a competitive environment.

“More so now than in the past,” Rothrock said. “Our name is recognizable to other schools from 2A to 6A.”