CROCKETT – A Crockett man – arrested for the robbery of the SNS Express convenience store in November 2016 – accepted a plea bargain offered by the Houston County District Attorney’s Office in the 349th District Court on Tuesday, April 4.

Andrew Wayne Green, 30, pleaded guilty to a count of second degree felony robbery in exchange for eight years of incarceration in the Texas Department of Criminal Justice Institutional Division.

Green was caught on the convenience store’s video surveillance after he entered the business at approximately 3:30 p.m. on the afternoon of Saturday, Nov. 26. The video showed Green went to the beverage cooler, selected a Smirnoff beverage and walked to the counter.

According to a statement from Lt. Clayton Smith, with the Crockett Police Department, when Green arrived at the cash register area he handed the clerk a handwritten note that read, “I have a gun! Put all the money in a bag or you will be shot. This is not a joke!”

Smith stated the clerk complied with the note and gave Green the money. The robber then exited the store and entered a light-colored gray car described as possibly being a Nissan Altima. 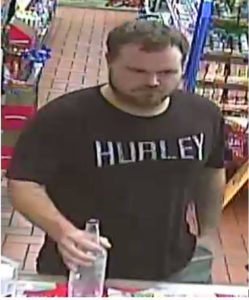 Once the robbery was reported, CPD officers were dispatched to the store’s location. After reviewing the surveillance video, the law enforcement agency released the suspect’s photo on the social media website Facebook and asked for the public’s assistance in identifying the perpetrator.

The CPD Facebook page indicated the clerk was able obtain a partial license plate number which was provided to law enforcement officials during their investigation.

“The Crockett Police Department, with help from local citizens, the media and other law enforcement agencies, was able to identify the suspect as 30-year-old Andrew Wayne Green from Crockett,” Smith stated in the aftermath of the robbery.

As the investigation unfolded, a phone call was received by the Crocket Police Department – at approximately 1 a.m. on Sunday, Nov. 27 – which indicated Green was observed in the 200 block of West Houston Avenue.

“(The) Crockett Police Department and Houston County Deputies arrived at that residence and found Andrew Wayne Green standing in the front yard. Green was taken into custody without incident and was transported to the Houston County Jail where he was booked and charged with robbery,” Smith stated.

At the time of his arrest, law enforcement officials discovered Green had attempted to alter his appearance by shaving his head and his beard. A gray Nissan Sentra was also discovered at the West Houston Avenue location which matched the vehicle seen on the surveillance video.

Green was indicted on the robbery charge by a Houston County grand jury in January of this year.

So, You Think You Had a Bad Week?
Lockhart Locked Up on Five Felony Charges
Denson Investigated for Capital Murder