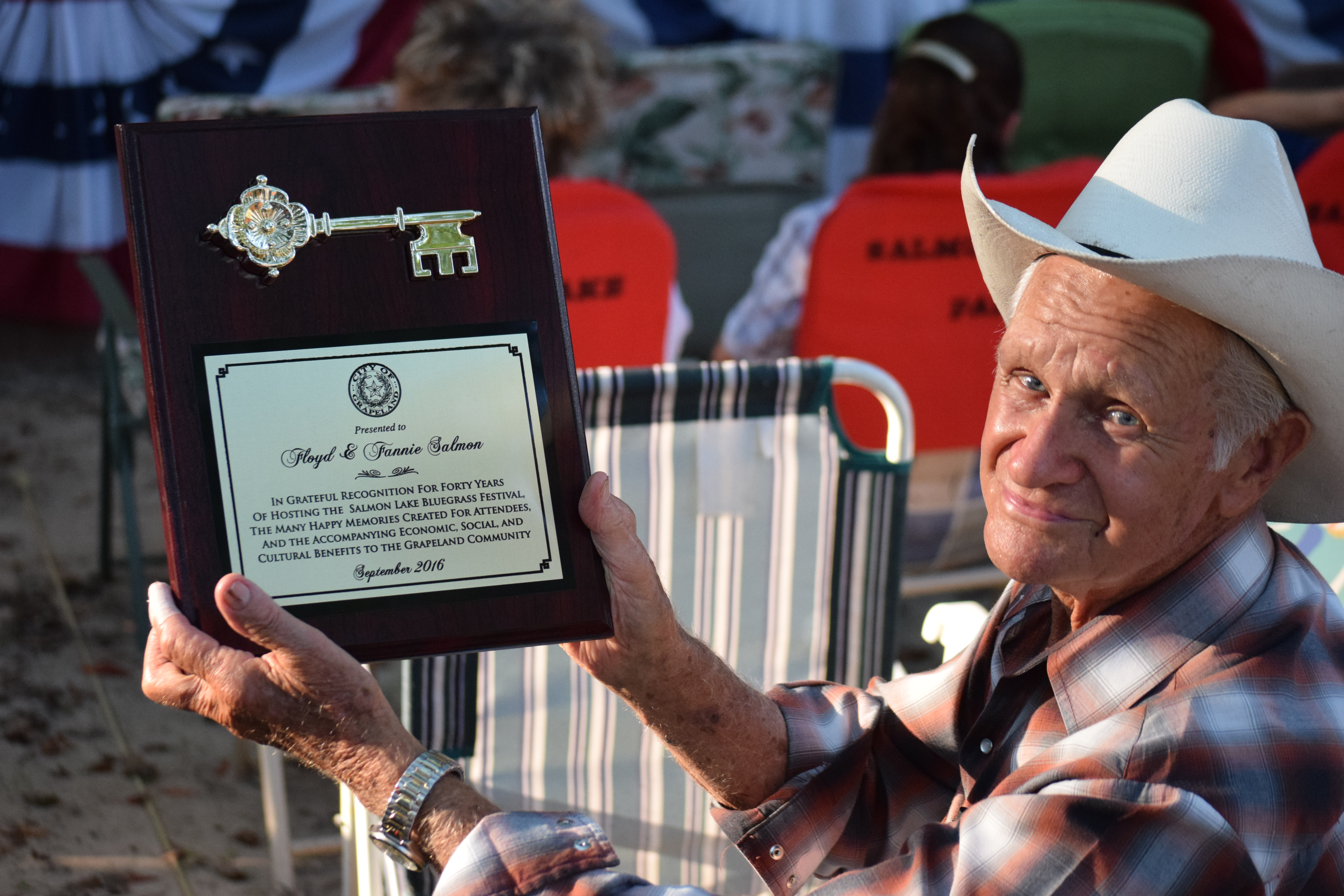 The activities at Salmon Lake Park began at 5:45 p.m. with the presentation of colors by the Vietnam Veterans of America Chapter #991 who led the audience in the Pledge of Allegiance.

Festival Manager Collee Biller-Littlefield followed the Honor Guard and welcomed the festival goers to the Queen City of the Sand Flats. After a few housekeeping matters, the coordinator thanked the Grape 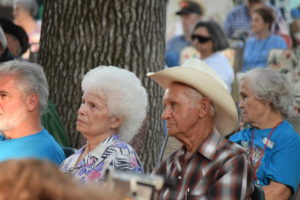 land Chamber of Commerce for their efforts in promoting the event and for providing cobbler and ice cream to the bluegrass fans gathered by the stage.

“Forty years is a long time. This 40 years may seem like just yesterday, but it really has been a lifetime where kids have grown up and your grandkids have come around,” she said.

Specifically speaking to Fannie and Floyd Salmon in the second row, she commented, “I don’t know how you did it, but you did.”

As she continued, Biller-Littlefield asked various individuals in the crowd how many years they had visited Grapeland at the start of September to hear the sounds of bluegrass whispering through the pine trees. Hands began to spring up as she ticked off the benchmark anniversaries.

Gesturing towards the buildings dotting the Salmon Lake Park landscape, she added, “If these buildings could talk, it wouldn’t be about when they were young and new and just beginning their lives. It would be about their rebirth once Floyd Salmon brought them into Salmon Lake Park. It would be about how carefully Floyd put them back together with the original nails and wood and how Fannie’s good eyes and tender touch re-outfitted them for sleeping and cooking and the occasional pickin’ and grinnin.’ It would be about all the kids running around, both outside and inside, and how they’re now grown. It would be about all of the friendships that were formed and how they have lasted several decades. These walls would say, ‘Remember when he was just learning how to play the fiddle? Now, he and his grandson are performing on stage.’ They would recall the countless photographs with the lake in the background and the families in the forefront.” 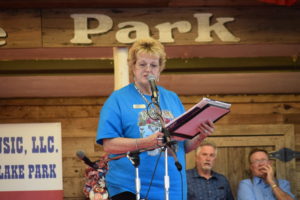 d also talk about things,” Biller Littlefield said. “It would say, ‘I wonder how many countless young children have learned how to swim and fish here and how many young couples have held hands out here for the first time as they walked around my banks? There is no telling how many lives have been touched and changed by these stacks of wood and steel and I would think changed for the better. I would also think over these 40 years, all of us who still remain – and the countless others who have gone before us – have a story to tell about when we were here in Salmon Lake Park.”

More and more bluegrass fans began to trickle towards the stage as Biller-Littlefield began to present gifts to the Salmons. She said a flag pole would be installed in the Salmon’s front yard at Fannie’s request and also revealed a song had been written in the couple’s honor and would be performed later in the evening.

The last thing the festival manager presented to the Salmons was a proclamation from State Sen. Robert Nichols which commended them for their “… hard work and dedication to bluegrass music and extends to them best wishes for a memorable 40th Labor Day Bluegrass Music Festival. And be it further proclaimed, that a copy of this proclamation be prepared for this distinguished couple as an expression of high regard from the State of Texas Senate.”

Grapeland Mayor Balis Dailey followed Biller-Littlefield to the stage and said, “I want you to know this afternoon we are humbled in expressing our gratitude to Mr. Floyd and Mrs. Fannie Salmon. Today, we wish to show our appreciation and our gratitude. Appreciation is a wonderful thing. It makes what is excellent in others belong to us as well. I hope that all of you here today share in that belonging in this appreciation we have for them 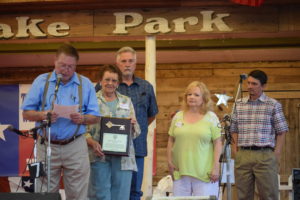 After a few brief remarks, the mayor said, “It is my privilege to represent our city, along with my fellow councilmembers, in presenting you a token of our appreciation representing a key to the city and a key to the hearts of our community. It is our wish that your faces will always be towards the sunshine and the shadows will fall behind you. We want to thank you from the bottom of our hearts in the City of Grapeland, Texas.”

After Mayor Dailey concluded, the Texas HoneyBees took the stage and launched into the first song of the festival. To no one’s surprise, it was the song referenced by Biller-Littlefield which was written in honor of the Salmons. Set to the theme from “The Beverly Hillbillies,” the song started with the lyrics, “Come and listen to a story ‘bout Salmon Lake Park where Floyd and Fannie Salmon have truly made their mark. It’s down in Grapeland, Texas. It’s quite a sight to see so pack up your camping gear and bring the family. East Texas, that is – cattle ranchers and tall trees…”

From all of us at The Messenger, we wish to extend our congratulations to Fannie and Floyd Salmon on the 40th Anniversary of the Bluegrass Festival and to say thank you for being such an integral part to the identity of Grapeland.