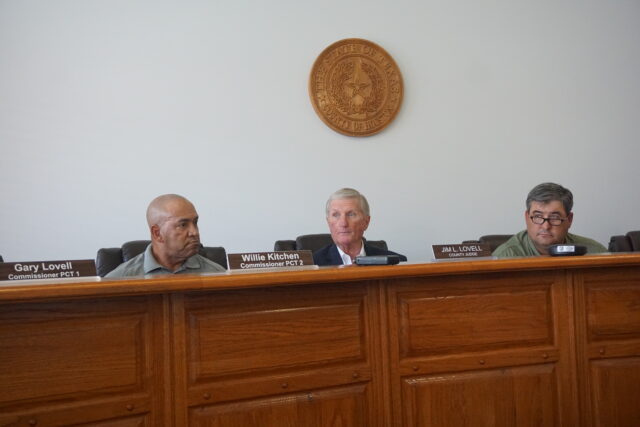 HOUSTON COUNTY –    Late last week notice was given for a special meeting to be held by the Houston County Commissioners Court for Monday, Aug.1. The meeting agenda had essentially one item. The court would discuss and submit a written request to the director of the Texas A&M Prairie View Cooperative Extension Program for the removal and replacement of the current Extension Agent Corey Hicks.

In the Monday meeting, supporters and family of Hicks were present as the meeting opened with a prayer and the pledges of allegiance to the U.S. and Texas flags.

County Judge Jim Lovell acknowledged there were members of the public who had requested to speak. First, the judge called on Dr. Clarence Bunch, Program Leader for the Texas A&M Cooperative Extension Program, who joined the meeting by video conference.

“In lieu of recent developments, Dr. Bunch, would you please explain to us what Prairie View’s intentions are?” Lovell asked.

Dr. Bunch asked the court to table their intention to write a letter seeking Hicks’ removal. Bunch told the group there is an opening in another county and Hicks could be transferred there.

Judge Lovell asked if this transfer was due to a recording the judge sent Dr. Bunch. Bunch confirmed it was due to this recording.

“I spoke with Corey outside just a minute ago,” Judge Lovell told the attendees. “Corey has agreed to a transfer.”

The court then voted unanimously to table the motion, given that the transfer was apparently agreed to by both Hicks and Dr. Bunch.

Judge Lovell called on Joe Hicks who had signed up to speak on behalf of his son, Corey.

“I’m not happy with this at all,” Hicks Sr. said. “I am not happy with the way this is being done. Corey has been right here in Crockett Texas his whole life. He has been on the job 10 years and never had a problem. You all know what happened. Corey has done everything he can – from the police department to the district attorney. Nothing has been done to help Corey.”

At this point in the meeting, it was still unclear what had caused this series of events. All that was known was that Judge Lovell provided a video to Prairie View and that the court was requesting Hicks to be transferred.

After the meeting Judge Lovell spoke to the Messenger and explained what had led to the special meeting.

“There was a video that showed Hicks in a discussion with a lady at a business here in Crockett,” Lovell explained. “Some language was used that was very unprofessional for a public servant. While Corey is not a county employee, he serves people in the county and he represents the county.”

With the court tabling the motion to request a transfer for Hicks, Judge Lovell said as far as he was concerned that was the end of the matter.

Precint 2 Commissioner Willie Kitchen told the Messenger he tried to remain neutral until all the facts were gathered. Kitchen said he was sorry that Hicks, a lifetime resident of Houston County would be moving away. Kitchen said he felt this was, however, the best decision for both Hicks and Houston County.

The video Judge Lovell sent to Dr. Bunch is still yet to be seen publicly. At this time it is still unclear with whom Hicks was allegedly speaking and the circumstances regarding the incident.

The Messenger reached out to both Corey Hicks and Dr. Bunch for further comment. As of press time there was no response.

***UPDATE – Dr. Bunch contacted the Messenger after the original story went to print in order to clarify that he could not comment until the matter was settled but would give an update in the near future.

COVID-19 in Area Schools
TAKE A MINUTE AND LOOK UP THIS AUGUST
Update on Spread of Coronavirus – Oct. 2