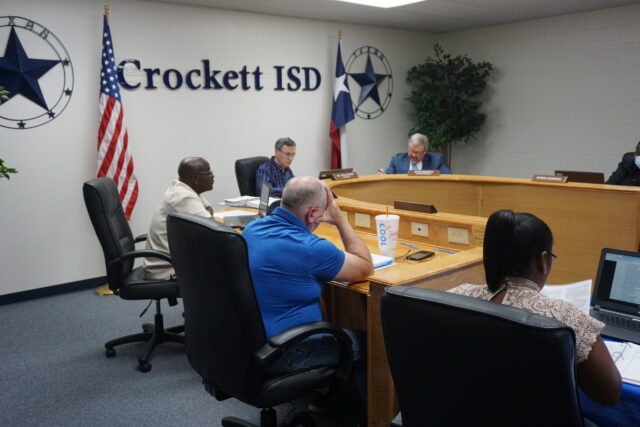 CROCKETT  – The Crockett Independent School District held its monthly stated meeting Monday July 25. All board members were present along with Superintendent John Emerich and members of the public.

After pledges of allegiance to the U.S. and Texas flags, board member Ansel Bradshaw led the group in prayer. Members of the public were then asked to speak and there were comments about the purchase of a used forklift by the district.

As part of approving the consent agenda, school Superintendent Emerich proposed a change to the district’s dress code.

“Tattoos, whether temporary or permanent, must be appropriate for the school setting, and not otherwise offensive or disruptive to the school or work environment,” Emerich explained. “Tattoos visible on the neck or face are prohibited. Any tattoo that does not meet these standards must be covered.”

Board members Karen Norman and TieAsia Tucker questioned the changes regarding holes in pants. Norman commented that a child that cannot buy new pants may face a level one disciplinary offense. Emerich pointed out that all of the dress code violations are level one offenses.

Asked about the allowed holes in pants, Emerich acknowledged that some children cannot afford new pants and sometimes these pants will develop holes. He stated only holes below the knee will be allowed, since holes in pants above the knee could be provocative.

Emerich proposed the board continue the agreement with law enforcement agencies for the past two years helping to insure that there is an officer present at both home and away varsity football games. The agreement also provides for an officer to be present at all local varsity high school games. The district will still try to hire off duty officers for these events. Emerich was asked by the board to include a clause whereby the officer would stay at the games until at least half an hour after each game ends.

Emerich told the board about a small grant offered to the district from the Texas Workforce Commission (TWC). The TWC approved the district’s purchase of a used forklift in order to certify students as qualified forklift operators. Previously few students wanted to make the trip to Angelina College to receive their qualifications. This forklift would allow the students to become certified at the school. The board members discussed and agreed that forklifts are a big part of local economic operations.

Several district teachers participated in the “externship” program, allowing teachers to work in businesses in the area to see the real conditions and educational needs students will need to fill similar positions.

“Our welding teacher actually went up to Vulcraft,” Emerich explained. “He thought he knew exactly what they were doing there; welding. He came back very surprised by the number and variety of jobs they have up there. The programming jobs, forklifts; all the different things for which students can get skills here. Now that we know about them, we can maybe be able to help them get hired at Vulcraft or other places once they finish school.”

Emerich congratulated the winners and all the students who traveled and participated in the FFA conference in Fort Worth, as reported in the Messenger.

Emerich reported on door safety at the various campuses, explaining that many of the door audits must be done every week and sent to the Texas Education Agency. He said the district is ready. The doors that would have failed the audit were recently replaced or repaired before the new state policies were announced.

The district is focusing heavily on the School Marshal Plan. This allows schools to give educators or employees law enforcement capabilities and responsibilities.

“They are more well trained and have to take a state licensing exam to be qualified to hold that title,” Emerich said. He explained meetings with local law enforcement are ongoing. “We have a great relationship both with our sheriff’s department and our Crockett police department.”

Emerich then called on Will Johnson, Messenger reporter to stand and come to the front.

“Will has been a reporter for the messenger and has covered Crockett ISD for 12 years,” Emerich told attendees. “We wanted to thank Will. He has been a pleasure to work with. He has aways been fair with us.”

Emerich and board president Dr. John Garner presented Johnson with a plaque to thank him for covering the school district over the years.

Emerich said the state will not release the official accountability ratings until Aug. 15. He told the board that using all of the metrics related to the ratings, he expected the district to have no schools with a D or F rating. Improvements were made in reading and math, which Emerich attributed to the TAP program. The TAP or Teacher and Student Advancement Program helps schools retain good teachers through training and pay incentives.

Emerich told the board they are still working with the state to finalize the school property tax rate. The proposed rate which has been mandated by the state would be 1.124 cents, about one and one half cents lower than the current rate. The State of Texas is funding the difference between the current rate and the proposed rate, but it is unknown if and when this extra funding will end. This would cause local school districts to have to raise the rates in the future.

Board member Stephen Tuggle explained that even though the tax rates have gone down, property owners have continued to pay more. Tuggle said this was due to increasing property evaluations.

The board further voted to sell some old school busses made in the late 1990’s that do not have air conditioning and that now cost the school too much money in maintenance costs.

The board also voted to accept a $750 donation from the United Methodist Army who used some Crockett school facilities to sleep when they came in town recently to help renovate properties damages by the tornado earlier this year.