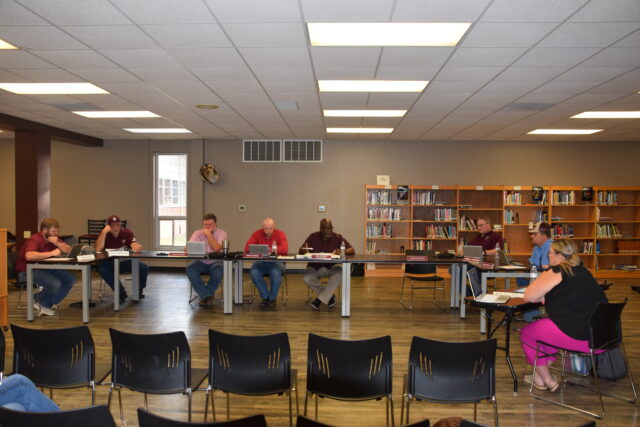 GRAPELAND – The Grapeland Independent School District Board of Trustees approved an across-the- board, five percent pay raise for employees during a meeting held on Monday, July 18.

Following a second executive session, the board reopened the public portion of the meeting to approve the pay hike.

Grapeland ISD Superintendent Don Jackson spoke about the matter shortly after the board adjourned.

“We know the difficulty the education profession is going through right now,” Jackson continued. “We know there is definitely a teacher shortage. We also know the economy is down. Gas prices and grocery prices have gone up. The board wanted to show the deep appreciation it has for our staff. This is not just for teachers. There is a five percent, across-the-board raise for all of our staff including bus drivers, teacher’s assistants, administrative assistants, administrators – all staff members. I believe we have around 110. So, all 110 are getting a five percent raise.”

He further explained in the past, the GISD Board had given stipends – which may still continue – but the stipends were not creditable compensation for the Teacher Retirement System (TRS).

“What the board did tonight will increase the average (salary) past the (pay scale) step they usually get. They will get their step increases along with a five percent raise. It should be pretty significant for all staff members. We ARE NOT taking away the step raise. It is still there, plus an additional five percent,” Jackson said.

Prior to the payroll discussion, Jackson reported the next proposed board meeting is Aug. 15 at 7 pm to accommodate the district-wide Meet the Teacher event, scheduled between 5:30 pm and 7 pm.

The next area the superintendent brought forward pertained to safety concerns for the district in the wake of the Uvalde tragedy.

“I have been to a pair of safety meetings and that is really something that is a big concern for us, along with every school in the nation. TEA (Texas Education Agency) has come out with some mandates for us that will be addressed,” he said.

“Like I said, I have met with the Houston County Sheriff’s Office, Grapeland Police and the Crockett Police. We have now met twice to talk about being a team when it comes to responding to a possible issue. We have not yet hired our SRO (School Resource Officer) but we have three applicants for that position. That position will be filled before school starts. That will be someone else who can coordinate safety,” Jackson said.

As he continued, Jackson said one of the mandates issued by the TEA was a summer audit where law enforcement joins district administrators to discuss areas of concern. The district is also required to conduct an exterior door audit where every exterior door is checked.

“There will be checks where every door is inspected once a week but they will be checked every day. There will be a Safety and Security Committee which will need to meet with law enforcement before Sept. 9. There are a whole lot of things we are going to do to hopefully prevent and respond to anything negative that might happen,” he said.

Jackson went on to say, “I’m looking forward to the help of our SRO. They will help us with our Guardian Plan, help us get some good practice in and make sure we are ready to respond to any type of situation like that. Safety is inconvenient but we won’t mind being inconvenienced. You will hear some stories about people standing at doors a little longer because we don’t know who they are. We are going to train our secretaries to do that. Students will have locked doors, all day long in their classes. They will go into the classroom and the door will lock behind them. It’s things like that that we can do to help make us safer. We also have some fencing going up at the elementary school.”