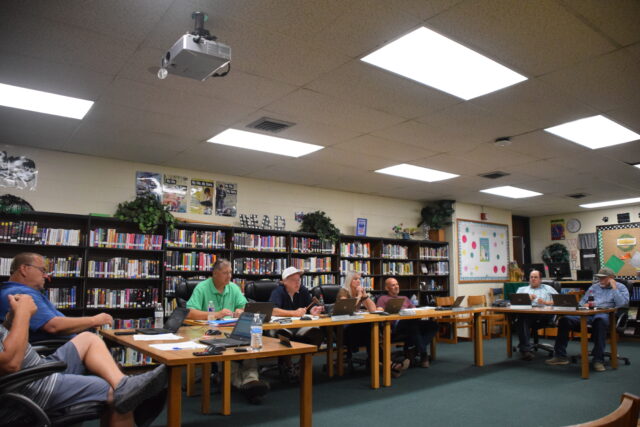 LATEXO – In the aftermath of the tragedy in Uvalde, a discussion on school security matters highlighted the Latexo Independent School District Board of Trustees meeting held on Thursday, July 14.

High School Principal Mack Dugat opened the discussion and said “… the TEA has sent us a ton of stuff we have to go through. One of the things that is changing is we will have to do a door sweep weekly to make sure all the doors are locked. There will be a lot more safety stuff going on and I can’t tell you everything now. When I opened it up, (TEA directives) it is a lot. It looks like a lot, but I think a good bit of that stuff we already do.”

Board Secretary Jeffrey Catoe expressed his concerns about the propping open of doors and said he would like to have some type of alarm tied in with an open door. He also mentioned he had observed a rock by many of the doors which was used to hold them open.

As the discussion continued, Catoe asked, “Since Uvalde, is the state putting in any money for all the enhancements they want us to make? I’m going to say it until I pass out. There are two campuses here and you need security on both campuses that stays in the building. That way they can defend and protect those kids if there is a shooter coming into the building.”

LISD Superintendent Michael Woodard responded and said the district has now posted a job opening for a police chief at Latexo ISD.

“It would be great to have at least two. Once we get started, maybe we can bring somebody else on board,” he said.

“As far as funding, the state said they were going to throw some money our way. We don’t know yet. They are always kind of slow but we’re going to get this in place. If we get the money refunded, so be it. If not, we’re going to dig deep and find the money. We can’t wait. God forbid something happens here. That is my biggest fear. The doors are things we will look at. There will be a whole lot of different training and active shooter training. We’ll get the teachers on board first and even the kids. For 40 years, we’ve been doing fire drills but when is the last time a school burned down during the day. Uvalde has shined a light on everything. We have to change the way we do things now. It’s sad, but also smart,” Woodard said.

Before the meeting was officially opened, Latexo ISD Counselor Sandy Simpson provided the board with a presentation on the Every Student Succeeds Act (ESSA).

“This is a required thing that we go over the money we get for Title I. We are not really making any significant changes from last year. It pretty much goes to salaries for our para professionals to help reduce the teacher/student ratios. We buy all of our technology programs out of Title I money. All of our online intervention programs come out of there. We have a required homeless reservation so if we have any homeless students, we can help them out there,” Simpson said.

She added the program would fund a little more at the elementary school this year for parents to achieve “… meaningful ways to engage with the school beyond father-daughter dances. They wanted more academic things they could get involved with so we put in some money so we could nacho cheese for ‘Nachos and Numbers Night’ or an ice cream social ‘Technology Night.’ We can’t provide a whole meal but we can have refreshments to incentivize people to come.”

Simpson explained the ESSA grant is an every-year grant to help increase student achievement for all students but especially those disadvantaged and high-need students.

When the meeting resumed in the Latexo High Library, Elementary Principal Kathryn Jenkines. She reported each grade level showed growth from the previous year on their STAAR scores.

“In terms of where we are when compared to the state averages, we are above in several areas, right at the sate averages in others and just a few below. We do have a plan in place going forward into next year to make those adjustments. Each grade level grew,” Jenkines said.