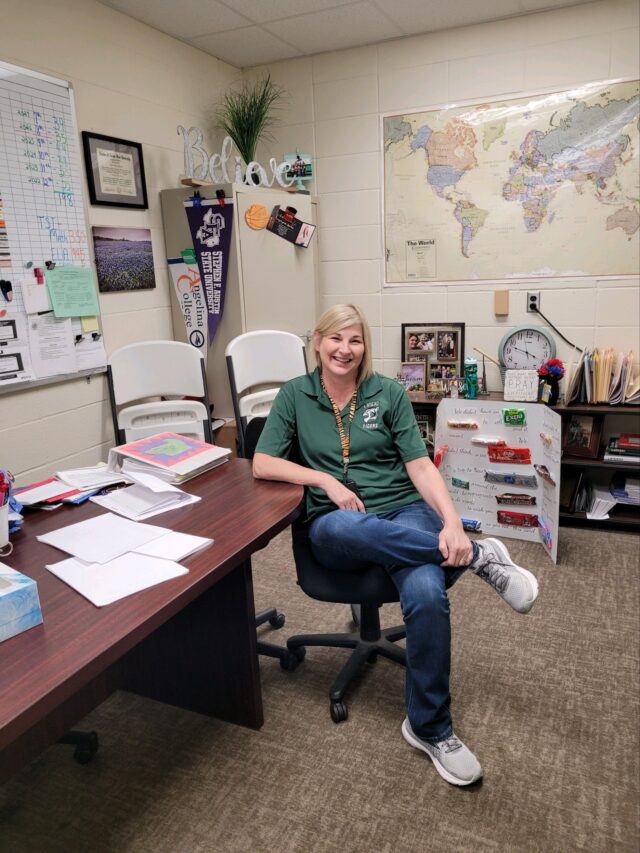 Watson Calls it a Day after 34 Years

LATEXO – In 1988, Ronald Reagan was President of the US, Margaret Thatcher was Prime Minister of the UK and Mikhail Gorbachev was the General Secretary of the USSR. Reba and King George topped the country charts, Guns n Roses was just starting to get noticed and Public Enemy, along with NWA, ruled the world of hip-hop. The Nebraska Cornhuskers were also pretty good.

Fast forward 34 years. All the aforementioned leaders and musicians have reached legendary status. And in some circles, so has the LHS Principal. The Huskers, on the other hand, have kinda fallen off the face of the college football landscape.

They say all good things must come to an end and earlier this school year, Watson decided to file her retirement papers.

On Thursday of last week, she took the time out her busy end-of-school schedule to reflect back on her career and what she has planned for the future.

“I think you have an intuitive sense when you know it’s time to move on. Personally, I would say it’s a good time for me to leave the school because we have really good people in control of all the different, essential areas. The staff and the students will be well taken care of,” she said.

As to what her plans for the future are, Watson laughed and said her name would no longer be “the Wats” but would now be KK.

“I’m going to clean my house and help my husband (Joe) garden. I also have more goals I have set for myself and things I want to accomplish. I would like to work a little more closely with my church family and to be a better family member to my immediate family. You know, like a wife, a mother and a grandmother,” she explained.

She added she would also like to travel and already has started looking at a couple of beaches to visit.

“If the situation around the world gets better, I would also like to go to several places in Europe. That would be fantastic. That’s a far-off dream. I’ve never been,” Watson said.

When questioned as to why she first got into education, the soon-to-be former educator said originally, she had wanted to be a nurse, but realized she didn’t like needles or blood.

“I always had a passion for English and History. I always loved those things in school, so I said, ‘Hey, I’ll get a degree in those.’ Luckily, I found I really loved students when I started as a student teacher for Carrie Trahan at Grapeland ISD. (Current Latexo ISD Board President) Kelly Nicol was in that class,” she said.

After completing her student teaching, Watson said her first official teaching job was in Lovelady where she taught Wendy (Broxson) Tullos, now the superintendent at Lovelady ISD.

“I taught seventh and eight grade English, along with Texas History. Then, I moved to Latexo. (Coach) Don Tullos told me not to go there because it was a terrible school. I had about 26 students per class and I taught seventh through 12th grade. I had a file cabinet for each set of lessons for the entire year. I

learned how to multitask and teach a lot of different things. It challenged me because I like to think a lot, and to me, it gets very stale teaching the same thing, all day long. So, I loved it! A lot of people can’t handle a lot of preps, but I thrived,” she said.

Shortly after getting started as a Latexo Tiger, her boss came to her and said she would be directing the One-Act Play.

“I wanted to do a good job at that, so I learned how to do it well. My husband was probably tired of building set pieces. I think if I had asked him to build anymore, we were going to get a divorce,” she laughed. “After 20 years of that, I found someone else to do it and devoted more of my time to UIL competitions like Current Events, Extemporaneous Speaking and Journalism. I taught AP English starting in 1999 and Dr. (Michael) Allen was one of my first students in that class. I loved the literature. I loved teaching AP and writing so, I did that,” she said.

When Latexo ISD Counselor Sarah Brenner said she was going to retire, Watson said she was asked to take her position.

While she enjoyed her time as counselor, when LHS Principal Michael Woodard was promoted to the LISD superintendent, he asked if she would like to be principal and four years ago, she said yes.

“I feel like Latexo is something I have birthed. Barbara Johnson was here before me and she was a big inspiration. She was a hard teacher, but loved kids. She also loved UIL when she was doing that. Anyway, I got into this position. I like to have my fingers in lots of pots but I have always considered myself a teacher first,” she said.

While Watson has won gold in several UIL events as a coach, she said some of her favorite memories simply involved the trip to Austin.

“Every single trip was an adventure. If I had been smart enough, I would have compiled a book and made a chapter for every single trip. Something has always happened that’s memorable,” she said.

Before the conversation concluded, Watson was asked what she would say to her colleagues.

“I feel like I’m working with two guys who are like brothers to me (Superintendent Michael Woodard and Asst. Principal Mack Dugat). I feel like they are some of the few people in education who have hardcore morals and ethics in that education/kids come first. Along with sticking to your guns, I feel like they need to continue that and I’m sure they will. The school is going to run like a well-oiled machine with all he little pegs in place. We have great teachers. I don’t feel like we have any weak teachers on our campus. I feel like the parents, in some respects, might not realize how good they have it with their kids getting their education here, compared to many districts. I feel like we are a premier school,” she said.