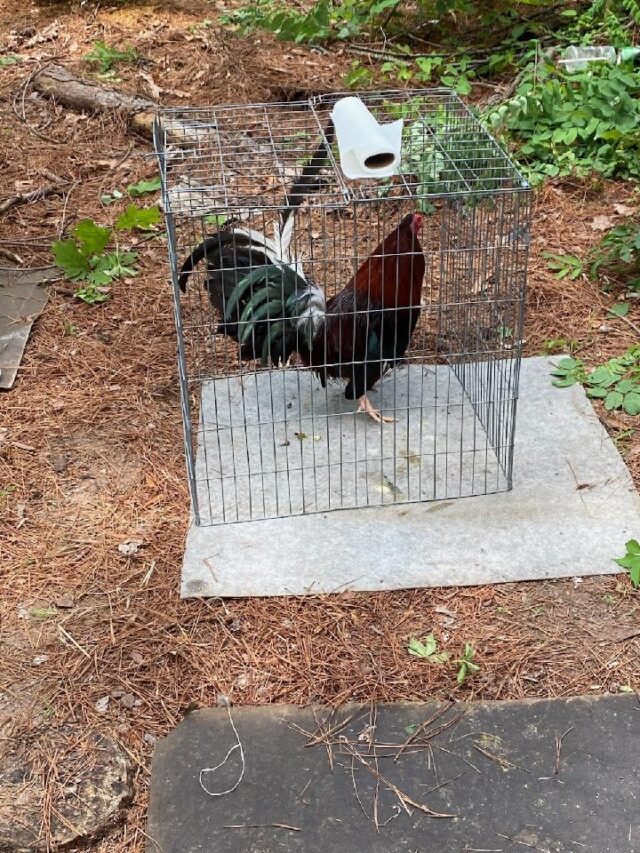 KENNARD – A cockfighting operation was broken up on Saturday, May 21 by the Alto Police Department and the Cherokee County Sheriff’s Office. Approximately 50 people were identified at the operation – on County Road 2638 outside of Alto – while 97 roosters, nine trailers and a truck were seized at the property.

On Sunday, May 22, it appears the cockfighting ring simply moved about 30 miles to the southwest as another cockfighting operation was busted outside of Kennard.

According to several affidavits of probable cause, deputies with the Houston County Sheriff’s Office were dispatched to County Road 1180 near Kennard, to help out Texas Parks and Wildlife Game Warden Zak Benge who had observed a cockfighting operation.

Deputies Mathew VanEgmond and Ryan Hutcherson arrived at the location and began speaking with several of the individuals identified by Benge as being a part of the operation. Sgt. Mike McCreight was also present at the location.

“Upon arrival, McCreight could hear yelling coming from a wooded area behind the house. McCreight observed several male subjects flee into a wooded area. As McCreight approached the back of the property, he observed what appeared to be an illegal operation of cockfighting,” an affidavit stated.

Sgt. McCreight reported he observed approximately 20 people, along with several vehicles parked around the property. The sergeant also indicated he observed the property owner, identified as Patrick Carl Wilkinson, 44 from Kennard, walking away from the cockfighting area and back towards his residence.

“McCreight observed several fighting roosters in cages and several dead roosters on the ground. He also observed what appeared to be a fighting pit. Wilkinson admitted to officers that he allowed them to fight cocks on his property. He also had $244 in his possession. Wilkinson advised that he sold beer to the participants at the fight, resulting in being a participant in the earnings of a cockfight,” an affidavit reported.

Deputy VanEgmond spoke with Andrew Flores, 20 from Greely, CO, who said he drove out to the location in a Dodge pickup but was only there to drop off some beer.

The deputy observed Flores was wearing a blue t-shirt and jeans that were covered in blood. When asked about it, Flores stated “… the truck next to his had a chicken that was bleeding and it flew into him.”

After receiving consent to search Flores’ truck, VanEgmond observed several spurs or “gaff” attached to a rooster before a fight. Flores claimed that someone had put that into his vehicle when the cops came out of the woods, the affidavit reported.

VanEgmond also spoke with Jesus Jasso, 21 from Lufkin, who claimed he was only there to watch the action. However, Jasso also had blood on his clothing and shoes, along with having a rooster tied to the back bumper of his truck.

The deputy also questioned Orlando Martinez Toledo, 48 from Nacogdoches, who admitted he had cockfighting equipment in his vehicle but was only there to watch the fighting, but had been asked to bring his equipment to the location, just in case

As the investigation unfolded, Deputy Hutcherson attempted to speak with Carlos Gonzalez Munoz, 49 from Nacogdoches, but Munoz refused. Hutcherson found the truck driven by Munoz “… and saw three cocks near his vehicle, one of which was deceased. Two more were tied to a stake in the ground.”

J. Ignacio Carrillo-Garcia, 57 from Nacogdoches, was also questioned by Hutcherson. Garcia said he was a passenger in a truck, but was found to have cockfighting gear on his person.

All 10 men listed above were arrested and transported to the Houston County Jail where they were booked into custody on charges of cockfighting, a Class A misdemeanor.

All defendants posted bond and have been released pending further legal proceedings.