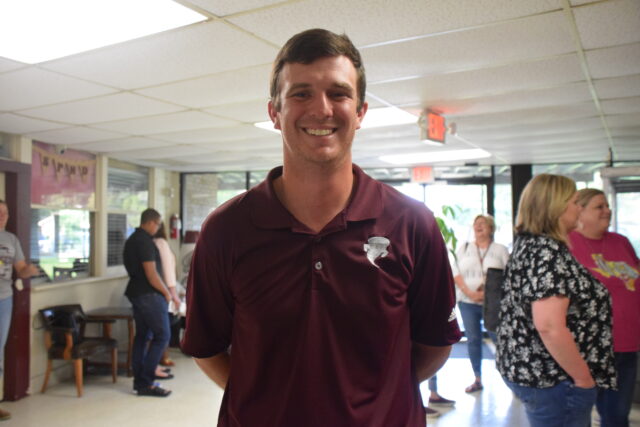 GRAPELND – During the Grapeland ISD Board of Trustees meeting held on Monday, May 16, it was announced Tyler Terry would be taking over the reigns as the Head Basketball Coach for the Sandies.

Terry, an assistant on the GHS coaching staff for the last several years, has served in a number of coaching roles for the Grapeland program including stints in football, basketball and baseball. He also helped guide the Sandies to the Class 2A State Championship game in 2021, where Grapeland fell to the Clarendon Broncos, 64-60.

Terry also serves as the Head Golf Coach, leading the Sandies to a 9th place finish at the 2022 Class 2A State Golf Tournament earlier this month.

Before being formally approved by the GISD Board, the coach sat down with The Messenger to discuss his new position.

“I found out about this a little over a week ago. After baseball season finished up, Coach Wood (AD Jordan Wood) and I had a conversation about it and found out about it for sure,” he said.

Asked how he planned to continue the winning ways of Grapeland Sandie basketball, Terry replied, “I’m just going to keep on building with what we are doing. I’m not going to go in and try to change a lot of the things we do. I just want to keep building the program the way we have.”

One of the positive things, he remarked, is that the Sandies have a lot of returning players in 2022-2023 season.

“They have been a part of these District Championship teams, so they know what is expected from them and what it takes to get it done. I’ve been a part of the program too and coached with Coach (Blake) Doughty. I think we are going to keep building on what we are doing and not change a whole lot. But we definitely want to improve in some areas of our game,” he said.

As far as what type of offense he envisions for the Sandies, Terry said, “We are going to try and work on some different stuff. I think I’m going to try and go to more of a flex style offense this year because I don’t know if we are going to have quite the ball-handlers we have had in the past. Obviously, we had BJ (Lamb) and Keizion (Ashford) a couple of years ago and those guys were phenomenal athletes.”

“Now,” he continued, “we are still going to have some good ball-handlers, but we’re not going to have the blazing speed we have had in the past. We’re going to look at getting the ball to guys coming off of screens and have more off-ball movement, versus trying to play one-on-one.”

Defensively, Terry said he hopes to stay with a man-on-man style of play.

“I’m not a huge zone type of guy. I don’t mind going to it and we will go to it if we are getting outsized in the middle, but I’ve been watching Texas Tech and Baylor play that no-middle, man style of play where they force the ball to the sidelines and trap off of that. We’re still going to play a pressing, up-tempo style. I really want these guys to be engaged defensively this year and turn up the energy on that end of the court,” he said.

Concerning what goal he has in mind for the program in the middle of May, Terry said his initial goal is to keep the District Championship streak alive, which currently stands at 14 consecutive years.

“You obviously want to get that number one seed for the playoffs and then we’ll look at Round Three. That’s a tough game. Our goal is to get ourselves to Round Three of the playoffs. I know that’s going to be a tough game. You’re either going to get (Martin’s) Mill or LaPoynor or a Frankston team that’s starting to peak. I think if we can get ourselves to that game and be there in that situation, I think that’s a successful season, in my opinion. Whatever we do from there is a bonus. I don’t want to put pressure on the kids and talk about how we are a State Championship team. I want them to take every game as if it was a one-game season. We will play that game to the best of our ability and then move on to the next one,” he said.

From all of us at The Messenger Sports, congratulations on your new position Coach Terry and best of luck in the upcoming seasons.