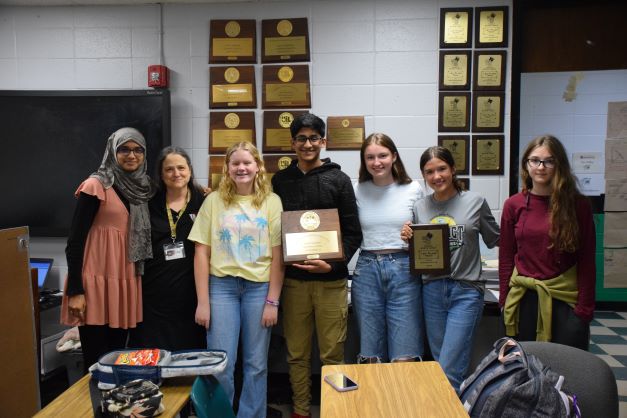 LATEXO – For eight years, Latexo High School the UIL State Mathematics competition. Then, in 2020, the COVID-19 pandemic hit the world like a sledgehammer and wiped out UIL competitions in the spring.

Last year, the UIL competitions were back, albeit with a different format. The state competition has traditionally been held in Austin, but with social distancing, last year was split into 26 hubs across the state. And Latexo won the Class 2A Mathematics event for the ninth time.

This year things seem to be returning to “normal” as the pandemic begins to slowly loosen its death grip on the world’s throat. A constant through all of this, however, has remained the competitive spirit and drive shown by the number czars in green as they hoisted their 10th consecutive (probably would have been 11) State Championship trophy in mathematics last weekend.

Winning a state championship in anything is hard, but staying on top is even harder. Now, imagine trying to do it for over a decade.

Carter Tucker was the only holdover from the 2021 Championship team.

Mohammed said he was what was called a “little” last year.

“I just sat in the front and tried to pick up on anything I could. Late in the year, she (Mrs. Cravens) focuses on her UIL ‘bigs,’ the four-man team. The littles can hope to pick up on any small amount of information. As the seniors graduated, I moved up in the ranks and fortunately this year I was competing,” he said.

Asked how she was able to continue the unprecedented success of the program, Mrs. Cravens replied, “There is overlap between the teams. Sometimes when you have a group of kids competing, none of them graduate that year. Other times, you graduate one, two, three or all four of them. It just depends on the groups. (LHS Principal Kim) Watson says its like a funnel. You just keep pouring people in. I target the eighth graders and I teach them AP and Pre-AP Algebra I. I pick out the kids that year who are potential team members. You teach them way more than an Algebra I kid learns in the whole class, not just to the potential team members. If you teach them more than most Algebra I kids learn, then when they move up to Geometry, we teach them way more than the average Geometry student learns. Eventually, you see the cream rise to the top. You see the ones who are highly motivated, which ones are highly intelligent, which ones are good at taking timed tests under pressure and which ones just stand out. You start filtering them into practices and after they are filtered into the practices, they are exposed to other topics they haven’t learned in their classes, yet.”

As to what disciplines make up the math tests given in the various competitions, one of the “littles,” Natalie Nicol, said, “There’s calculus, Pre-cal, statistics, Algebra I and II, and geometry. There are questions from pretty much anything you will learn in college.”

Now being 10-time state champions, the team was asked if they felt they brought an air of intimidation with them when they walked into a competitive environment.

“It’s the craziest feeling ever,” Mohammed laughed and said, “You sort of get this really big ego which you try and keep down, but when I walk into the room with my math sweater on, I can hear people say, ‘Great, they’re here.’ And then you just know, we’re going to dominate this test. It’s an amazing feeling, but you have to keep it in check.”

Another member of the math team, Tilath Asad, “I feel very proud of our team. Everyone seems to look up to us. They’re jealous of our scores. There is a lot of competition and it is very fun beating them.”

Joining in with her teammates, Kate Walker said, “I think this is an amazing opportunity to be on the team. Even though I’m not competing, I think it is cool to be on a team where you get to learn Calculus and Pre-calculus. We get to learn things most people don’t get to at school.”

With two seniors on this year’s squad, rising stars Natalie, Tilath, Kate and Emma will look to fill the void left by the graduation of Ava Garrelts and Hasnain Asad and keep the dynasty/legacy growing.