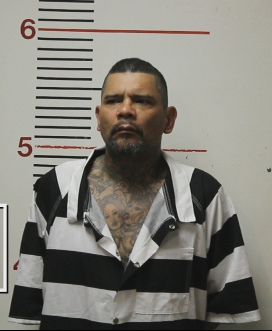 PALESTINE – The Palestine Police Department has identified the suspect arrested for shooting at officers during a pursuit.

Just before 8 p.m. on Tuesday, April 26, officers from the Palestine Police Department responded to a reported shooting at Jag’s Convenience Store at 500 W. Palestine Avenue after a vehicle and building were struck by gunfire. No one was injured at the location. The suspect was identified by witnesses as Raymond Torres, Jr., 46, of Palestine. Torres fled the scene in a black sedan.

A short time later, Officer Isaiah Pettigrew located Torres in the vehicle near the intersection of North Jackson and Green Street. Officer Pettigrew initiated a traffic stop and the suspect fled.

During the pursuit, Torres fired several rounds at officers. The pursuit continued through a neighborhood, eventually leading north on Highway 155. While on the entrance ramp to North Loop 256, Sgt. Aston Rodriguez used his patrol vehicle to stop the vehicle before it could get onto the loop, where there was heavier traffic. The suspect’s vehicle was disabled as a result of the collision.

Once the vehicle was stopped, Torres refused to comply with officer commands. Officers then had to break the windows to gain entry into the vehicle. Torres was taken into custody following a brief struggle.

A female passenger was detained and later released. The firearm was also recovered.

The suspect was transported to the Anderson County Jail and booked on the following charges:

No officers were injured during the incident. It was later discovered that a residence was struck by gunfire while Torres was shooting at officers. The residents were not injured.

“We are so thankful and blessed that no one was injured because of this senseless act.” PPD Chief Mark Harcrow said. “I commend these officers for their bravery. They put their lives on the line to get this guy stopped and off the streets. Their actions were nothing short of heroic.”

Anderson County Sheriff Rudy Flores and his agency also responded to the scene to assist. The crash investigation was conducted by the Texas Highway Patrol.