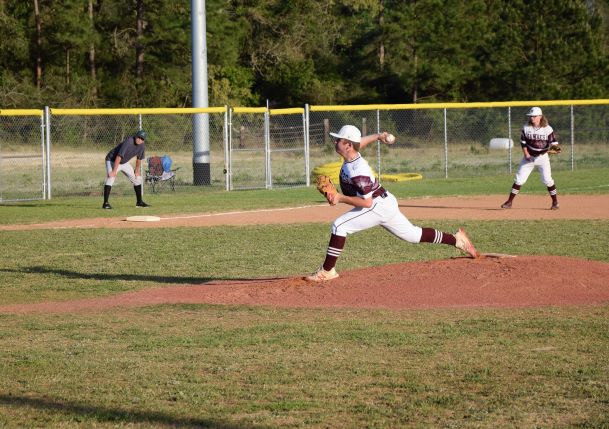 GRAPELAND – Somehow, some way the Grapeland Sandies find a way to win. Not always, mind you, but in a close game, don’t bet against the Sandies this season.

The Kardiac Kids (yeah, I ripped that off) were at it again on Thursday of last week as they took on the Normangee Panthers in a District 21-2A battle.

In the first matchup this season, Grapeland needed six runs in the top of the ninth to defeat Normangee, 12-10. This time around, the Sandies only needed one run. The Panthers should have spent a little more time in the film room before they traveled to Grapeland as the Sandies used a walk-off bunt in the bottom of the eighth to take down the Panthers.

A week ago, against Leon, Grapeland used the same strategy against Leon. This time, however, instead of Peyton Prater, Jacob Vaden came through in the clutch as he dropped down a one-out bunt to plate Rickie Gilmore and give the Sandies the 6-5 victory.

Cole Goolsby got the start for Grapeland and worked a 1-2-3 inning. When the Sandies came in from the field, they drew first blood off of Normangee starter Logan Luna.

The right-hander fanned Slade Harris and popped up Peyton Prater, but Goolsby followed with a double to left. Jason DeCluette was up next and he also doubled to bring in Goolsby and make the score 1-0.

That was all for the first inning as Jax Vickers lined out to center.

Goolsby worked another easy inning in the second while his teammates extended the Grapeland lead in the second. Johnny Lamb led off the bottom of the frame with a single. He moved to second on a wild pitch and advanced to third on a Jacob Vaden sacrifice.

Following a walk to Jayce Elliott, an error on Normangee’s catcher allowed Lamb to race home while Elliott took second. Once again, Luna limited the damage as he struck out Kacin Salmon and got Harris to pop up to first to end the second.

A quiet third gave way to the fourth where the Panthers cut the lead in half. Goolsby hit the first batter he faced in the inning but came back to coax Izaha Jones into lining out to center. Dalton Stewart followed with a single, but Goolsby fanned Jacob Ray for the second out.

Jace Metzer was up next and looped a single into center to plate a run and cut the lead to 2-1. Spencer Yellot followed in the batting order for Normangee, but lined out to retire the side.

Grapeland couldn’t do any thing in their half of the fourth and neither team managed a base runner in the fifth.

In the sixth inning, however, Normangee scored three runs to take a 4-2 lead. Kade Stone led off with a fly ball out but Jones followed with a single. Back-to-back walks loaded the bases, but Goolsby came back to strike out Metzer on three pitches.

Yellot followed Metzer to the plate and this time he came through for the Panthers as he roped 2-1 pitch into left for a three-run double.

Now trailing 4-2, the Sandies bounced back in their half of the sixth to retake the lead. Goolsby led off with a double and with DeCluette at the plate, he stole third. DeCluette drew a walk and when Vickers hit a sacrifice, Goolsby scored while DeCluette moved to second.

Lamb was up next and singled to move DeCluette to third. Vaden followed with a single to right to drive in DeCluette and Lamb, who had stolen second earlier in the pitch count. Vaden’s base knock put the Sandies back on top 5-4, but the lead wouldn’t last long.

The Panthers would tie the game in the top of the seventh but Vickers – who came on in relief of Goolsby – held them there.

After Normangee shut down Grapeland in the bottom of the seventh, Vickers returned to pitch the eighth. He walked Yellot to lead off the top of the inning and Yellot moved to third on a sacrifice. Luna drew a walk but when he tried to steal second, Goolsby – who had moved behind the plate – gunned him down at the bag. Vickers then struck out the next batter he faced to retire the side.

That brought the Sandies up to bat in the bottom of the frame.  DeCluette led off and reached first on an error. He moved to second on a Vickers sacrifice and took third on a Lamb single.

At that point, Rickie Gilmore came in as a pinch runner for DeCluette. That brought Vaden to the plate and on the first pitch he saw, Vaden dropped a bunt between the mound and home plate. Gilmore was running on contact and when the pitcher tried to flip the ball to the catcher, Gilmore beat the throw and was called safe, giving Grapeland the 6-5 win.