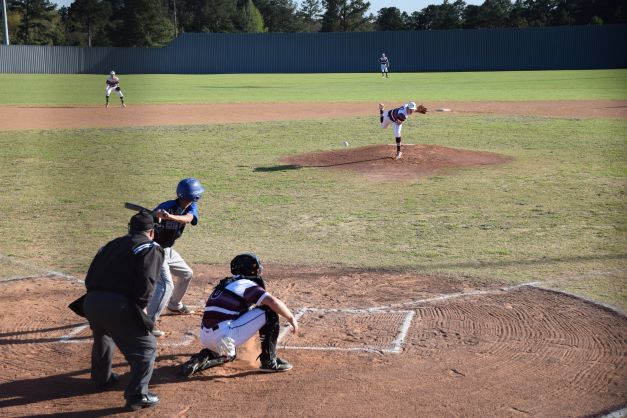 GRAPELAND – The Grapeland Sandies returned to their heart-stopping ways on Friday night as they needed extra innings to take down the Leon Cougars by a final of 5-4.

The win keeps the Sandies just a game behind the Centerville Tigers with a chance to tie the Tigers for the District 21-2A lead on Monday evening.

Back to Friday night’s game. Cole Goolsby got the start for Grapeland and gave up a lead-off hit to Leon’s Jose Carrizales. He followed the base rap with a strike out of Gannen Wise, but with Brock Bumpurs at the plate, Carrizales stole second.

Bumpurs popped up for the second out and it looked like Goolsby might get out of the inning unscathed. However, when Ryan Bacak hit a seeing eye single between second and short, a collision between Slade Harris and Johnny Lamb allowed Carrizales to score.

Anthony Haney came in to run for Bacak but on a 1-0 pitch Goolsby caught Haney trying to steal on a pick-off attempt. He threw to Jason DeCluette at first who fired down to Harris who was covering the bag and slapped the tag on Haney for the third out.

Grapeland tied the game when they came in from the field. Harris flew out to center while Peyton Prater grounded into a 4-3 force at first. Goolsby followed with a walk and with a 1-2 count on DeCluette, Goolsby broke for second. The hit-and-run was on and when DeCluette delivered a single to left, Goolsby was able to race around the bases, cross the dish and make the score 1-1.

Jax Vickers followed in the order but fanned to end the inning. Vickers would, however, redeem himself two innings later.

Goolsby went back to work in the second and after giving up a single to center, the Grapeland pitcher retired the next three batters he faced to strand the Cougar base runner and bring the Sandies up to bat.

Lamb led off for Grapeland and reached on an error. Jacob Vaden was up next and grounded to short but the throw to second pulled the second baseman off the bag and Lamb was ruled safe. Jace Elliott followed in the order and dropped down a sacrifice bunt to advance the runners.

That brought Kristian Sparks to the plate and Sparks hit a dribbler between the mound and third base. Lamb was running on contact and scored easily to make it 2-1.

That was all the Sandies could muster in the second inning and when Leon came up to bat, they took their first lead of the game.

Lucas Zarsky led off for the Cougars and reached on an error. Zarsky stole second and moved to third when Carrizales grounded out to the mound. Goolsby struck out the next batter he faced and it looked like he might get out of a jam.

Unfortunately, Bumpurs drew a walk and Bacak hit a liner to center that was misplayed, allowing Zarsky and Bumpurs to score. Goolsby managed to shake off the error and got Schrank to ground into a 6-3 force to retire the side.

Now trailing 3-2, the Sandies struck back with one swing. Prater flew out to open the bottom of the third but Goolsby followed with a single to center. DeCluette was up next, but he popped up to short for the second out.

That brought Vickers to the plate and on a 0-1 count, Vickers saw a pitch he liked. He turned on it and left no doubt as the ball screamed over the fence in left for a 2-run homer. Lamb singled but Vaden grounded out to third, however, the Sandies had recaptured the lead at 4-3.

The score remained that way until the top of the sixth when the Cougars plated a run to tie the game at four.

The Sandies were unable to do anything in their half of the sixth and a scoreless seventh sent the game into extra innings.

In the top of the eighth, Goolsby retired the first two batters he faced, but walked Schrank. Elliott came on in relief after that and he walked the first batter he faced. A wild pitch moved Schrank to third but when Trevor Carrington tried to steal second, Elliott picked him off to end the Leon threat.

When Grapeland came in from the field, they showed they could play a little small-ball. Vaden led off the bottom of the inning with a single to left and moved to second when Elliott reached on an error.

Kacin Salmon flew out to right but the runners were held up. Harris followed with a single to right to load the bases and set the table for Prater. He took the first pitch he saw for a ball but on the second pitch, Prater dropped down a perfect bunt that rolled between the mound and second base.

The squeeze was on and Vaden raced home with the winning run as the Grapeland fans went wild.