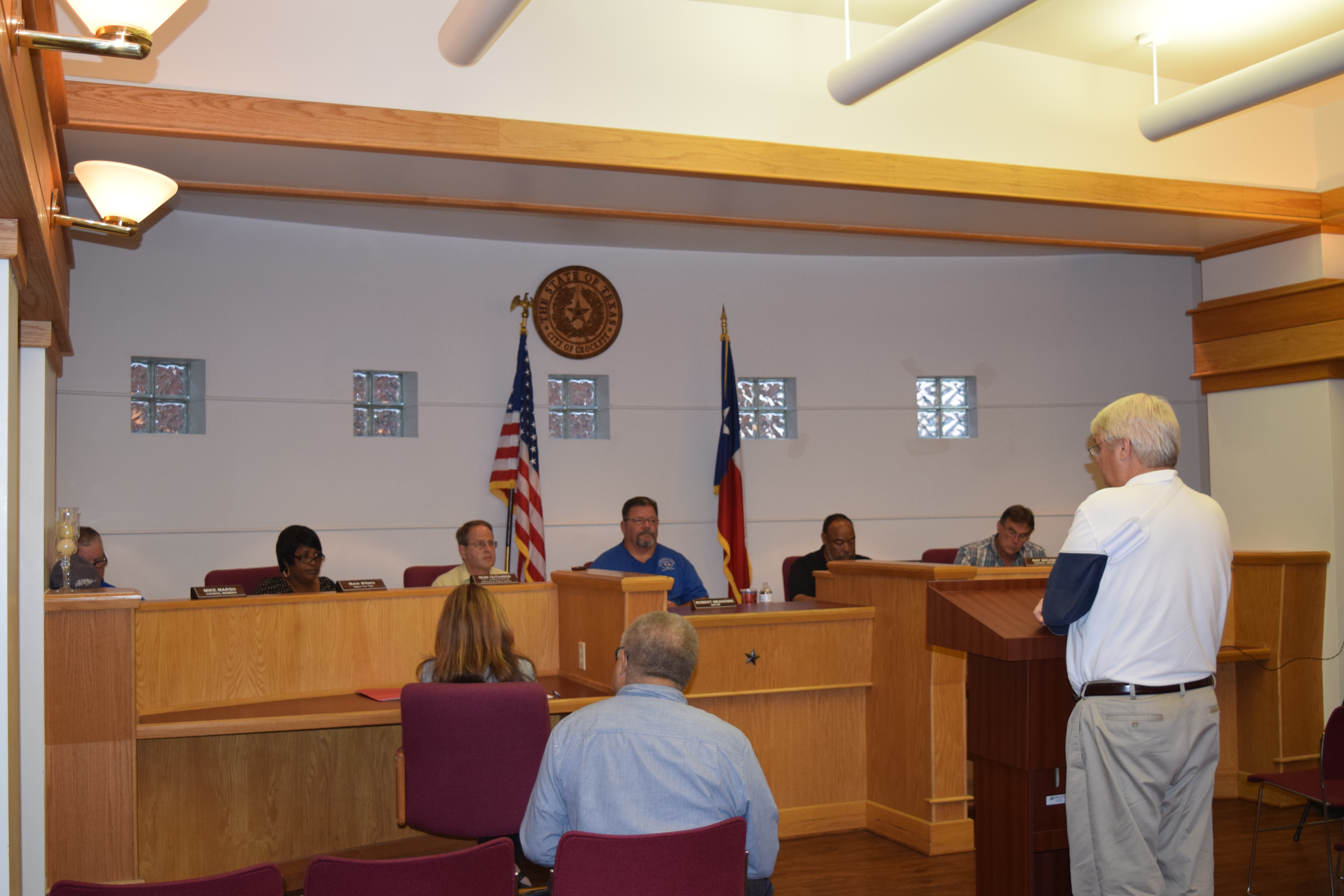 CROCKETT – The guidelines for tax abatements within the City of Crockett were reviewed during the Crockett City Council meeting held on Monday, Oct. 3 and some possibly exciting news was shared with council members.

As the council session got underway, Mayor Robert Meadows began with an apology to Precinct Five Councilman Mike Marsh for a somewhat contentious exchange between the two during a council meeting held on Sept. 19.

“I would like to take this opportunity to apologize to Precinct Five Councilman Mike Marsh. We are both very passionate about a topic that came up at the last meeting and I just feel I didn’t handle it the way I should. I feel the same (about the topic). I am steadfast in my belief and I believe he feels the same way, too. I would just like to extend my apologies for that,” Mayor Meadows said.

The matter referred to by the mayor concerned amending Chapter Seven of the Crockett City Code pertaining to Fire Prevention and Protection. At the Sept. 19 meeting, the mayor and Councilman Marsh sparred over what Meadows believed to be Marsh’s “micro-managing” of the fire department.

Following the approval of other items, the council retired into executive session at 6:17 p.m. for deliberations regarding the Crockett Economic and Industrial Development Corporation (CEIDC) and sanitary sewer service offered to a prospective business.

When the council emerged from behind closed doors at 6:59 p.m., no action was taken on the matter.

The last agenda item discussed during the Monday night council meeting concerned the City of Crockett’s tax abatement guidelines. The mayor opened the discussion and said, “Several weeks ago, (CEIDC Executive Director) Flint (Brent) approached me and said he was concerned about the current tax abatement guidelines we are operating under. He indicated the guidelines had not been updated in quite some time. It is recommended every two years and we are about 10 years behind.”

Meadows reported after the last council meeting he, the CEIDC director and the city administrator met to review the city’s current tax abatement agreement.

The mayor added they used a current currently used by another municipality and “… tweaked it a little bit. We feel like we cleaned it up somewhat and simplified it in some ways.”

Brent added he had also discussed this with the CEIDC Board of Directors as well as with Hutchison and Houston County Judge Erin Ford. “From my point of view, we improved upon the original. We customized it to what we want for the city,” he said.

Two of the provisions added to the tax abatement guidelines were wage requirements and a “clawback clause.”

“If someone picks up and leaves half way through (a contract),” Brent explained, “We will have some avenue to recoup the money.”

Brent was asked if the county had passed this type of tax abatement guideline. Brent indicated his belief they had, but stressed he had not seen the county’s final version.

Meadows added, “This helps project the image that we are united. Not just in our city, but in our county as well.”

Brent also commented, “This was a collaborative effort by two taxing entities (the City of Crockett and Houston County) and the CEIDC to mold something everyone could live with.”

Hutchison questioned the council if the county and city tax abatement agreements could be reconciled and adjusted to reach the same goal, would it be possible for the council to approve the changes to the tax abatement guidelines at the next council meeting.

Before the matter was put to rest, Brent expressed, “It would be pertinent for us to move on it. They have deferred the closing date to Oct. 24. They have not said this is in relation to any of this, so I’m not going to suggest it, but it would be prudent of us to be proactive on this. So, the next meeting is Oct.17?”

Meadows said it was possible to call a special session if needed but Brent said Oct. 17 should be okay.

Councilman Marsh questioned what was being closed on and CEIDC Board Chairman Chris von Doenhoff, also present at the meeting, explained, “Real estate. They are closing on the acquisition of the real estate. They are buying from two different sources. One is from us (the CEIDC) and the other is a small frontage part from another owner. There are two closings scheduled for Oct. 24 in Houston right now., so if you can act and approve the guidelines ahead of time, then they will have it in writing to know whether they can qualify or not.”

Councilman Ray Bruner verbalized the question hanging in the air and asked, “Who are you closing this with? What business?”

“I’m sorry,” von Doenhoff apologized. “This is the (auto) dealership. The acquisition of the land is scheduled to close on Oct. 24.”

Councilman Bruner further asked, “Where is the land?”

The CEIDC Board Chairman said, “It’s on the southeast side of the loop. The small tract is next to the Wallace tractor place and the other 10 acres are part of the industrial (park) subdivision. The two together will make up almost 13 acres.”

Meadows said he did not want to drag his feet on this and did not mind calling a special session of the council.

Brent added, “Everything is right there on the cusp of happening.”

Following several additional minutes of discussion, it was determined a special council session would be called next week to approve the tax abatement guidelines.

Chief Angerstein further commented, “We are extremely happy with our resident firefighter program. We are into our second month of that and we have seen some really good results. We have three firefighters who live at the station, outside of the job hours. One has completed the fire academy through a grant program, and all three of them are starting EMT school later this month. Once they complete that the other two will continue on to the academy. There are all paid for through grant money with a very low cost to the city and allows us to staff three people at the station during evenings and weekends.”

After announcing the parking lot on the north side of the fire station was scheduled for completion within a few days, Angerstein remarked, “On the same note as Mayor Meadows, I appreciate and respect each and every one of you and your (city council members’) opinions. None of your opinions are taken personally. I understand exactly what your direction was and I do see the bigger picture.”

City Administrator Sean Hutchison explained what this entailed. “This is part of the federal procurement process which requires we seek requests from five different engineering firms along with their qualifications, along with proposals from five different grant writing firms. Through the selection process it was determined GrantWorks would be awarded the grant administrative portions and KSA Engineering would be awarded the professional engineering services for that particular grant. Again, we are going through the procurement process, prior to writing the grant. If we are awarded the grant, we will enter into contracts with those two firms. This is just a procedure we have to follow in the federal grant program.”

With no further business matters to discuss, the meeting was adjourned at 7:15 p.m.