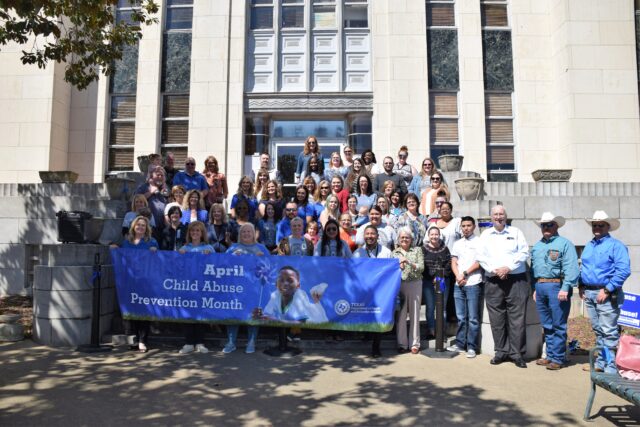 CROCKETT – April is Child Abuse Prevention Month and to commemorate the month, a ceremony was held on the steps of the Houston County Courthouse on April 1. Community and religious leaders, along with city and county officials were all on hand to mark the occasion.

Pastor Tim Allen opened the ceremony and said, “This ceremony falls on April Fool’s Day but we’re not foolin’. We’re going to wipe out child abuse. I am so proud of this county, the child welfare board, CPS, law enforcement and our judges. Together, we are going to wipe it out.”

He added, “We are their (children’s) voice too. We are out there; we see things and we need to report these things. It shouldn’t hurt to be a child.”

Following several introductions, Allen turned the program over to Charlana Kelly for a word of prayer. Once she concluded, County Judge Jim Lovell read a proclamation declaring April as Child Abuse Prevention Month in Houston County.

The judge also provided some rather disturbing statistics to the attendees. He reported there were 262,420 cases of child abuse and neglect reported in Texas during Fiscal Year 2021. The number of confirmed victims of child abuse across the state was 68,517 with 114 of those children residing in Houston County, he said.

Once the judge concluded, George Ford, the Executive Director of the Texas Council of Child Welfare Boards (TCCWB), spoke to those in attendance. Ford expressed his appreciation to Rev. Allen, who serves as the TCCWB and said the board had recently amended its bylaws so Allen could serve for a third term.

After a few more speakers, a flag was raised and a balloon release was held to commemorate the victims of child abuse.

Meet the New Boss
High Speed Chase from 2019 Ends in Prison
Rain or Shine, the 41st Bluegrass Music Festival Will Go On
Please follow and like us: