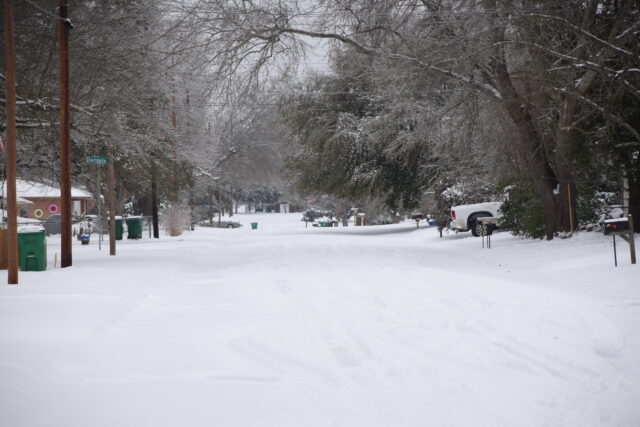 EAST TEXAS – I know what you’re thinking. If he’s gonna use a song title, why not go with Vanilla Ice and the ever infamous “Ice, Ice Baby” or “Ice Cold Ice” by Hüsker Dü? And if there’s a problem, yo I’ll solve it.

First, it’s Robbie Van Winkle and second, probably only a handful of folks around these parts know who Hüsker Dü is. Besides, I learned how to make an umlaut on the keyboard this week!!

In all seriousness, though, Baby, It’s (about to be) Cold Outside!

Bundle up because Old Man Winter is headed our way.

According to the National Weather Service (NWS) out of the Dallas/Fort Worth region, Wednesday will see a 50 percent chance of rain, mainly after noon. It will be cloudy, with a high near 66. Precipitation amounts between a quarter and half of an inch are possible.

On Wednesday night, things take a turn for the worse with more rain and possibly a thunderstorm. The low will be around 27. There will be north/northwest winds with speeds between 10 to 15 mph and gusts as high as 20 mph. The chance of precipitation is 90 percent.

Thursday morning will see freezing rain, possibly mixed with sleet, mainly before noon. The temperature will fall to around 25 by 5pm. The winds will be out of the north/northwest with speeds around 15 mph and gusts as high as 20 mph. The chance of precipitation is 80 percent.

On Thursday night, it will be mostly cloudy, with a low around 13. The north/northwest winds will continue with speeds expected to be around 10 mph and gusts as high as 20 mph.

Friday, Feb. 4 will be partly sunny, with a high near 34. North/northwest winds around 10 mph will continue.

It will drop down into the teens once again on Friday night with a low around 17. The winds will be mainly out of the north with speeds between five and 10 mph.

Saturday will be mostly sunny, with a high near 41. The winds will be negligible at around five mph. On Saturday night, it will be partly cloudy, with a low around 26.

On Sunday, it will hopefully warm back up with an expected high of nearly 50 and on Sunday night it will be mostly clear, with a low around 27.