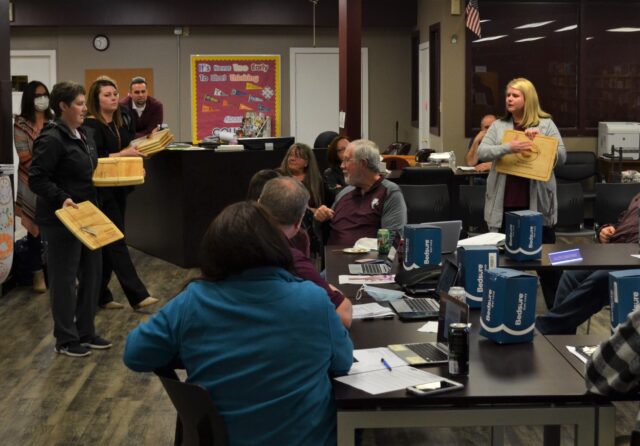 GRAPELAND – School Board Appreciation Month was in full swing during Monday’s GISD Board of Trustees meeting. After a 5-star steak dinner prepared by Glen and Kristi Streetman, the open portion of the meeting started with tokens of appreciation for the board members from the administration and campuses including outdoor chairs, custom cutting boards mugs and many hand-decorated items from students. Superintendent Don Jackson and several staff members extended thanks to the board members for their service to the district.

A video followed featuring messages from Elementary students. “When I grow up…” gave a positive indication that the future is in good hands. The students ended the video by thanking the board for making their dreams possible.

District Nurse, Kristy Word, followed with good news regarding COVID cases in the district. After a high number of 84 cases last week, which forced the school to close for a brief period, this week’s numbers had dropped drastically to 29. Word thanked the district for their prudent choice to close as she believes the days of closure played a huge role in the drastic reduction of cases.

District Testing Coordinator Kristi Bell Gave a presentation on the district’s Texas Academic Performance Report (TAPR.) According to the report, several areas tested showed a decline in student performance last year due to the impact of COVID-19, but the data shows that numbers fell statewide, and that the district’s numbers are near or above the state’s numbers in many cases.

The board moved forward with the meeting by approving several agenda items including the following;