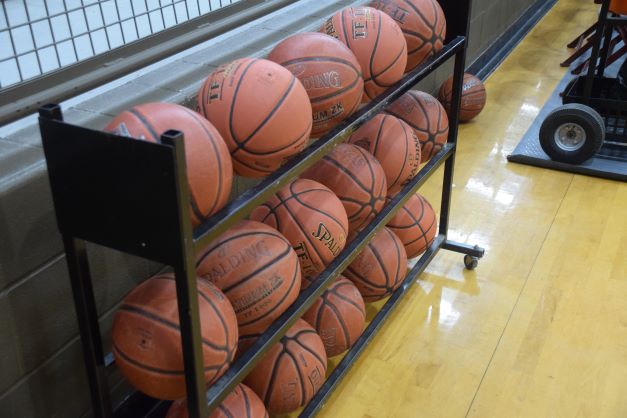 GRAPELAND – After coming oh so close to winning the Class 2A State Championship in basketball last season, the Grapeland Sandies have regrouped and have been preparing to make another title run this year.

The Sandies will look a little different this year as they graduated three of the starting five from last year’s State Runner-Up team. With a wide-open Region III this year, Grapeland has enough depth to be considered a legitimate threat to return to San Antonio once again this year.

On Friday of last week, the Sandies tipped off their 2021-2022 season as they welcomed the Elkhart Elks to town. The Elks hung tough in the first quarter, but shooting woes – caused by increased defensive pressure from Grapeland – forced Elkhart out of its game as the Sandies pulled away to win by a final score of 82-46.

Grapeland jumped out to an early lead thanks to a hot start from Omarian Wiley who dropped in 10 first quarter points. He was joined in the scoring column by Zan Anderson and Cadarian Wiley, who both had four, as the Sandies led by a score of 18-15 after the first eight minutes of play.

Tyler Stafford and Cale Starr kept the Elks close with seven points apiece while Jayden Chapman chipped in a free throw to close out the Elkhart first quarter scoring.

The second quarter saw the Sandies take control of the game as they held the Elks to only seven points on a three-pointer from Chapman and twos from Starr and Thomas Wyett.

While Elkhart went cold from the field, Grapeland started to heat up, thanks to the Wiley brothers. C. Wiley powered his way inside for 10 points while Omarian added six. Landon Jackson, Riley Murchison and Lakerina Smith all had two apiece as the Sandies opened up a 40-22 lead at halftime.

Following the break, the Elks’ offense found a little spark as they nearly doubled their second quarter production. Starr led the way with five while both Chapman and Wyett had three apiece. Coen Starr closed out the third quarter for Elkhart with a bucket to help account for the Elks’ third quarter point production.

The Sandies, meanwhile, kept up their torrid pace as they went for 24 in the third to push their lead to 64-35 after three periods of play were in the books. Smith paced Grapeland with nine, while Murchison had five. Anderson dropped in four, the Wiley brothers had two apiece and Kionte Willis found the scoring column with two.

With nearly a 30-point lead, Coach Blake Doughty went to his bench to get some of his reserves some quality playing time. Tray Davison paced the Sandies with five points in the fourth, while Jackson knocked down a three. Five other Grapeland players had two apiece as the Sandies pulled away for their season-opening 82-46 win.

The Elks were led in scoring by Cale Starr with 16 points and was he was joined in double figures by Jayden Chapman with 10. Stafford Tyler and Thomas Wyett both went for seven while Lorenzo Alcorta, Coen Starr and Trystyn Tidrow all had two.

The Sandies were paced by Omarian Wiley with 20 and Cadarian Wiley with 18. Lakerina Smith had 13 and Zan Anderson netted 10. Tray Davidson and Landon Jackson both had five while Jax Vickers and Kionte Willis had two apiece.