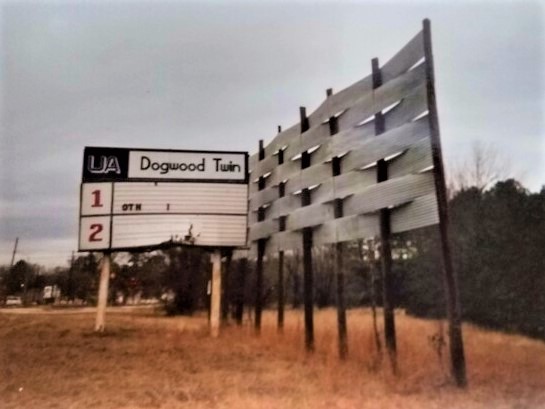 Looking Back at the Dogwood Drive-In

PALESTINE – No evidence exists that I enjoy movies anyplace other than the comfort of my own living room. My wife and kids have lamented for years over the fact that I don’t enjoy the movie-going experience. It’s not that I don’t enjoy the big screen or the comfort of most theater seating. I simply don’t like crowds, especially vocal ones after I’ve shelled out a full Benjamin for a few tickets and some refreshments. I don’t need a running commentary from a stranger to understand what’s taking place on the screen. My wife finds this ironic because I can’t keep from applying a running commentary myself during a movie, a gift I apparently passed along to my son as well. But hey – I paid to see it. It’s ‘my’ movie now, so I like to point out my observations.

I know. It makes no sense whatsoever.

But it wasn’t always this way for me. Sadly, my kids will never know the version of me who loved going to the movies. They may also never know the pleasure of viewing a feature motion picture in an outdoor environment with a small metal speaker hanging on the window… or utilizing the AM band on their car stereo for that amazing in-car movie experience.

By the time I first experienced the Dogwood Drive-In it had been open for about 30 years and was the only one in town. At first it wasn’t a big deal for me. I was relegated to the back seat where the view was almost as bad as the scratchy sounds coming from that metal single-cone speaker. But it was an adventure, so some concessions were acceptable.

By late 1981, however, I had secured a driver’s license. I cannot begin to explain what moving to the driver’s seat does for the drive-in moviegoing experience. Driving up to see a low-budget B movie, pulling up to a speaker box near the center of the screen, far enough back to get a good straight-on view, then settling in for a truly visceral experience… all I can remember thinking was “Oooooooh. This is WAAAY better.”

And it was. Eventually after enough visits you could learn which speakers to avoid. Some were mildly better than others, but most were sketchy at best. But in 1982 that all changed. I drove up to the theater one evening and was instructed to tune my AM dial to 535. I did so and was suddenly met with the sweet, still-mono tones of the pre-movie advertisements. I was in heaven. Suddenly I was the master of the sound. My four Pioneer speakers coupled to the under-dash Kraco ten-band equalizer, which was held in place by about 12 feet of duct tape, would massage and tweak this AM signal to theater-level perfection. In retrospect it was probably terrible, but at that moment I felt like royalty.

Having no working knowledge of radio broadcasting, I wondered how people could be kept from parking outside the drive-in and tuning in for free. My question was quickly answered as I exited the gate only to find that the AM signal didn’t exit with me. I thought it was some sort of voodoo. I learned later that it wasn’t.

The experience wasn’t always about getting away from the crowd, however. On occasion my friends and I would pack as many people as we could squeeze into a pickup and take a stack of aluminum lawn chairs. My cousin Dave had the best setup for sound. He had installed enough extra wire to his Jensen Triax speakers so that he could retrieve them from behind the seat and stick them to the corners of the cab by the big magnet on the back. Again, a look back doesn’t reveal a great stereo experience, but at the time it seemed so cool. I had the pleasure of experiencing the animated masterpiece ‘Heavy Metal’ in 1981 with this technical setup. That lawn chair in the bed of that truck may be my most comfortable moment in this lifetime.

The movies weren’t always Oscar-worthy at the drive-in during the 80’s. I recall titles like ‘Bad Boys.’ Not the successful Will Smith/Martin Lawrence movie. This was a juvenile prison movie featuring a very young Sean Penn. His role as Jeff Spicoli in ‘Fast Times at Ridgemont High’ was far more award-worthy than this one. Other titles from the 80’s B list included gems like ‘Pieces’ and ‘The Beast Within.’ Both horror/slasher efforts that weren’t quite as memorable or near the same quality level as your Jason, Freddy of Michael Myers. Against my mother’s wishes (assuming I asked) I saw a double feature of 1976 gems called ‘Demon Lovers’ and ‘Blood Sucking Freaks.’ Yes really. To a 17-year-old kid, this was can’t miss entertainment. Looking back I sort of wish I’d missed it. They were both as bad as they sound.

In 1982 a second screen (broadcasting on AM 640) was added which sat approximately where the modern Dogwood Six sits now. The Dogwood Twin remained in operation until it closed in 1991.

While a few modern drive-ins have popped up across the country in recent years, it’s hard to think that they may catch on with any frequency. It’s rather a shame. Technology has bypassed the drive-in, but I’m not sure the change is all for the better. Sometimes you just need a crummy metal speaker to hang on your window.