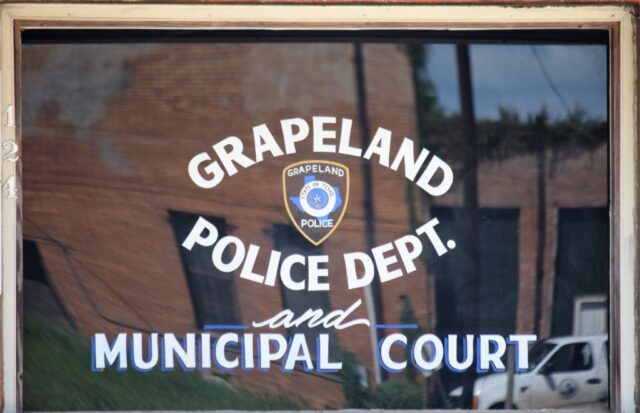 GRAPELAND – In one of the first official acts in the City of Grapeland’s new City Hall, the Grapeland City Council terminated the employment of the city’s police chief.

An emergency meeting of the Grapeland City Council was held on Friday afternoon, Sept. 17 to address the continued employment of Police Chief Kody Stephens.

Present at the meeting were Mayor Mitchell Woody along with Councilmen Justin Lumbreraz, Joseph Musick and George Pierson. Council members Velda Parker and Eddie Childress were unable to attend the session.

Mayor Woody called the meeting to order at 4 pm and moved the city leaders into the actionable items portion of the agenda.

“We have a lot to discuss, so council, I would like if one of y’all would make a motion for items four and five to go into executive session,” the mayor said.

A motion was made and unanimously approved to adjourn into executive session at 4:02 pm.

After approximately 20 minutes, the mayor and council members emerged from the closed-door session.

Once the mayor reconvened the open portion of the meeting, he said Councilman Lumbreraz had “… a couple of motions to make.”

“So, on item number four,” Lumbreraz said, “I would like to make a motion to terminate Kody Stephens, effective immediately, as the Police Chief of the Grapeland Police Department due to items and charges addressed in this termination letter.”

The motion was seconded and unanimously approved.

The next motion made by Lumbreraz was to “… appoint Thomas Shafer as interim Police Chief, effective immediately.”

This motion was also unanimously approved. With no further business, the council session was adjourned.

Following the meeting, the mayor was questioned as to what items and charges were detailed in the letter of termination.

The mayor replied, “At this point, all I can do is refer you to the Houston County District Attorney. That’s all I can say.”

Attempts to reach the District Attorney’s Office were unsuccessful as of press time.

This is a developing story and more details will be provided when they become available.