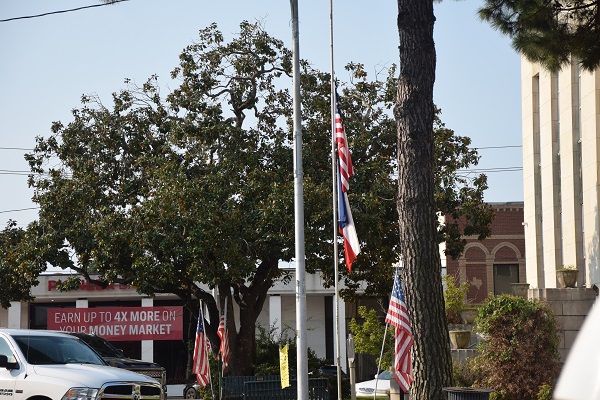 CROCKETT – It was 20 years ago – on a bright, late summer’s morning – the world changed forever. Two jet airliners were hijacked and detoured to New York City where they barreled into the World Trade Center, causing the Twin Towers to collapse into a pile of rubble.

A third plane was hijacked and slammed into the Pentagon in Washington, D.C. A fourth plane was also commandeered by terrorists, but crashed into a field in Shanksville, Pa., thanks to the actions of the passengers. Speculation has it, that plane was headed for the White House.

The events of Sept. 11, 2001 brought Lady Liberty to a knee, but she quickly rose to shine her beacon of freedom to the rest of the world and to show while the American Spirit might be battered, it was never broken.

On Friday morning, Sept. 10, area residents gathered outside of the Moosehead Cafe in Crockett to remember and reflect on the tragic events of 9/11.

Organized by former Crockett Mayor and Moosehead Café owner Joni Clonts, the remembrance ceremony began shortly after 9 am with an invocation from Pastor Leon Wallace of Good Shepherd Fellowship Church.

At the conclusion of the prayer, a bell was rung by Crockett Firefighter David Beaulieu to symbolize the loss of live on 9/11. The bell ringing was followed by the playing of Taps and as the last notes faded into the sky, those in attendance filed into the Moosehead for a continuation of the ceremony.

Once everyone had entered the restaurant, Houston County Judge Jim Lovell addressed the attendees.

“It is an honor and privilege to stand before you today and say a few words,” he began. “This is not a celebration but rather a commemoration for all of those who lost their lives on 9/11.”

As the judge continued, he recognized the first responders in attendance and said it was a blessing to have such selfless, dedicated individuals serving the Houston County area.

“You know the sky on 9/11 was blue and cloudless, a lot like today. It would give no hint of the destruction we would see in the next few hours. Most of us will never forget where we were and what we were doing at the very moment when our world changed. Nearly 3,000 people died needlessly, in what remains the deadliest act of terrorism in history,” Judge Lovell said.

He recalled his thoughts that morning 20 years ago and said his first reactions were those of non-belief, denial and shock.

“I felt an emptiness and then I got mad. I got angry. Then, of course, I felt grief for all of those who had lost their lives and for the families they had left behind. We can’t always prevent things from happening that shatter our lives. The one thing we do have control over is the way we respond to it. You know (KIVY DJ) Joanne (Warner) said this on the radio this morning and I agree. We are not about what happened on 9/11 but rather what happened on 9/12, as the American Spirit – although tested – it prevailed. This country came together in unity, showing our capacity for compassion, resilience and hope,” he said.

She also expressed her deepest appreciation to the first responders and their families.

“Today, we remember on Sept. 11, 2001,” Dr. Fisher said, “America, the home of the brave and the land of the free, experienced a terrible, life-changing disaster. We remember with sorrow and compassion, the loss of so many lives and the shattered dreams of what could have been. It created a devastating effect on families, the destruction of property and even the altering of our heritage and history. However, even in the midst of our personal sorrow, I remember the goodness of God.”

Dr. Fisher next read a proclamation proclaiming Sept. 11 as “Always Remember 9/11 Day” in the city of Crockett adding, “I urge every citizen this day to mourn, reflect and rededicate ourselves to ending terrorism in commemoration of the terrorist attack.”