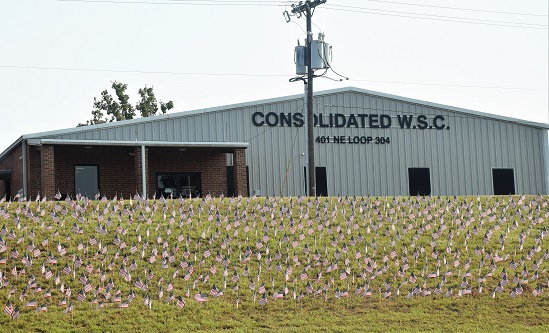 CROCKETT – As the country pauses to reflect on the 20th Anniversary of Sept. 11, 2001, there are many tributes and ceremonies planned throughout the nation. Some will be lavish in nature while others will be simple and understated.

On the hill where the Consolidated Water Supply Corporation (CWSC) is headquartered, the staff of CWSC has created a memorial to honor those who perished on 9/11. It is simple and yet breathtaking in its scope as the CWSC team members have placed 2,977 small American flags on the hillside facing Loop 304. The 2,977 flags represent the 2,977 people who lost their lives to terrorism on that bright September morning 20 years ago this Saturday.

While she and several other CWSC team members were placing the flags on the hillside Thursday morning, CWSC General Manager Amber Stelly took time to discuss the tribute.

“We are setting out 2,977 – I know the number varies – but we’re setting out flags representing the total number of deaths on 9/11. Our goal is to set all of the just under 3,000 in the next two days. It should cover the most of the entire hill,” the GM said.

To help put things in perspective, she explained initially only three or four people were working on the project. At first, the crew put out what they thought was a significant number of flags. When the first count of flags was taken, however, they had only placed 568 flags, representing 568 deaths meaning 2,409 people were still left to be memorialized.

“We talked about this for a while,” Stelly said. “We have quite a few patriots who work here and I think we are all patriotic. I am the spouse of a veteran. Really, it’s just Americans looking out for all the Americans we grieved on that day. The 20-year anniversary seemed appropriate for us to do something big and we hope to continue to do something from here on out.”

Asked where she was when she heard the news about the horrific events that unfolded 20 years ago, Stelly said she was in an American History class in high school.

“The most patriotic teacher I had at the time – he came in and told us what happened – it was the first time I had ever seen anyone’s face go completely white. I will always have that image with me,” she said.