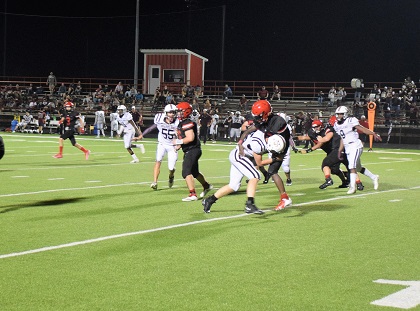 EAST TEXAS – Week one of the 2021 Football Season is in the books for most everyone. Some schools had to postpone or cancel their games due to COVID-19, but the area schools managed to dodge the virus even though it hit close to home.

While they don’t play football, Latexo ISD had to briefly cancel classes before the season began and Kennard ISD has cancelled classes until Sept. 7. The Cayuga Wildcats’ game against the Mt. Enterprise Wildcats was cancelled because of COVID-19, however, they picked up a game against the Cushing Bearkats but lost by a score of 44-28.

The Frankston Indians managed to get in their Week One game against the Timpson Bears but lost 61-0. Now, however, their Week Two game is in doubt because of the virus.

For those teams around the immediate area who were able to get in their opening week contests, the results were pretty good as four of the six teams covered by The Messenger won.

Starting at the Class 2A level, the Grapeland Sandies were on the road as they faced off against the Shelbyville Dragons. The Sandies compiled over 500 yards of total offense (201 passing and 345 rushing) as they pummeled the Dragons by a final score of 50-30.

The Lovelady Lions were also big winners in a rivalry game against the Groveton Indians. Lovelady fell behind early but bounced back quickly to crush Groveton by a final score of 51-30.

Moving to the Class 3A level, the Elkhart Elks won a thriller over the Buffalo Bison by a final score of 34-33. The Elks jumped out to a two touchdown lead only to see the Bison cut it to one late in the fourth quarter. Still, the Elks hung tough and pulled out the victory, which equals their entire win total from 2020.

The Westwood Panthers also picked up the win on Friday night as they overcame a 21-10 halftime deficit to defeat the Price-Carlisle Indians by a final score of 23-21.

The Crockett Bulldogs are still getting used to a new system under first-year Head Coach Alton Dixon and it showed on Friday night as the Bulldogs fell to the Corrigan-Camden Bulldogs by a final score of 35-14.

The Palestine Wildcats also took it on the chin as they fell to the Van Vandals by a final score of 45-16.