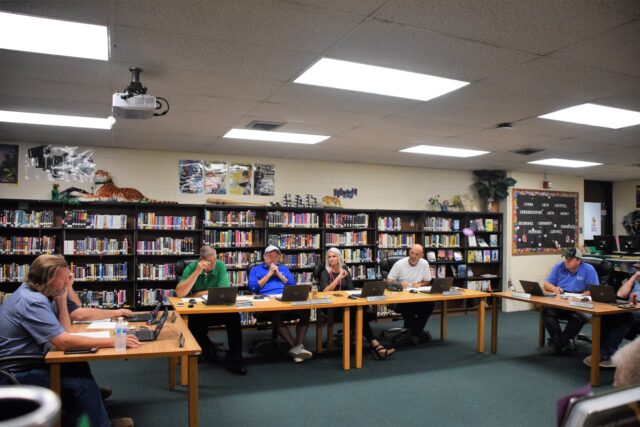 LATEXO – The Latexo Independent School District Board of Trustees met in a regularly scheduled session on Thursday, July 15 to begin the final preparations for the upcoming 2021-2022 school year.

The meeting was called to order at 6 pm and following the invocation, along with pledges to the American and Texas flags, the board took time to recognize the custodial, maintenance and cafeteria staffs.

“I’m extremely proud of our custodial staff which is why I brought them in here to brag about them,” Latexo ISD Superintendent Michael Woodard said.

The superintendent expressed his appreciation to Linda Ross, Connie Easter, Johnny Hatch, Rodney Jolly and Ronald Sanders for their efforts in preparing the elementary school for the new school year.

“I can’t say enough about these guys. They have already finished the whole elementary and all the high school rooms. The only things left up here are the hallways. I want to tell you guys how proud I am of you and what you’re doing for us. We want to keep you happy,” he said.

Board President Kelly Nicol added, “You guys are the first line of defense in keeping these kids healthy. It is a real important job and we appreciate you doing it.”

“We had several applicants and this one rose to the top. We didn’t know the ties she had to the community until after she was named,” he said.

The new principal commented, “I’m excited to be back in the community I grew up in. I graduated from Crockett High School. I’ve been gone for a long time, but I’m happy to be back. We have great things going on at Latexo Elementary and I’m excited to take us to the next level.”

Jenkines was formerly the counselor at Madisonville Intermediate.

As the meeting continued, Woodard reported the district had been awarded the Elementary and Secondary School Emergency Relief (ESSER) grant in the amount of $720,737. The initial allocation is two thirds of the total grant. The remaining allocation will be awarded at a later date and will be for $360,368 for a total of $1,081,105.

The ESSER grant was accepted by the board as presented.

The pay-scale for LISD teachers was also brought forward during the meeting. LISD will pay an additional $3,500 above the state mandated pay-scale. For example, a beginning teacher with zero years of experience will earn $37,160 ($33,660 + $3,500 = $37,160). Furthermore, the district will also provide a 21st and 22nd step for teachers with over 20 years of experience.

Also addressed at the meeting was the topic of cafeteria pricing. Woodard explained LISD was currently charging below what the TEA required and as a result the prices would need to increase slightly.

“For Latexo ISD, the paid lunches that were calculated did fall under the required amount, therefore making us out of compliance. What this means is that based on the calculated, weighted average of what should have been for 2020-2021, it should have been $2.68. However, due to COVID and a change in personnel, that did not occur. I am going to recommend that we increase the amounts for 2021-2022 to $2.60 for the elementary and $2.75 for the high school. This will keep us within the 10-cent rule. The 10-cent rule is set by the state and is all you can go up at one time,” the superintendent explained.