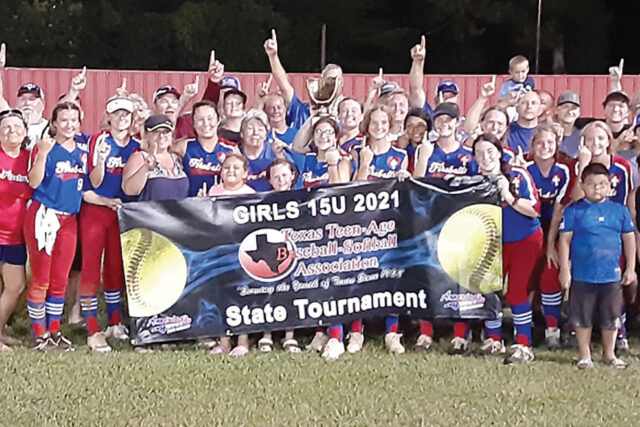 ATHENS –  The Crockett Fireballs once again competed for a Texas Teenage Softball State Championship this past week in Athens.  The Fireballs won in dramatic fashion over a Troup team after a virtually impossible path.

But this story starts many years ago back in 2013 when the Fireballs first stepped onto the diamond at Davy Crockett Park.  Richard Omelina as head coach along with assistant coaches Jason Allen, Jerry Dise and Mike McCreight started the Fireballs back then and the girls were an 8u team.  They were young and full of spirit.  They saw success immediately going undefeated in the regular season and advancing to the State Tournament after coming in second in their district tournament.  The Fireballs would go 0-2 that first year but it definitely lit a fire in the coaches and girls to want more.

Over the years since that first team the Fireballs have never lost a regular season game and have advanced to the State Tournament every year.  It seemed like every year the girls would run into the Rogers Hotshots team and that would be the end of their season.  The girls would go home and practice a little harder each year putting in the work to get better.  Most girls joined travel ball teams to be able to play year around.  The parents put in the time as well hauling their kids all over the state and sometimes the country to play.  The common goal was to get better.

It was only fitting that in the 2019 Season, the Fireballs once again faced the Hotshots. With a seasoned veteran group of 12 year olds (if there is such a thing) the Fireballs did what no other team from this area has ever done.  They won the 12U TTSA State Championship.  It was a great victory and all the girls and coaches had finally reached their goal of winning it all.

It took about a week for all that to wear off and the girls began to feel a burn to repeat as 15U champions.  They went back to their perspective travel teams and went to work.  Girls playing softball year around sometimes 8-10 games in a single weekend or maybe an all night tournament that would last until the sun came up the next day – all to keep playing the game that they loved and to get better.

When the 2020 season came around, no one really knew what would happen due to COVID.  The Fireballs advanced through to the State Tournament as they had done in each of the previous years.  The Tournament was held in Rockdale and although the Fireballs were a very young team, they managed to put themselves in a place to win.  They reached the championship game against Belton but would run out of gas after a blistering hot day of softball where a team of aged out players from a 6A school defeated them. In Fireball fashion, the girls were not satisfied. They couldn’t wait to get back the next year and the only goal in mind was to win.

This year the Fireballs were on a mission and as usual went through the regular season undefeated and reached the State Tournament undefeated.  This year the tournament was held in Athens.

The first game was against Grand Saline.  Katy Allen pitched a great game but the bats seemed a little off.  The score would eventually be 8-1 and due to a rain shower which plagued the tournament all week long, Grand Saline forfeited and the Fireballs advanced to the next round.  Next they faced a tough Cameron team.  They had a great pitcher and their shortstop was a real player.  Neither team could get much going.  The Fireballs could only muster one run and would face the top of the order with time expired in the bottom half of the inning.  Taylor Dise had pitched a whale of a game but with 2 outs and a runner on second, gave up a walk off home run to the Shortstop (it was actually that kid’s birthday.)  The girls were sent into the losers bracket and could have easily laid down.  Not these girls though.

They all conspired to get the parents to drive them into Tyler and go to DBAT (an indoor batting cage). They spent the afternoon before their next game working out the kinks and preparing for Thorndale, who had beat Cameron in their District tournament.  When the girls hit the field they were on fire and handed Thorndale a 9-0 loss.  The next morning, as all were superstitious, they all went back to DBAT and came back to play Rockdale at 5 p.m., who they beat 18-0, and Valley Mills at 8:30 p.m., who they beat 6-1.

This would put the Fireballs back face to face with Cameron who handed them their first loss.  The game was at 10 a.m. Friday morning so no time for DBAT.  The game was tight going back and forth.  Cameron struck first and got the lead 1-0.  Taylor Dise, determined to pay back Cameron for the walk off home run, came to the plate the next inning and hit her first home run to tie the game, and another run would cross the plate to give the Fireballs the lead.  Cameron would then come back and score 2 runs the next inning to go ahead 3-2.  With time expired, the Fireballs would score another run and send the game into extra innings where Charlee Biano hit a shot to right center to score Lauren Woodard from second to win the game.  The Fireballs went into the zone after that.  Playing at 12 p.m. against Athens winning 9-2 with a home run by Baylee Omelina.  They then played at 4 p.m. against Riesel winning 9-1.

At this point the girls had played 3 games and would have to play Troup who was undefeated and had run ruled every team they had faced.  There was no time limit and the Fireballs would have to play a full 7 inning game –  and then again after the first game if they won.  The Fireballs would start off on fire scoring 5 runs in the first inning.  They kept their foot on Troup’s throat all game winning 15-10.

The second game would start at 9:15 p.m.  The girls had been at the park for more than 12 hours.  You would think that they were tired (and I am sure they were) but they didn’t let it show.  The girls spent their intermission dancing in front of the dugout.  The Troup girls seemed in awe watching the girls dance wondering why they weren’t tired and probably also wondering how many times they would have to endure hearing the word “Fireballs” the rest of the night as the song “Fireball” by Pitbull played from the dugout.  They also wondered which pitcher they would face.  Katy Allen had thrown 3 games already and Taylor Dise had pitched 2 as well.  Troup felt as though they were worn out.  Little did they know that Lauren Woodard would get the start.  She had not pitched the entire tournament.  No one had seen her pitch at all.  She completely shut down the Troup hitters and took a 7-1 lead into the final inning.  With 2 out, Lauren pitched a drop ball that the Troup player dribbled to the mound.  Woodard scooped up the ball and threw the runner out at first to get the win and the State Championship.

All the girls had dug down deep and played 14-plus hours of softball against fresh opponents.  Charlee Biano played like she was on a mission her fielding and hitting was like nothing I’ve ever seen before.  Shelby Eberts hit the ball great from the lead off position.  Madilyn Smith made several great plays at second base and her bat heated up every time it was needed.  Natalie Nicol played great defense and came through when she was needed at the plate.  Malley Moore hit the shot to tie the game against Cameron to send it to extra innings and played great at third.  Baylee Omelina caught most of the tournament and was awesome at the plate.  Harlie Hoch backed up Baylee and ran for her and scored several much needed runs.  Morgan Terry and Marysol Lopez also played great and allowed the girls to get a much needed rest when they could.  Katy Allen pitched like a warrior on the mound and was solid at the plate.  Taylor Dise dug deep and pitched her heart out as well as hit the ball hard like she can and in the end, Lauren Woodard showed heart stepping in and throwing a great game to close the night out.

The Messenger would like to congratulate the 2021 Fireballs for winning their second State Tournament and we look forward to covering these girls as they move forward into high school.