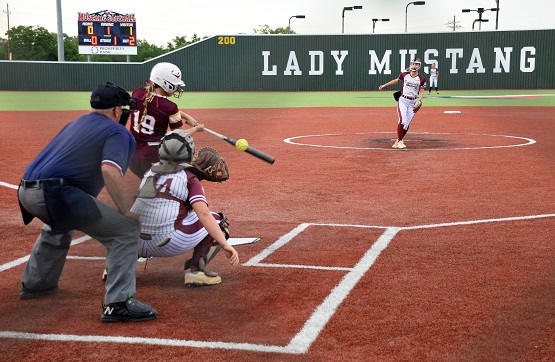 MADISONVILLE – The Grapeland Sandiettes were not supposed to make it this far. Graduation, injuries, move-outs, a lack of cohesion, COVID-19 and coaching changes had wreaked havoc on a team that just two years ago was expected to compete for a state championship.

Yet, here they were and on Friday, the Sandiettes geared up to take the field in Madisonville against a Top Ten ranked Thorndale Lady Bulldogs team in the Area Championship.

For a little while, the Sandiettes looked like they might give the Lady Dogs a run for their money but in the end, Thorndale simply had too much as they defeated Grapeland 15-5 and 23-5 to win the Area Championship and advance to the Regional Quarterfinals.

In Game One, Grapeland sent Jaycee Graham to the pitchers’ circle to start the contest. Emilee Baker led off the game for Thorndale and slapped a double into left. A pop-up to short from Natalie Garcia held Baker at second, but a single from Kelsey Kovar brought her across the plate for the game’s first run.

Graham shook it off as she coaxed a fly ball out from Raeghan Carlson and then fanned Reagyn Trahan on three pitches to close out the Lady Dogs’ half of the first.

The Sandiettes tied the contest at one when they came in to bat. Dori Ginn got the nod for Thorndale and she gave up five-pitch walk to Kiera DeCluette to open the bottom of the first.

DeCluette promptly stole second but was held at the bag when Makayla McCombs grounded out to short. Kayleigh Lively drew a walk to bring Graham to the plate and on a 1-2 pitch, Ginn got a little wild and sent one to the backstop.

DeCluette and Lively both advanced but Graham couldn’t catch up with a fast ball from Ginn and struck out. That brought Jessi Cunningham to the plate and on a 2-2 count, Ginn uncorked another wild pitch.

DeCluette raised home from third to tie the game at one while Lively advanced to third. Unfortunately, Lively made too big of a turn towards home and was picked off to end the inning.

Thorndale reclaimed the lead in the top of the second. Cassidy Eubanks led of the inning with a single to center and advanced to second on an Emily Reeves sacrifice. Graham caught Landri Martinka swinging at strike three and it looked like Graham might escape without any damage.

Unfortunately, a double from Bailee Baker knocked in Eubanks from second and when Emilee Baker’s pop up was misplayed in the outfield, B. Baker scored from second while E. Baker raced around the bases to cross the plate and make the score 4-1.

Graham got Garcia to ground out to first to end the Lady Dogs at-bat and when the Sandiettes came in from the field, they showed they came to play.

Cunningham resumed her turn at the plate and drew a walk to open the bottom of the second. Hailey Boehm had a quality at-bat, but struck out. Cheyenne Lomax followed in the order and reached on an error, sending Cunningham to second.

Kalani Barnett grounded out but moved Cunningham to third and Lomax to second. Anna Cutshaw was up next and on the first pitch she saw from Ginn, she slapped it into left, driving in Cunningham and moving Lomax to third. On the play, Cutshaw took second.

Talk about intimidation, DeCluette’s reputation as a clutch hitter preceded her to the plate and without throwing a pitch, the Thorndale coaching staff intentionally walked her to load the bases.

That brought McCombs to the dish and she reached on an error which allowed Lomax to sprint home. With the bases still juiced, a second consecutive error on the Lady Dogs allowed Lively to reach first safely while Cutshaw made her way home to tie the score.

A passed ball gave DeCluette the opportunity she needed and the senior took advantage to make her way home and give the Sandiettes a 5-4 lead.

Ginn eventually managed to coax Graham into flying out to center to end the inning and that was when the wheels fell off for Grapeland.

A single run in the top of the fifth gave the Lady Dogs a 10-run lead and when Grapeland couldn’t answer back in the bottom of the inning, the game was called due to the run-rule.

The two teams were back at it on Saturday afternoon and once again, the Sandiettes gave the Lady Dogs a run for their money in the early going. A 12-run second inning from Thorndale, however, spelled disaster for the girls from Grapeland.

To their credit, the Sandiettes started off strong as they plated four runs in their first at-bat. DeCluette led off the game with a double and when the ball was mishandled in the outfield, the speedy senior made it all the way home to give Grapeland the early lead.

McCombs followed and was hit by a pitch from Eubanks, who got the start in Game Two. Lively followed and hit into a fielder’s choice, but beat out the throw to first. Graham followed with a single and the bases were jacked with no outs.

A wild pitch gave McCombs the opportunity to score while the runners moved up a base. A walk to Cunningham re-loaded the bases. After Boehm lined out to short, an error pushed Lively across the dish to make the score 3-0. A walk to Lomax kept the bases loaded and when Kalani Barnett hit a hard shot to short, Graham scored. Barnett was thrown out at first and then Cutshaw grounded out to end the inning. After a half-inning of play, however, the Sandiettes led 4-0.

The lead didn’t last long as Thorndale came roaring back in the bottom of the first to take a 5-4 lead. To their credit, the Sandiettes fought back in the top half of the second to tie the game at five when Graham drove in Lively from second with a single to center field.

When the Lady Dogs came up to bat in the bottom of the inning, they put the game away with four homeruns, a triple, three doubles and a pair of singles to take a 17-5 lead after two innings.

Try as they might, the Sandiettes were unable to generate any offense while the Lady Dogs scored four more in the third and two in the fifth to win by a final score of 23-5.

While it isn’t be the way the Sandiettes wanted their season to end, the girls showed true character this year as they stuck it out when a lot of other players may have just folded their tents and gone home. From all of us at The Messenger, congratulations on a very successful year and have a wonderful summer break!! 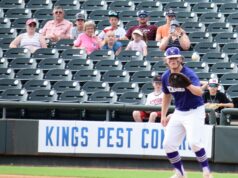 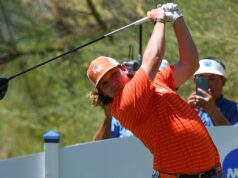 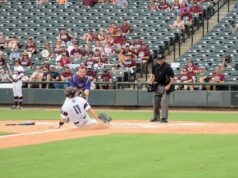