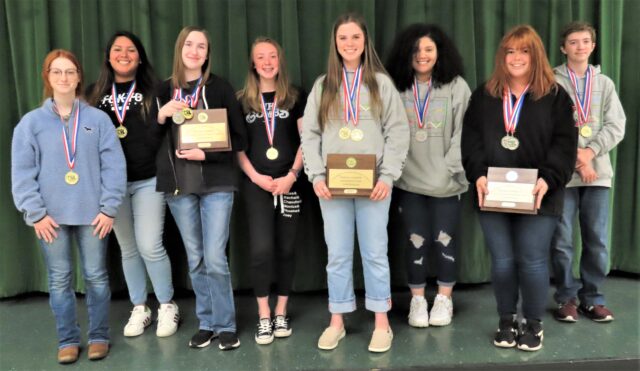 The state competition has traditionally been held in Austin, but with social distancing, this year was split into 26 hubs across the state. There were four state schools competing in the 2A division. Latexo’s team score was 540; Lindsay had 430; Woodsboro had 334; and Eldorado had 170.

Senior Sydnee Craven said: “I’ve never worked so hard for anything in my life.”

Team coach and LISD Math teacher Audrey Cravens stated: “The math team worked hard all year for this competition hoping it would not be canceled again.  I’m proud of how hard the team worked for this victory. To win state takes hard work, dedication and perseverance. We start having after school practices the first week of school even though the district competition is not until March.”

The Latexo Current Events team took 3rd in UIL state in their division. The team included Brenna Ashley, Angel Schave, Ebony Perez and Emily Bird. The LISD current events team has gone to state 11 times in the last 16 years, and has won state in 4 times.

Henderson Trial Continues
Chickens, Booze, Lawsuits and Trash
Normal Dell Jones: The Lady, the Legend and the End of an Era