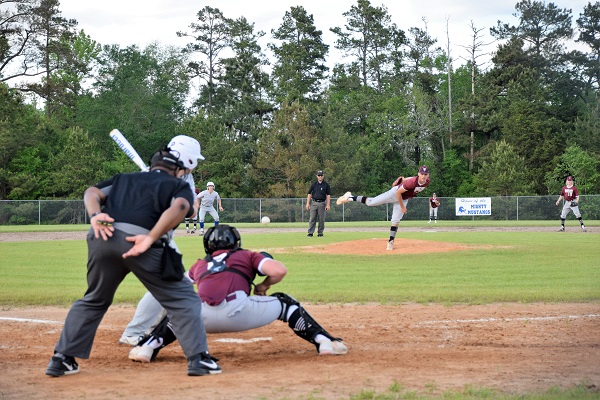 SLOCUM – In a make-up game from earlier this season, the Grapeland Sandies traveled to Slocum on Saturday for a District 21-2A contest.

Grapeland came into the game knowing they had to win out to make the playoffs and hope to get a little help along the way. Slocum has had a down year this season and looked to play the role of spoiler.

The game remained close throughout as the Sandies were outhit by the Mustangs. Five errors, however, led to Slocum’s unraveling as Grapeland pulled out a 7-3 win, to keep their playoff hopes alive.

Lex Rich got the start for the Mustangs and got into a little trouble right off the bat. Cole Goolsby drew a walk and advanced to second when Jax Vickers beat out a throw to first. After Cooper Sheridan popped out in the infield, Jason DeCluette grounded out to short but an error allowed Goolsby to motor around the base paths and cross the plate. Rich held the Sandies right there, however, as he struck out Cameron Navarette to end the top half of the inning.

Cooper Sheridan was on the mound for Grapeland and he also ran into a little first inning trouble. He gave up a lead-off double to Luke Gibson while Rich followed with a single to drive him in and tie the game at one.

Following the back-to-back hits, Sheridan settled down to strike out the next three batters he faced – Lincoln Smith, Jacob Nugent and Zack Coble – to end the inning.

Grapeland struck back in the top of the second to regain the lead, 2-1. Jayce Elliott reached on an error and moved to third on a Jacob Vaden single to right. Peyton Prater fanned while Slade Harris flew out to right.

Cole Goolsby was up next and slapped a shot to short. The ball was bobbled just long enough for Goolsby to beat out the throw while Elliott raced home to give the Sandies the lead. Vickers followed in the order, but grounded back to the mound to retire the side.

With a 2-1 lead, Sheridan mowed down the Mustangs in the bottom of the second. After Jose Molina fanned, Sheridan caught Ryan LaRoche looking at strike three. Jacob Easley was hit by a pitch but Sheridan regrouped to strike out Cade Peters to end the inning.

Neither team was able to muster any offense in the third or fourth innings, but in the top of the fifth, Grapeland plated a pair of runs.

Harris led off with a fly ball out to center. Goolsby walked but Vickers lined out to center and it seemed Rich would have another easy inning. Goolsby stole second and third and when Sheridan reached on an outfield error, Goolsby trotted home to make the score 3-1.

Gibson came on in relief of Rich and threw a wild pitch to move Sheridan to second. Sheridan then stole third while DeCluette walked. A passed ball brought Sheridan across the plate to push the lead to 4-1.

An error and a walk loaded the bases, but a nasty third-strike pitch to Vaden ended the Grapeland threat.

The Mustangs trimmed a run off of the Grapeland lead when they came into bat. Easley drew a walk and Peters was hit by a pitch. Gibson was up next and sacrificed the runners to third and second. Rich followed in the batting order and lofted a fly ball to deep center, deep enough to allow Easley to tag up and score, making it 4-2.

That was all the Mustangs could get, however, as Sheridan struck out Smith to end the inning. The Sandies tacked on two more in the sixth while Slocum added a run in the bottom of the inning.

It wasn’t enough, however, as Grapeland plated another run in the top of the seventh and then held Slocum scoreless in the bottom of the inning to pick up the 7-3 win.

Rich was saddled with the loss after he pitched 4.2 innings. He gave up four runs on two hits. He also struck out four and walked two.