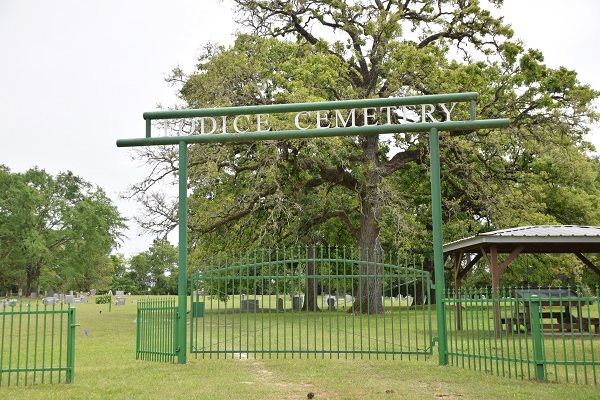 HOUSTON COUNTY – Houston County has a new historical marker and it was unveiled at Fodice Cemetery on Thursday, April 22.

A ceremony to celebrate the unveiling was organized by the Houston County Historical Commission (HCHC) and the Chair of the HCHC – Wanda Jordan – opened the program and said, “On behalf of the Houston County Historical Commission, thank you for coming out. It is an honor for us to help the Fodice Cemetery, the community and families involved here in celebrating their particular heritage in this part of the country.”

“We know how much work goes into getting one of these markers and how much dedication and how much love has to go into it,” she continued. “Most of the people here will have either grown up here, gone away some where to work but then came back to be closer to home.”

Following the invocation, Jordan turned the program over to Reggie Berry whose family had its roots in the Fodice community.

After recognizing several of those in attendance, Berry said he grew up in Fodice.

“My history here really only goes back to 1960, from what I can remember. Growing up in this community was great for me. I can remember some of the stories my uncle used to tell me. He told me all about the things that went on in Fodice,” he said.

“When I was putting up this marker,” Berry added, “I read it and it appears that everything started with Mr. (Thomas) Nelms from Pennington.”

The marker indicates Nelms moved several families and their slaves from Georgia to the Fodice Community in Houston County. In 1869, after the Civil War, he helped freed slaves set up farms in the area. The first to settle here was John O’Neill (1830-1915). The Fodice Community grew to include a cotton gin, grist mill, general store and post office. Citizens organized a Colored Methodist Episcopal Church in 1885. Classes were held in the sanctuary until a separate schoolhouse was built in 1900. It was later consolidated with the Pennington School District.

“Some of the funnier things my father used to tell me about Fodice – just before you get to the old church, look over to the left and there’s a little house sitting over there. On Sundays, my father used to tell me all the men from Pennington, Smith grove and Pleasant Grove would all meet there and that was the gambling place. They would gamble every weekend,” Berry explained.

He added that was sort of how the community got its name.

“The history said there was a family that came from Fordyce, Arkansas. I don’t know if that was proven, but there is another name they call it and that was four dice which must have been because of that gambling house. They just said the heck with it and let’s just call it Fodice,” he said with a laugh.

Once Berry concluded, Jordan gave a special thank you to Barbara Wooten, a HCHC and Fodice Community member.

Wooten commented, “It took me close to a year to get this done but it also took several years because the people who build these couldn’t do it.”

Jordan added, “We have Barbara to thank for this and several others (monuments). She has been instrumental in helping more people in this county get (historical) markers than we can even imagine. She has spent a lot of her life dedicated to the marker program and we appreciate it.”