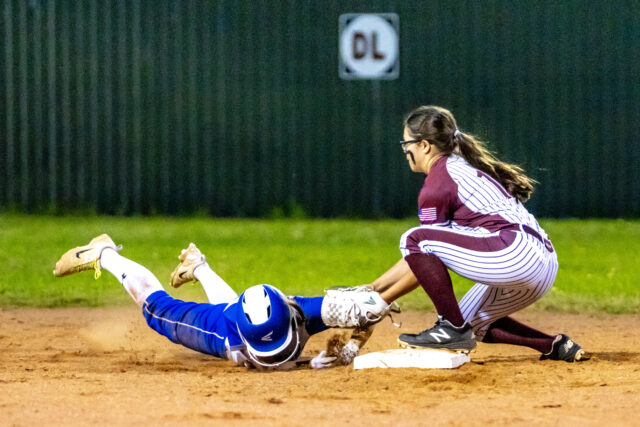 GRAPELAND – The Grapeland Sandiettes were rained out on Friday of last week which resulted in the postponing of their game against the Slocum Lady Mustangs until Monday.

The game had huge playoff implications for the Lady Mustangs while the Sandiettes had already clinched the third playoff seed from District 25-2A. If Slocum was to win, they would capture the fourth seed but if they lost, the Lady Mustangs would fall into a tie with the Latexo Lady Tigers, necessitating a play-in game.

Jaycee Graham was in the circle for the Sandiettes and had an easy go of it in the first inning. She got Landis to pop-up a 1-0 pitch for the first out and then caught Marlee Lasiter looking at strike three. Bella McNeill was up next and she fanned on three pitches to end the top of the first.

Lasiter was in the circle for Slocum and she also had a fairly easy inning. She coaxed Keira DeCluette to bunt back to her for a 1-3 force at first but then gave up a double to Makayla McCombs. Grapeland was unable to follow up as Kayleigh Lively struck out while Graham flew out to center to end the inning.

Both pitchers worked an uneventful second but in the top of the third, Slocum broke the ice to score three runs. Rayli Teems grounded out to lead off but Graham hit Kolbie Bush with her next pitch. A single from Landis moved Bush to second. Lasiter was up next and was called out for catcher interference.

McNeill followed in the order and drove in Bush from second with a single to center while Landis moved to second on the play. Gibson was hit by a pitch to load the bases and an error on an Abby Taylor fly ball allowed Landis and McNeill to score. On the play, Gibson tried to score but was gunned down at the plate to end the Slocum half of the third.

Anna Cutshaw grounded out to open the bottom of the third and DeCluette followed suit. McCombs was up next and slapped her second double of the game. It was all for naught, however, as Lively grounded out to end the inning.

Graham had a rough fourth inning but managed to get out of it unscathed. She got Williams to pop-up back to the circle for the first out, but an infield error allowed Addie Bowman to motor safely into second.

Teems flew out to center for the second out but Graham plunked Bush and gave up a single to Landis to load the bases. Fortunately, Graham managed to regain her composure and struck out Lasiter on three pitches to end the Slocum threat.

When the Sandiettes came in from the field, they exploded for six runs to take a 6-3 lead. Graham led off the bottom of the fourth and reached on an error. She moved to second on a passed ball while Jessi Cunningham drew a walk.

Haley Boehm was up next and doubled into center, driving in Graham and moving Cunningham to third. Cheyenne Lomax drew a walk to load the bases but Kalani Barnett hit into a fielder’s choice. A single from Cutshaw drove in Cunningham from third and kept the bases juiced.

DeCluette drew a walk which pushed Boehm across the dish to tie the game at three. McCombs was up next and hit into a fielder’s choice which gave Barnett enough time to sprint home and give the Sandiettes their first lead of the game at 4-3.

Lively followed in the order and grounded back to Lasiter who fired home to catch Cutshaw at the plate. Graham helped her own cause on the first pitch she saw as she drove it into center field, driving in DeCluette and McCombs to make the score 6-3.

Lasiter finally managed to get out of the inning but the damage was done. When Graham went back to the circle, she gave up a double but struck out the side to end the top of the fifth.

Following a rough fourth inning, Lasiter mowed the Sandiettes down in order to send the game into the sixth inning.

The Lady Mustangs trimmed the Sandiettes’ lead to one in the sixth. Teems grounded out to open the inning, but Bush drew a walk and moved to second on a wild pitch. Landis flew out to left and just when it looked like Graham might wriggle off of the hook, Lasiter reached on an error. McNeill was up next and doubled to left to drive in both Bush and Lasiter. Gibson followed in the order and grounded out to short to end the top of the sixth with the score now 6-5.

After Lasiter took care of business in the bottom of the sixth, Slocum scratched out a run to tie the score. Abby Taylor reached on an error and Williams brought her home with a double to left. Graham then got the next two batters to ground out and struck out Bush to end the top of the seventh with the score tied, 6-6.

With the game on the line, Grapeland came through in the clutch. Cunningham drew a walk to open the bottom of the seventh and moved to second on a Boehm single to center. Cheyenne Lomax followed in the batting order and delivered a four-foot winning hit. On a full count, Lomax laid down a bunt. Cunningham broke for third, but Slocum’s Gibson fielded the ball and threw towards the bag. The ball sailed on the catcher and Cunningham sprinted home to give the Sandiettes the 7-6 win.

Graham picked up the win with seven innings of work. She gave up six runs (only one earned) on six hits, struck out 10 and walked two.

Lasiter was saddled with the loss after pitching six plus innings. She gave up seven runs (four earned) on seven hits, struck out three and walked five.

The loss means Slocum will have a play-in game for the fourth seed out of District 25-2A. The Lady Mustangs will face the Latexo Lady Tigers in Latexo on Saturday, April 24 with the first pitch at 6 pm.