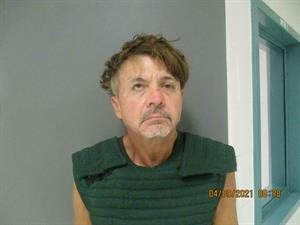 CROCKETT – A Crockett man is behind bars after he allegedly kidnapped a woman from the Knights Inn in an attempt to abscond with her social security check.

The incident occurred on Friday, April 9 and came to light when Crockett Police Officer Kerri Bell was dispatched to the Crockett hotel in reference to a welfare check.

When Officer Bell arrived at the location, she met with the manager of the hotel who informed her she was concerned about one of her tenants.

According to an affidavit of probable cause filed by the police officer, the tenant had expressed a desire not to leave the hotel with a man later identified as William Travis Erwin, 59.

“Employees stated they did not take the comment seriously at the moment, however, a man (Erwin) backed up to the (tenant’s) room and began to load up all of (the tenant’s) belongings from the room,” the affidavit reported.

The manager reported she went to the room in question to see what was going on and when she met Erwin, he slammed the door in her face. The manager went on to inform Officer Bell she attempted to reach the tenant’s son by phone and while she had him on the phone, she went back to the tenant’s room to ask him what relation Erwin was to the tenant.

Erwin stated he was her cousin but when confronted about her son saying he had no idea who he was “… Erwin began to yell at her to get away from his car, claimed to be an attorney and drove away with (the tenant) in the passenger seat, leaving her wheelchair behind.”

The manager also informed Bell she was able to get a picture of the vehicle with a paper license plate. She added the tenant had informed her she had recently received a $17,000 disbursement from Social Security and believed Erwin was trying to swindle her out of the money.

At approximately 3:15 pm, the affidavit stated, deputies with the Houston County Sheriff’s Office (HCSO) located Erwin’s vehicle in question at his residence. The HCSO deputies indicated as they approached the house, they looked through the vehicle’s windows and saw what appeared to be blood in the backseat.

The deputies knocked on the door of the residence and identified who they were. Despite hearing people inside the house, according to the affidavit, no one answered the door.

“At about 3:45 pm, more deputies and Crockett police officers arrived at Erwin’s residence. They utilized their police vehicle sirens and loud speakers to try and communicate with Erwin called 911 and communicated he was not going to come out of the house voluntarily,” the police report indicated.

After seeing what appeared to be blood in the vehicle and acting on the belief the tenant was being held against her will, the law enforcement officials made the decision to enter the house using keys provided by a relative of Erwin’s.

The affidavit reported once the officers entered the bedroom, they were able to establish communication with Erwin, who was barricaded inside a closet.

“Erwin refused to come out of the closet. The victim was also heard inside the closet. Officers tried to force open the closet door, but Erwin used his body to try and prevent officers from making entry. The door was eventually broken and officers were able to overpower Erwin. Officers entered the closet and placed Erwin under arrest. The victim also taken out the closet,” the affidavit reported.

When the officers attempted to interview the victim, it became apparent she was suffering from mental health issues and did not understand what was happening.

Erwin is currently held at the Houston County Jail on bonds totaling $16,500.

**UPDATED**Arrest Made in Tadmor Homicide
Can You Hear Me Now?
Early Voting Underway