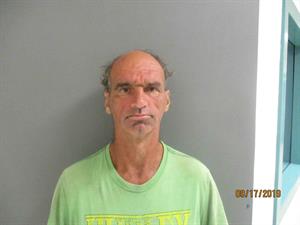 CROCKETT – An alert neighbor helped take a burglar off the streets of Crockett when she noticed a male suspect acting suspiciously near the residence of a friend.

William Michael Martin, 53, was taken into custody on Friday, Feb. 26 and charged with burglary of a habitation stemming from events on Sunday, Feb. 21.

According to an affidavit of probable cause, Crockett Police Officer Adolfo Garcia was dispatched to a residence in the 1300 block of E. Goliad Ave. on Feb. 21 at approximately 4:48 pm in reference to a trespassing complaint.

Once Officer Garcia arrived at the location, he met with the homeowner “… who stated her neighbor told her a white male had gone inside her house. (The neighbor) stated she knew the man as ‘the panty bandit.’”

The neighbor went on to state the suspect usually walked down Goliad Ave. with a backpack and thought he might live at the RV Park near the American Legion Post.

She described the suspect to be an older white male who was heavy set, with a bald head.

“After she described the male,” Garcia stated in his report, “I asked her if the male’s name might be Billy and she confirmed. With this information I was able to conclude that the suspect was William Michael Martin, due to prior contacts I have had with him.”

Garcia further indicated that earlier in the day, he had observed Martin near the 1300 block of Goliad Avenue, walking east towards Loop 304.

The witness provided a written statement in which she recounted while she had gone to check the mail, she observed Martin exiting the homeowner’s residence with something in his hands. The witness added Martin returned inside of the residence and came back out only after she went back inside of her residence.

Martin was taken into custody on Friday, Feb 26 and charged with burglary of a habitation, a second- degree felony.

Martin’s bond was set at $10,000 and he remains in the Houston County Jail.