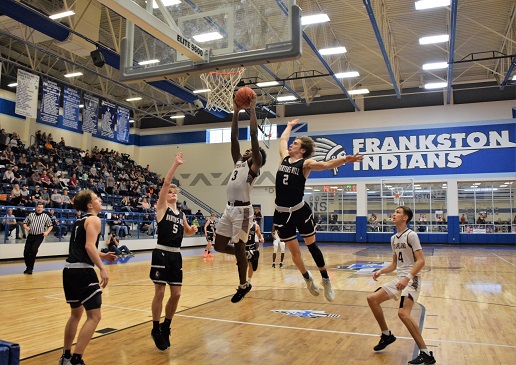 FRANKSTON – The date of the 2020-2021 Region III Regional Quarterfinals had been circled on the calendar since the UIL realignments and playoff brackets came out last year. Why, you may ask?

The Mustangs won the 2020 Region II Regional Tournament and advanced to the State Tournament in San Antonio. The Sandies lost to the defending Class 2A State Champions – the Shelbyville Dragons – in the Region III finals. Unfortunately, the 2019-2020 UIL State Basketball Tournament was abruptly shut down – nearly in mid-dribble – because of COVID-19.

Fast forward a year. It was time for a change, according to the powers-that-be, and the UIL realigned the various schools in Class 2A, moving the Mustangs into Region III, where the Sandies remained. The preseason brackets showed if Martin’s Mill won District 19-2A and Grapeland won District 20-2A – provided the two survived the Bi-District and Area Rounds – they would meet in the Regional Quarterfinals.

The Mustangs had been ranked #1 in Class 2A throughout the season while the Sandies had been ranked either #4 or #3. Grapeland held up their end of the bargain by taking out Frankston in Bi-District and Mart in the Area Round.

Martin’s Mill also held up their part of the deal by hammering Lovelady in Bi-District and then dispatching Rosebud-Lott in Area.

With the showdown between #1 and #3 set, the two teams traveled to Frankston on Saturday afternoon for a 2 pm tip-off. After a somewhat confusing start to the game, the Sandies took control of the contest in the early going.

The Mustangs, however, came storming back after halftime to tie the game at 61 by the end of the third quarter. In the final eight minutes of play, the two teams engaged in a back-and-forth battle before foul trouble caught up with Martin’s Mill which allowed Grapeland to win it from the free throw line by a final of 81-75.

Before the clock began to tick in the first quarter, the Sandies found themselves down by a count of 1-0 after Grapeland had been assessed a tech for hanging on the rim after the referees announced their presence.

The Mustangs’ Carter Jones made one-of-two from the line and Martin’s Mill took possession of the ball on the side. When they were unable to convert their possession, the Sandies worked the ball into the front court where Michael Dancer erased the Mustangs’ lead with a floater to give Grapeland a 2-1 lead.

The remainder of the quarter saw the Sandies frustrate the Mustangs with their quickness on defense. Still, Martin’s Mill was able to adjust and pull to within 18-15 by the end of the first eight minutes of play.

Cadarian Wiley led Grapeland’s offensive attack in the first quarter with six points while Dancer had four. Omarian Wiley drained a three as both BJ Lamb and Riley Murchison found the scoring column with two apiece. Keizion Ashford closed out the Sandies’ scoring by making one-of-two from the charity stripe.

The Martin’s Mill first quarter scoring came from Logan Morrow with five while Dylan Morrow dropped in four. Jones had three for the Mustangs while Colton Powers had two and Tanner Waynick chipped in one.

The second quarter saw the Sandies open up a double-digit lead over the Mustangs. Grapeland pushed its lead to five with 7:21 remining in the half and then eight with 4:49 left.

The frustration started to show for Martin’s Mill as they tried to force Grapeland to turn the ball over. The Sandies, however, were able to work around the increased pressure and the attempt at forcing turnovers resulted in the Mustangs running into foul trouble.

Grapeland opened up a 13-point lead at the 3:29 mark when Ashford channeled his inner Chris Paul for an easy two. Ashford had the ball in the low post with two Mustang defenders guarding him. Rather than trying to power up what would have been a difficult shot, Ashford remained on the floor.

He took the ball and faked a pass to a cutting C. Wiley. The two Martin’s Mill players went for the fake and Ashford was left all by his lonesome to put in an uncontested layup.

The Mustangs managed to cut the lead to 11 before the end of the quarter and then sliced it to eight when Jones hit a long-distance three with five seconds left in the half.

The five-second cushion was more than enough time for a Grapeland answer. The Sandies caught the Mustangs off-guard after the three from Jones. A quick inbounds pass, then a bullet to Lamb left the All-State player with a wide open three-point attempt. He gathered himself and with the clock speeding toward zeroes, Lamb launched a rainbow from in front of the Grapeland bench.

He knew it was good when he let it go and as the horn sounded, the ball singed the twine to give the Sandies a 44-33 lead at the half.

The Morrow brothers kept Martin’s Mill in the game as Dylan dropped in eight while Logan had five. Jones hit the aforementioned three while Waynick closed out the Mustangs’ first half scoring with two.

Lamb exploded for 13 points in the Sandies’ second quarter while Ashford started to heat up with six. C. Wiley continued to torment Martin’s Mill with five from inside the paint while younger brother Omarian added a basket to help Grapeland take an 11-point lead into the locker room at halftime.

Following the break, the Mustangs began to chip away at the Grapeland lead. After a two from the Sandies, Jones connected on back-to-back long balls for Martin’s Mill to cut the lead down to five.

Baskets from Ashford and Murchison helped extend the Grapeland lead back to nine with 3:31 left in the third, but another pair of threes from Martin’s Mill cut the lead down to three with 1:27 left in period.

Fouls began to plague the Mustangs in the third but when the horn sounded to end the quarter, Martin’s Mill had tied the game at 61.

Ashford stayed hot for the Sandies in the third with nine points, while C. Wiley had three. Murchison and Lamb both had two as O. Wiley made one of two from the charity stripe to set the stage for the final period of play.

D. Morrow poured in nine third quarter points for Martin’s Mill while Powers went for seven. Jones had the two early threes in the period as both L. Morrow and Jose Valenzuela also connected from behind the arc.

With a trip to the Regional Semis at stake, the two teams broke their respective huddles for the last eight minutes of one team’s season.

Ashford put the Sandies ahead with a quick basket to start the fourth quarter but on the Mustangs’ ensuing possession, D. Morrow hit a deep three and was fouled on the shot. He converted the free throw for a four-point play and gave Martin’s Mill their first lead of the contest since the score was 1-0.

C. Wiley knocked down a huge pair of free throws to tie the game at 65 with 6:37. As previously mentioned, fouls started to play a factor in the Martin’s Mill game plan.

Grapeland was in the double bonus with 4:23 left in the game when Christian Moss fouled out for the Mustangs. While Moss hadn’t scored, he had pulled down double-digit rebounds and clogged the middle of the lane. Another big blow for Martin’s Mill came when L. Morrow fouled out shortly after Moss.

As time started to become a factor, Murchison dropped in a lay-up, while Lamb was fouled on back-to-back possessions. He converted two-of-four from the line to give the Sandies a four-point lead with 3:39 remaining.

The boys from Sandieland extended their lead to five with just over a minute left, but a three from Jones at the 28 second mark made it a one possession game. That was as close as the Mustangs would get, however, as Lamb closed out the game from the line to help Grapeland upend the #1 Martin’s Mill squad by a final of 81-75.

On the game, the Mustangs were led in scoring by Dylan Morrow with a game-high 31 points. Carter Jones hit four threes as part of his 16 points while Logan Morrow was also in double figures with 13. Colton Powers dropped in nine while both Tanner Waynick and Jose Valenzuela had three apiece to round out the Martin’s Mill scoring.

BJ Lamb recorded his first triple-double of the season for the Sandies with 22 points, 10 rebounds and 10 assists. He also had two steals. Cadarian Wiley also had 22 points for Grapeland to go along with nine rebounds, two assists and two steals. He also blocked three shots.

Michael Dancer added four points, pulled down four rebounds and handed out four assists while Johnny Lamb closed out the Grapeland point production by making one of two from the line.

Asked about the second half surge by the Mustangs, Coach Doughty commented, “They were the #1 team in the state for a reason. We knew a run was coming. They got hot shooting the ball and in hindsight, I probably should have called a timeout.”

“I told our team to stay the course,” he continued. “We had the game plan that we had and we had executed it well up to that point. We didn’t want to get away from that but rather we just wanted to re-emphasize the things we had already been successful with.”

Concerning the way his team was able to contain the Martin’s Mill three-point shooting in the first half, Doughty laughed and said, “We got lucky! We did a really good job of closing out and I thought we did a good job in the second half, but they just hit some shots. The hardest part of this game is sometimes it’s just make-or-miss. We forced them into some tough three-point opportunities in the first half and also in the second half. They were just making them in the third quarter.”

With the win, the Sandies now move on to the Regional Semi-Finals where they will play the Gary Bobcats. The game is scheduled to be played at the Lufkin Middle School Competition Gym on Tuesday, March 2 with a 6:30 pm tipoff.