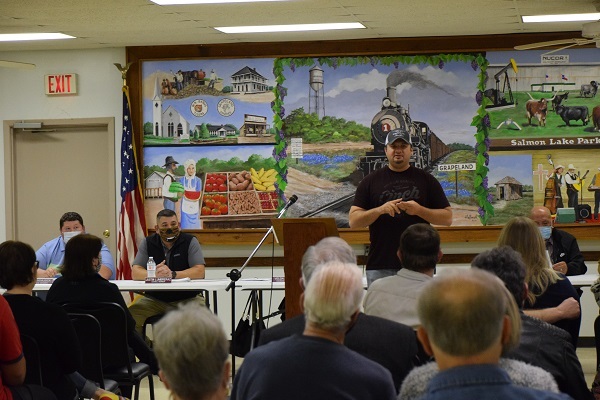 GRAPELAND – A called meeting of the Grapeland City Council was held on Monday, Jan. 25 for the purpose of discussing whether to make the city of Grapeland a sanctuary city for the unborn.

Mayor Mitchell Woody began the meeting shortly after 6 p.m. and thanked the approximately 75 people in attendance for showing up at the Grapeland Event Center.

“The first thing I would like to do is dispel any rumors you may have heard. One, there is no abortion clinic coming to Grapeland. That is not the case. Two, the use of sanctuary city for the unborn. The word sanctuary has been used before like in California for illegal immigrants. They don’t get funding and that type of stuff. That is not the case here,” the mayor said.

Woody said he had spoken with the mayors of three other Texas cities including Waskom, Rusk and Big Spring.

“Pretty much all of them told the same story at separate times. They put the ordinance on the agenda, there was a big crowd. They passed it and there was some fallout at first. Pro-Life, Pro-Choice people put up billboards and the other ones would tear them down. A few of the cities did catch a lawsuit. They caught the lawsuit from the Lilith Foundation (Fund) and Planned Parenthood,” he explained.

The mayor went on to say the proposed ordinance was written in such a way as to be able to have all the lawsuits dropped.

“These three mayors I have spoken with,” Woody continued, “a year or more later for each one of those towns, each one said it was water under the bridge and no one is talking about it or anything like that. Each one of those cities took a stand for what they believed in, fought over a little bit of flack and they are all stronger for it today. All three said they have zero regrets for passing this ordinance.”

Woody added he had spoken with an attorney in Austin, Jonathan Mitchell with the law firm Mitchell Law, LLC who said he would represent the city of Grapeland for free if the municipality became involved in litigation over the matter.

At that point in the meeting, Woody yielded the floor to Mark Lee Dickson, a director of Right to Life East Texas.

Dickson introduced himself and said he was not only affiliated with the Right to Life organization, but was a pastor at a church in Longview, Texas and also the founder of what is called the Sanctuary Cities for the Unborn Initiative.

The minister explained he didn’t just wake up one morning and think it was his mission to encourage cities to outlaw abortion.

“As a minister of the Gospel of Jesus Christ, I would find myself on the sidewalk of the nearest abortion facility. For me in Longview, it was in Shreveport, La. I would go to that abortion facility and do everything I could to encourage those women to trust in the Lord Jesus Christ with all of their heart – to not lean on their own understanding of what brought them there – but to acknowledge the Lord and trust in Him to lead them away from that place. While I was there, we saw a number of lives saved on that sidewalk just from preaching the Gospel and letting women know there is hope. We ended up giving people a place to live, clothing, the whole nine yards. We even offered to adopt those children,” Dickson said.

Eventually, the abortion facility in Shreveport was forced to think about closing and contemplated relocating just across the Texas border to Waskom.

During this time, Dickson said he was inspired by the Bible verse found in Amos 5:15 which states, “Hate the evil, and love the good, and establish judgment in the gate: it may be that the Lord God of hosts will be gracious unto the remnant of Joseph.”

“I started thinking about this idea that God cares about cities and what would happen if an abortion facility moved into Waskom.  It’s not Austin’s problem. It’s not Washington DC’s problem. It would be the problem of Waskom. I started looking at that passage and saw there was a responsibility of cities to be a watchman and not allow things to come into the city gates that might harm the people. That was all I needed to know. I reached out to the mayor of Waskom and he said what do I need to do? I said pass an ordinance outlawing abortion within the city limits. From there he said expedite the ordinance,” he said.

Realizing it had never been done before, Dickson reached out to State Senator Brian Hughes in Tyler who recommended Jonathan F. Mitchell who had served as the Solicitor General of Texas and had been a law clerk for Supreme Court Justice Antonin Scalia.

As he continued, Dickson explained what the ordinance did and did not say.

Seventeen other cities had passed the ordinance, Dickson indicated, and said Grapeland would be the 18th if the agenda item passed.

After several more minutes, Dickson yielded the floor back to Woody, who informed the audience it was time for public comments.

Woody read off six comments which been submitted to him in writing. This was followed by approximately 15 members of the community who voiced their support for the ordinance.

Following the public comments portion of the meeting, a motion was made, seconded and passed by a margin of four in favor with one abstention from Councilman George Pierson.