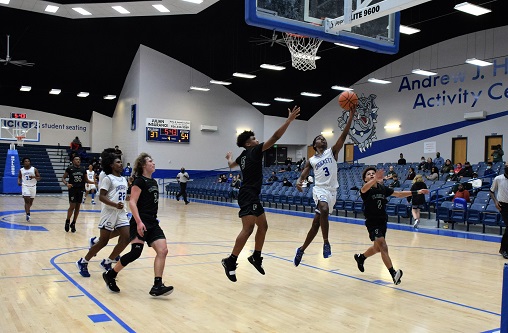 CROCKETT – The Crockett Bulldogs were back in action on Tuesday as they welcomed the Franklin Lions to the Andrew J Hopkins Activity Center for a District 20-3A matchup.

The Bulldogs were coming off of a strong showing against the Teague Lions on Friday and were looking to make a dent in Franklin’s district lead but poor shooting did them in as Crockett fell by a final score of 62-43.

The two teams played evenly through most of the first quarter as Franklin managed to take a slim, two-point lead after the first eight minutes of play. Tayshawn Simon dropped in a pair of threes to lead the Bulldogs with six points in the period. Courtney Byrd added four while both Carlester Nealey and DJ Walker had two apiece.

The Lions were paced by Devyn Hidrogo with six first quarter points while Seth Spiller had four. Hayden Helton and Marcus Wade both connected from behind the three-point line to round out the first period scoring.

As the second quarter got underway, the Bulldogs had a chance to tie things up or take the lead at the six-minute mark of the period. A missed shot, however, allowed Franklin to go on a 19-4 run to end the first half and take a 39-23 lead into the locker room.

Simon had four points for the Bulldogs in the second while Byrd and Jalen Patton both had two, Zandrick Anderson closed out the half by making one of two from the line.

Helton and Hidrogo paced the Lions with eight points apiece in the second. Spiller, Marcus Wade and Bryson Washington all had two while Darren Dougherty made a free throw to end the first half scoring.

Following the break, the Bulldogs remained ice-cold from the field. Walker managed to score eight in the third while Bre’Dron Tucker hit a three. That was it, however, as the Bulldogs trailed 51-33 after three periods of play.

Malcolm Murphy came off the bench for Franklin and dropped in seven points to pace the Lions’ third quarter attack. Hidrogo was three of four from the line while Helton added a basket to push the Franklin lead to 18 with one quarter left to play.

Try as they might, the Bulldogs simply could not overcome the deficit in the final period of play. Crockett managed to cut the lead to 13 with just under three minutes remaining in the contest, but that was as close as they got as Franklin went on to win by a score of 62-43.

Crockett’s fourth quarter points came from Simon with four while Anderson, Walker and Riley Rischer all had two apiece.

Dougherty had four for Franklin while Hidrogo added three more to his total in the fourth. Murphy and Wade split the remaining four points equally.

On the game, Franklin was led in scoring by Devyn Hidrogo with a game-high 20 points. Hayden Helton was also in double figures for the Lions with 13 while Malcolm Murphy had nine. Marcus Wade dropped in seven, Seth Spiller added six, Darren Dougherty had five and Bryson Washington chipped in a basket to round out the Franklin scoring.

The Bulldogs were paced by Tayshawn Simon with 14 points and DJ Walker with 11. Courtney Byrd netted six while Zandric Anderson and Bre’Dron Tucker had three each. Carlester Nealey, Jalen Patton and Riley Rischer all had two apiece to account for the Crockett scoring.