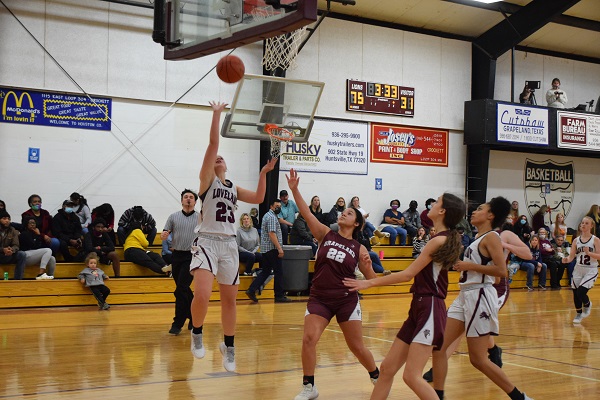 LOVELADY – The Grapeland Sandiettes were hoping to get back in the win column on Tuesday night when they hit the road to Lovelady for a District 20-2A matchup.

The Sandiettes have faced an uphill battle this season as they have tried to replace four starters from last year’s State Semifinalist team while trying to deal with COVID-19 related issues. Tuesday’s game was no exception as Grapeland was without two starters.

Regardless, the Sandiettes laced ‘em up and took on a hungry Lady Lions team that had been waiting three years to extract a little revenge on the girls from Grapeland. Down two starters to a solid Lovelady team, the game went about as expected as the Lady Lions blasted the Sandiettes by a final score of 86-31.

Lovelady jumped ahead early in the contest and never looked back as they opened up a 17-9 lead after the first eight minutes of play. Rajanae Polhamus led the way for the Lady Lions with nine points in the early going while Macie Larue dropped in four. Aaliyah Jones and Shyanne Pipkin added two apiece to round out the Lovelady scoring in the first.

The second quarter saw the Lady Lions work inside for 16 of the 20 points they scored in the period. Jones powered her way for 10 while Polhamus added another six. Pipkin hit a pair of free throws and Shelby Pugh netted a basket to make the score 37-20 at halftime.

Christi Shepherd came alive for the Sandiettes in the second quarter as she dropped in seven points. Beazley added two and Lila Munoz also had a bucket to close out the Grapeland point production in the first half.

The third quarter saw Lovelady pull away from Grapeland as they scored 22 while the Sandiettes could only put up nine. LaRue became a force in the third as she poured in nine points in the period. Pipkin and Polhamus both had four while Jones had three and Haley Davidson chipped in two.

Mary Jane Watson found the scoring column for Grapeland with four points in the third quarter while Shepherd had three and Sa’Riah Davis had two.

The fourth quarter wasn’t much better for the Sandiettes who only scored two points on a pair of free throws from Shepherd.

Pipkin took over for Lovelady in the fourth as she dropped in 10 points. Jones and Pugh both went for six while LaRue and Polhamus both had two. Davidson made one of two from the line as Lovelady pulled away from the Grapeland to win by a final score of 86-31.

On the game, the Sandiettes were led by Christi Shepherd with 12 points. Kyelan Beazley went for eight and Mary Jane Watson had four. Cyshia Black added three while Sa’Riah Davis and Lila Munoz both scored two apiece.

The Lady Lions were led by Aaliyah Jones and Rajane Polhamus with 21 points apiece. Shyanne Pipkin netted 18 while Macie LaRue had 15. Shelby Pugh had eight and Haley Davison had three to close out the Lovelady scoring.