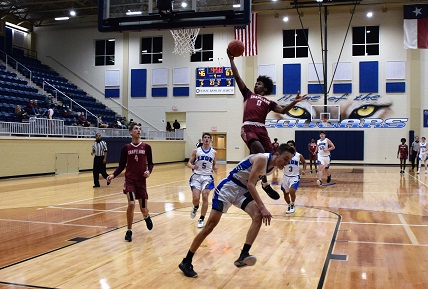 JEWETT – The Grapeland Sandies opened defense of their district title on Tuesday as they traveled to Jewett to take on the Leon Cougars in the District 20-2A opener for both teams.

The Sandies have won 12 straight district titles and are looking to make it a baker’s dozen this year and if the Jan. 5 game is any indication, they shouldn’t have any issues as they cruised to an easy 83-53 road win.

The Sandies took a little while to get warmed up but when they did, Grapeland showed flashes of brilliance. For example, with the scoreboard reading 9-6 in the first quarter, the Sandies brought the ball up-court.

Once they got their offense set-up, Grapeland swung the ball around the perimeter and across the court to Keizion Ashford who popped free for a three-pointer. On the Cougars ensuing possession, Ashford stole the ball and drove inside for an uncontested lay-up.

Ashford paced Grapeland in the first with eight points while Cadarian Wiley worked inside for six. Johnny Lamb and Riley Murchison both connected from behind the arc while Omarian Wiley also added three to close out the first period scoring.

The Cougars’ first quarter points came from Tito Gonzalez with three while Tyson Cornett, Logan Noey and John Robinson all had two. Tyler Kirschner made one of two from the line to close out the Leon scoring in the period.

As the second quarter began, the Sandies began to open up their offense. C. Wiley was a beast in the paint as he snagged at least five boards which led to six points. Ashford and Murchison both dropped in four while Michael Dancer and J. Lamb had three apiece. O. Wiley had two and BJ Lamb got in the scoring column with a pair of free throws as the Sandies opened up a 47-25 lead at the break.

Leon was led by Cornett with six points in the second while Gonzalez, Kirschner and Stran Copeland all hit from behind the arc.

Following the break, Grapeland came out of the locker room ice-cold from the field. J. Lamb dropped in five for the Sandies while both Murchison and C. Wiley had three apiece to keep Grapeland in the lead by a score of 58-44.

Kirschner and Noey led the third quarter charge for the Cougars with six apiece while Cornett added five and Ryan Baker had a basket to cut into the Grapeland lead.

Grapeland erased any hopes of a Leon comeback in the fourth quarter as the Sandies tightened up on defense which led to easy transition baskets. Cole Goolsby came off the bench to drain a pair of three-pointers, while Murchison added five more to his total. Ashford, C. Wiley and O. Wiley all had four while BJ Lamb added a bucket to help secure the 83-53 Grapeland win.

On the game, Leon was led in scoring by Tyson Cornett with 15 points while Logan Noey had 13 and Tyler Kirschner netted 12. Tito Gonzalez added six, Stran Copeland hit a three while both Ryan Baker and John Robinson had two apiece to close out the Cougars’ point production.

The Sandies sere paced by Cadarian Wiley who posted a double-double with a game-high 19 points and 12 rebounds. He also had four assists on the night. Keizion Ashford was also in double figures with 16 points to go along with three boards, six assists and four steals.

Riley Murchison also had a good night as the sophomore poured in 15 points to go along with three rebounds and one assist. Johnny Lamb was also in double-figures with 11 points. Omarian Wiley added nine points and pulled down 13 boards.

Cole Goolsby knocked down a pair of three-pointers, BJ Lamb had four and Michael Dancer chipped in three to close out the Grapeland scoring.