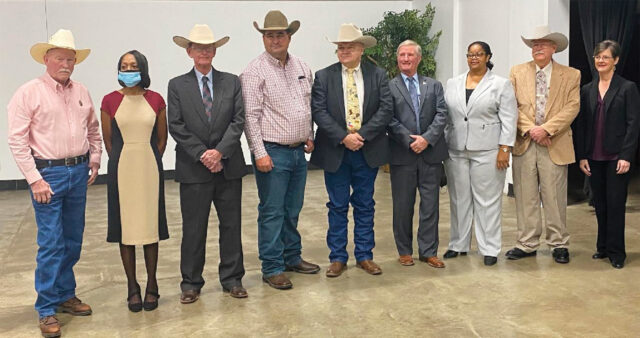 HOUSTON COUNTY – It didn’t take Houston County long to put some new and some familiar faces to work in the New Year as county officials were sworn-in bright and early on the morning of Jan. 1.

Because of COVID-19 restrictions, the ceremony was moved from the District Courtroom in the Houston County Courthouse to the Crockett Civic Center. The venue didn’t matter, however, as the elected officials greeted their families, friends and others in attendance with warm smiles on the chilly January morning.

Among those who were sworn-in were Randy Hargrove who takes the helm of the Houston County Sheriff’s Office (HCSO) from outgoing Sheriff Justin Killough. Hargrove has an extensive background in law enforcement and in his most recent position, he served as the District Attorney’s Investigator.

Once he had been officially administered the oath of office, the Sheriff Hargrove swore-in his deputies, including newly appointed Chief Deputy Roger Dickey. Dickey moves over to the HCSO from his position as the county’s Emergency Management Coordinator.

His position will be filled by former Sheriff Justin Killough. Killough had agreed to serve as Houston County’s Sheriff on an interim basis after Sheriff Darrell Bobbitt had resigned his position in early 2020.

Another new/familiar face who was sworn-in on Friday was Laronica Smith who takes over the Tax Assessor Collector’s Office following the decision of longtime Tax Assessor-Collector Danette Millican not to seek another term in office. Smith had previously served as Chief Deputy Clerk in the tax office.

Smith’s former position has been filled by Tena Smith who previously served as Senior Clerk – MV.

Another new face administered the oath of office during the Friday ceremony was Gene Stokes who takes the reigns as Precinct Three County Commissioner. Stokes replaces longtime Commissioner Pat Perry who decided not to seek another term in office.

Several familiar faces were also present for the ceremony and were sworn-in to another term in office. Those who are returning to their positions include: