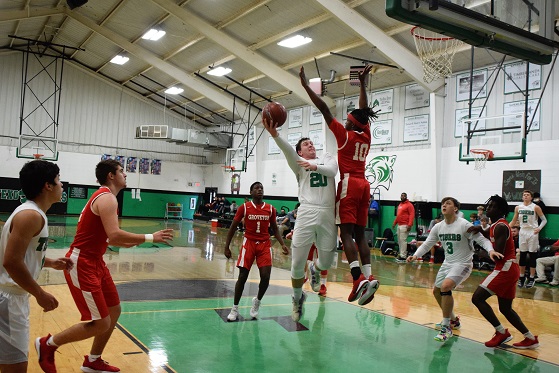 LATEXO – The Latexo Tigers were in action on Tuesday afternoon as they welcomed the Groveton Indians to town for the District 20-2A opener for both teams.

The Tigers and the Indians had shown promise, as well as progress, in their non-district slate of games. Each team had realistic hopes for a playoff berth, and surprisingly enough, the first game of league play could possibly go a long way in determining who would make the postseason.

Latexo plays a slow, methodical style of basketball and the pace seemed to frustrate the Indians, who looked more comfortable in an up-tempo, transitional pace. In the end, it was the Tigers’ who prevailed as they wore down the Indians to secure the district opening win by a final score of 46-35.

A low-scoring first quarter saw the teams trying to get a handle on their opponent’s game while looking for an offensive rhythm of their own.

Groveton’s King Jones dropped in five points in the opening eight minutes of play while teammates Malachi Stewart and Bryon Thomas had two apiece to give the Indians a 9-8 lead after one.

The Tigers’ were paced by Sam Jones with four points in the period while Tyler Lumbreraz and Malachi Reece had two each.

The scoring didn’t get much better in the second period as the two teams only combined for a total of 11 points. However, the Tigers did manage to pull ahead in the quarter and took a 15-13 lead into the locker room at halftime.

Latexo’s Eli Filer broke into the scoring column with four points in the second while Logan Ray added three to close out the Tigers’ first half scoring.

The Indians’ second quarter points came from Jones, who drained a three and Thomas, who made one of two from the charity stripe.

As the second half began, the Tigers’ methodical style of play began to take its toll on the Groveton defense. Latexo began to find open shots as the third quarter progressed and the shots that didn’t fall in the first half finally started to in the second.

Ray poured in eight points for Latexo in the third while Lumbreraz joined him with eight and Jones dropped in two as the Tigers opened up a 30-21 lead at the end of three periods of play.

Groveton’s shooting woes continued after the break as they only notched eight points as Jones put in five and Stewart added three.

The Latexo offense continued to fire on all cylinders as the Indians offense finally started to see a few shots begin to fall. Try as they might, Groveton was unable to get over the hump as the Tigers held on to defeat the Indians by a final score of 46-35.

Ray continued his hot shooting for the Tigers in the final period of play as he knocked down six points. Filer got in on the action with four while three other Latexo players – Jones, Lumbreraz and Jack Crow – all had two apiece to close out the Tigers’ scoring.

On the game, Groveton was led in scoring by King Jones with 16 points and Bryon Thomas with eight. Trenton Torregrossa dropped in a pair of threes and Malachi Stewart added five to round out the Groveton scoring.

The Tigers were led by Logan Ray with a game-high 17 points. Tyler Lumbreraz dropped in nine while Eli Filer and Sam Jones knocked down eight. Jack Crow and Malachi Reece both chipped in two apiece to account for the Latexo point production.