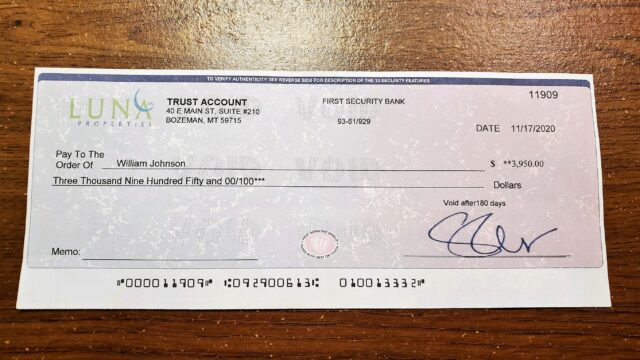 If it seems too good to be true …

EAST TEXAS – As the Holiday Season approaches, festive lights will adorn houses, Christmas trees will be decorated, turkeys and hams will be baked, roasted or fried and people will greet one another with “Merry Christmas,” “Happy Holidays,” or even “Happy New Year.”

While the stress level goes up for some during the last of November and the month of December, most people are genuinely nicer to one another at this time of year. There is, however, a certain group of people who tend to prey upon others during the Holiday Season.

They are crooks, thieves and scammers and if you’re not careful, you may fall victim to the newest scheme they have come up with.

Such was the case last week when this reporter received a check in the mail for $3,950. The check came in a 9”x12” brown envelope and the mailing label indicated it had been shipped as Priority Overnight mail using Fed Ex.

It was left on my front porch and the return address on the envelope indicated it was from a company called Citizens Energy Group, with an address in Indianapolis, IN.

Curios as to what was inside, I opened the envelope and found there was only a check inside. No check stub, no explanation, just a check.

It had my name on the “Pay To The Order Of” line and the amount showed $3,950. Well … at first, I thought this was too good to be true. But, I started looking at the check and it looked real.

Bear in mind, I have been working at The Messenger for right at 10 years and I’ve seen my fair share of scams. I’ve played along with the English Countess and Nigerian Prince to see just how far they would go before depositing untold millions of dollars into my bank account. I have even received an e-mail at work from my own e-mail address stating I had been kidnapped and escaped over the weekend, but needed approximately $10,000 to pay off certain nefarious characters in order to return home. Needless to say, I was stunned by that one.

Still, this check looked real and besides, who couldn’t use an extra $3,950? I asked my fiancé what she thought about it and after we determined how to spend it, she suggested I check with my bank first.

So, I went to bed but I couldn’t sleep. What if the check was real?

I got up and opened my trusty laptop to see what I could find out. While the envelope came from Citizens Energy Group, the check itself was written on a company called Luna Properties, LLC, located in Montana.

I even searched the bank the check was drawn on – First Security Bank – and lo and behold, it was also real.

Then there was the check itself. On the back of the check, it stated there were 13 security features. Being the inquisitive type, I looked for the security features and there they were. On the front of the check, there was what was called a heat sensitive shield which was supposed to fade when heat or touch was applied. I touched the spot and sure enough, it faded.

Maybe it was real.

Anyway, the next morning when I went to work, I showed my boss and a couple of co-workers the check and they all agreed it looked legit, but said I should probably go ask the bank.

Once I got to the bank, I debated on just filling out a deposit slip and dropping it into my account. This may sound cliché, but the struggle was incredibly real. Eventually, the tiny, little logical part of my brain took over.

Another bank officer was called in to look at the check. She said while it looked real, her mom had received something very similar and it was a scam.

Eventually, we got through to First Security Bank. That was surprising enough and my hopes for a $4K payday went up. Unfortunately – First Security informed us the account was fraudulent. I was crushed. There would be no windfall.

I wrote this article as a word of caution. Be careful at this time of year. 2020 has been rough on a lot of people and some will do whatever they can to acquire YOUR money. Had I deposited the check, the scammers would have had my bank account information and wreaked havoc on my financials.

Pay attention to what you receive in the mail and remember, if it seems too good to be true, it probably is.