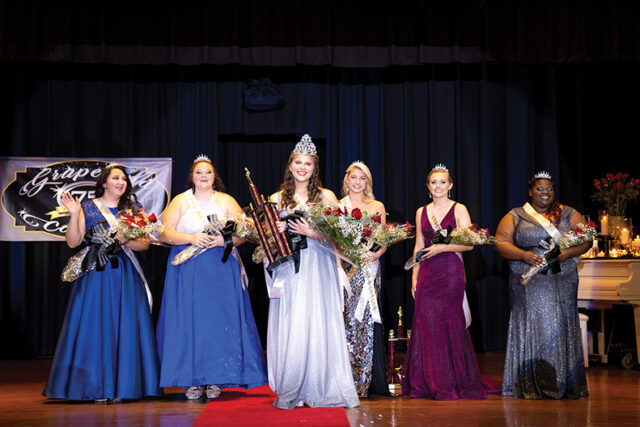 GRAPELAND – This was supposed to be the biggest celebration in the history of the Peanut Festival. It was the 75th year and the Grapeland Chamber of Commerce along with Peanut Queen Coronation Coordinator Tammy Hassell-Anderson had plans to make this a true Diamond spectacular. Then, COVID-19 hit.

Plans were scrapped. The carnival, the street dance and the parade were cancelled. For the longest time, it looked as if the Peanut Queen’s Coronation might also go by the wayside. Then, it was going to be virtual.

Eventually, however, restrictions were eased and the coronation was allowed to happen in a somewhat scaled down event. Still, for the six young ladies who braved a rollercoaster of emotions as well as the ebbs and flows of whether the pageant would even be held, Saturday, Oct. 17 was the night of their young lives.

The evening’s event started with an acoustic guitar performance by Andi Huff. This was followed by the public speaking and business wear categories.

After the ladies had completed this portion of the program, the audience was treated to a highlight of every pageant – the talent competition.

Before the girls returned to the stage, Hassell-Anderson spoke to the audience and said, “I will say the girls you have just seen on the stage, have salvaged a part of the tradition for our Peanut Festival. They have pushed ahead, stayed positive, worked hard and they were never negative.”

Once the pageant coordinator concluded, Stacy Perez led off the talent with a Broadway-style production of “When Will my Life Begin?” from the movie ‘Tangled.’ Macy Cutler was up next and provided the audience with a beautiful rendition of the song “Angel by Your Side,” by Francesca Battistelli.

Cierra Espinoza followed with a performance in sign language set to the song “Hallelujah” by the group Pentatonix. Cheney Boyd was the fourth contestant on stage and she performed a skit called “Funeral Fried Chicken.”

Mary Jane Watson was the next contestant to grace the stage and she performed a skit entitled “One Game of Golf.” Arionna Davis concluded the performances with her rendition of the song “Bright,” by Kehlani.

Once all of the performances had been given, the ladies disappeared backstage to get ready for the evening wear part of the competition. After a few moments, emcee Charlie Bobbitt began to announce the contestants who all made an elegant walk across the stage and up the catwalk.

It was now time for the big moment as the judges left the auditorium to tabulate their ballots. When they returned, the winners were announced.

The awards for Miss Photogenic and Miss Congeniality went to Miss New Beginnings, Arionna Davis. The Award for Most Talented was presented to Miss Callaway-Allee, Macy Cutler.

With only one award left, a drum roll sounded and Miss Frontier Camp, Cierra Espinoza was announced as the 75th Annual Peanut Queen. She was crowned by the 2019 Peanut Queen, KeKe Harris.

Following last year’s Peanut Festival Coronation, Pageant Director Tammy Hassell-Anderson decided during the 2020 coronation she would award a Director’s Heart Award to one of the candidates.

According to Hassell- Anderson, “This award is given to a participant, post-event, that would honor one who had exhibited good humor, good effort, and, above all, a good attitude under the stress of competition.”

She added, “These few weeks of preparation, deadlines and late-night practices are taxing on all of the candidates.  To compete is a challenging undertaking and nerves can become frayed.  I was proud of all the girls this year in the way they handled their work.  Unfortunately, only one can be crowned Queen.  However, I want them all to learn from the experience.  After the winner is announced, it can be deeply disappointing to the others.  In practices, we talk about and plan for the proper reaction to not being chosen.  It is their reaction to this moment that I like to see them exhibit grace and a sporting attitude. I want the Director’s Heart Award to go to someone who completes the competition with this approach.”

According to Hassell-Anderson, “Mary Jane was a joy to be around and was supportive of all the other candidates – throughout the event.”

The award is accompanied by a five-hundred dollar scholarship.