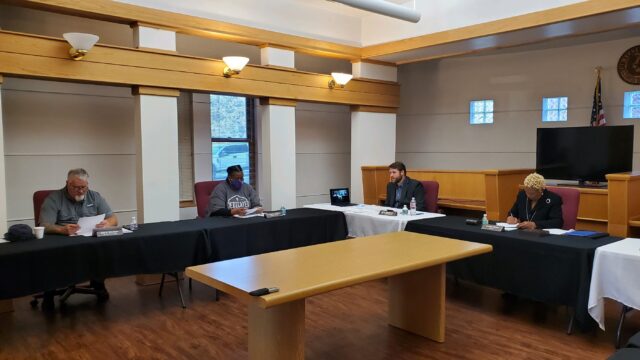 CROCKETT – The management and operation of the Porth Ag Arena took center stage during the regularly scheduled meeting of the Crockett City Council held on Monday, Oct. 5.

The mayor of Crockett, Dr. Ianthia Fisher, informed the council, “There were some concerns about where we stood with the ag arena. One of the things we wanted to go over was to identify what the concerns were, where we are right now and where we need to go and if there are any specific concerns anyone has.”

Dr. Fisher went on to say it had been many years since the memorandum of understanding (MOU) had been looked at or discussed by the council. She stressed, however, the Crockett Lions Club had done a fine job as far as maintaining the arena.

City Administrator John Angerstein added, “The last agreement, as the mayor mentioned, the last MOU was done on March 16, 1992. As far as the last agreement we had, it was 1988. It renewed after 10 years for another 10 years but we are still well past this.”

“Within the last MOU approved by the council in 1992,” Angerstein continued, “it spelled out some of the Lions Club responsibilities and some of the responsibilities of the city. Some of those are still applicable and some are possibly not. I guess some of our concerns are who is responsible when needs come up at the ag arena for maintenance or repair. We’re not sure how much revenue the Lions bring in and how much they can contribute towards that. I will say that whenever I have asked for an income statement or revenue statement, they have given us one, so, they are not trying to withhold information.”

The city administrator went on to say the facility is in need of having some work done. Among the areas Angerstein mentioned which should be looked at included the fencing, the gutters, the outside of the building and making the entrance to the facility ADA compliant.

Following a lengthy discussion, a decision on the matter was postponed until representatives from the Lions Club could meet with the council.

As the meeting continued, Angerstein addressed Coronavirus Relief Funds (CRF) which had been awarded to the city.

“One of the expenses we are allowed to put this toward is a match fund for the school district. For every dollar we provide, the school districts receive through TEA (Texas Education Agency) an additional three dollars through their allocation of CARES (Coronavirus Aid, Relief, and Economic Security Act)  funding. TEA received a significant amount of CRF while cities and counties did as well. A lot of cities and counties have had trouble coming up with enough valid purchases through the CARES Act so they (federal government) said if cities would commit some of their funds to buying Chrome Books, iPads or hot spots, for every dollar we provide they will match it,” he said.

Angerstein explained CISD had purchased approximately $90,000 in Chrome Books and indicated if the city allocated $20,000 to the district, TEA would provide an additional $60,000. He said the county had also kicked in $2,000 which would result in another $6,000 for the school system.

Following a brief discussion, a motion was made, seconded and unanimously approved to allocate $20,000 to CISD.